Buying Chicks? Watch for These 4 Afflictions

Do you plan to starting a backyard flock or add to your existing bunch? Inspect your chicks carefully for these four life-threatening conditions. 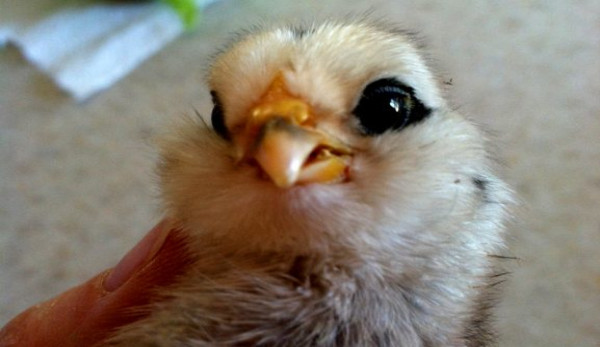 Willa was a little distraught. She had had gone chick shopping at a farm-supply store and left with two brand new babies. One, a robust little Silver-Laced Wyandotte, was happily peeping and exploring her new surroundings. The other, a teensie Welsummer, wasn‚Äôt faring as well. She was somewhat lethargic and droopy. Worse, she had a red-brown sore on the abdomen that was partially scabbed over and partially raw and weepy.

‚ÄúI thought the chick had dried poo on it, but it seems to be attached to the chick,‚Äù Willa explained, hoping I‚Äôd have a solution. I did, but it wasn‚Äôt a positive one. Her baby peep had omphalitis, a condition most frequently caused by faulty incubation. Chick mortality is high in the first two weeks of life, as Willa learned firsthand: The poor baby passed away a couple of days later.

During spring chick season, we sometimes find ourselves so enamored of these adorable balls of fluff that we just grab them and go, impatient to have them home where we can cuddle and ogle them as much as we want. If you plan to increase your flock size, take a few moments to carefully scrutinize your selections‚Äîin the brooder and up close‚Äîto rule out these four afflictions that can bring your love affair with your baby chicks to a sad and abrupt end.

The wound Willa noticed on her chick was its unhealed navel, a telltale sign of omphalitis. The navel might be inflamed, open and weepy, scabbed or a combination of any of these conditions. Sometimes the yolk sac is still attached and partially solidified. Often, the chick‚Äôs abdomen will be swollen. Causes of omphalitis include improper temperature or humidity during incubation, and bacterial infection from contaminated incubators and transportation cartons.

A chick suffering from omphalitis will typically have no interest in food or water, will seem depressed and droopy, and might be fluffed up and huddling near the heat. Since it did not properly absorb its yolk sac, the chick must receive some sort of nourishment and hydration; dehydration hastens death in omphalitic chicks. Add baby-chick electrolytes such as Sav-a-Chick to its water. Over-the-counter veterinary antibiotics can also be administered. Use an eye dropper to carefully place one drop of water at a time in the chick‚Äôs mouth. Don‚Äôt offer more, as this might cause the chick to aspirate. You can also use an antiseptic/sealant such as Blu-Kote on the chick‚Äôs open navel. This will offer some protection to the wound and also disguise the injury to prevent other chicks from pecking at it out of curiosity. Be sure to leave any bits of umbilicus and yolk sac attached; removing these can cause bleeding, further injury and infection.

Several years ago, a spur-of-the-moment chicken-math incident resulted in my bringing home one dozen straight-run, newly hatched Ameraucana chicks. Some were white, some were silver and all of them were absolutely adorable with their poofy little faces. One chick, however, soon displayed another facial characteristic: a scissor, or cross, beak. In scissor beak, the top or lower beak deviates sideways instead of aligning perfectly. The result is a chick who cannot properly peck, drink or eat.

Scissor beak is not immediately noticeable; it starts to develop two to three days after hatching. The deformity ranges from a mild separation of the top and bottom beak to a drastic misalignment resembling continually open scissors. The cause of scissor beak has not been fully determined; some scientists believe the condition results from improper incubation temperatures while others credit a recessive gene. Several breeds of chickens seem more susceptible to developing scissor beak, including Ameraucanas, Crevecoeurs and crested varieties.

Mild scissor beak can be treated by applying counter pressure to the shifting beak several times a day for several minutes each time. More severe cases, sadly, tend to result in the bird‚Äôs death, although occasionally a cross-beaked bird adapts and learns to eat and drink by scooping. These chickens tend to be smaller than normal because of their difficulty eating; during extreme weather, they are often at risk for dehydration, heat stroke and hypothermia. Freaky Beaky, as my sons named our chick (who’s pictured above), survived with her deformity for eight weeks, far longer than we had expected.

One of the most common chick afflictions, splay leg or spraddle leg, occurs when a baby bird‚Äôs legs spread apart to the point where it can no longer stand. This condition is instantly recognizable: The affected chick looks like a gymnast doing a split. Splay leg is typified by weakened ligaments; causes include nutritional deficiencies and nonsupportive flooring. Prevention is simple: Add a multivitamin to the chick‚Äôs waterer or a vitamin supplement to its starter feed, and make sure the brooder floor surface is rough and easily gripped, never slippery or lined with newspaper.

Splay leg in a young chick is easily treated by hobbling its shanks with medical tape. A hobble will not only keep the legs aligned in a forward position but also will help strengthen the weakened muscles. You might find it distressing to watch your hobbled chick trip and tumble its way around the brooder. You might find yourself constantly having to pick up the little peeper from where it toppled over. After a day or two, however, the chick should start adapting to the hobble and begin moving around with improved proficiency as its leg muscles start to strengthen. Left untreated, splay leg can lead to death, as the affected chick would be unable to reach food and water or get out of the way of the other chicks in the brooder.

Torticollis, or wry neck, causes a baby chick to tilt its head and neck upward as if it were Chicken Little, watching for the sky to fall. Also called stargazing because of how the condition manifests, torticollis makes it impossible for a chick to eat or drink on its own. The chick might be able to walk around at first, often unsteadily because it cannot see where it is going. The weight of its upward-tilted head eventually causes the baby to tip over backwards, often unable to get back up without assistance. Causes of torticollis are believed to include incubation issues and genetics; sadly, there is no cure.

Willa returned to the farm-supply store shortly after her Welsummer died, intent on letting the store know to check its chicks for life-threatening conditions such as the omphalitis that claimed her baby. While I‚Äôm uncertain if she gave the manager a piece of her mind, I do know she gave the store a bit of her wallet: she left with two new‚Äîand carefully inspected‚Äîbabies to keep her lonely Wyandotte company.