It's exciting to see your chicks hatch from their eggs, but keep an eye on your new little birds for these common conditions, some of which can prove fatal. 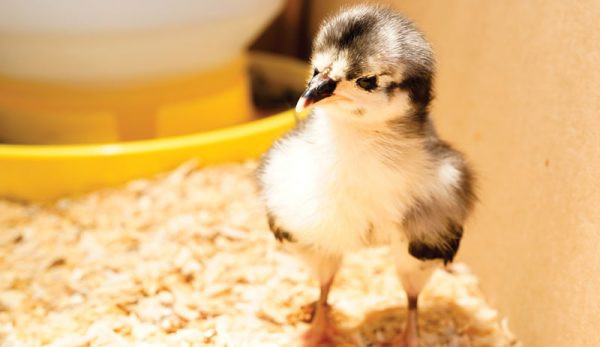 There‚Äôs nothing like the feeling you get when you look in the incubator and see the first pip of an egg. After 21 days of care, your chicks are about to come into the world. You can take a second to relax knowing you did everything right to get them to hatch. But there are quite a few reasons to stay on your toes.

You know you‚Äôll need to keep the chicks fed, warm and safe while they grow. However, even the most diligent chicken-keepers can run into a few problems with their newly hatched babies. Keep this reference list of common conditions close at hand when your chicks are about to hatch. You‚Äôll be ready for any issues that may come up!

Your chicks are running around, eating, drinking and look healthy. Then you notice one seems to be quieter and is breathing with its beak open. If you look closely, you may notice that chick has runny eyes.

If you observe long enough, you might hear a cough or sneeze. Can chicks catch a cold?

Respiratory issues are one of the most common issues you may see after hatch. And much like our own common cold, your chicks could suffer from symptoms that range from a runny nose, coughing, clicking when breathing, lethargy and swollen eyes.

If your chicks are suffering from what appears to be a cold, your first step is to check the conditions in your brooder.

Read more: Infectious bronchitis is a serious virus that can affect your birds.

Dust can be created from bedding. If you‚Äôve been using sand, cedar chips or sawdust, you should make a quick switch. Pine chips or newspaper shavings are less irritating, and switching bedding may decrease symptoms in your chicks.

While you might be tempted to give it a good spritz and scrub with bleach, that type of cleaning solution should be avoided. Bleach can mix with the ammonia in chick droppings and create a toxic atmosphere.

Instead of bleach, opt to clean your brooder with vinegar and water.

Stay on top of damp conditions, as chicks are tiny toddlers, and they can swiftly upend their water dishes and make a mess in a clean brooder. If they frequently dump their water, they‚Äôll have wet shavings. And wet shavings can cause respiratory illness.

Always keep shavings dry. If chicks frequently dump their water, switch to a poultry nipple system instead of a water trough.

If you have removed all possible irritants from the brooder, your chick is still sick and other chicks are showing signs of illness, you may have a more serious respiratory illness on your hands.

At that point, contact your vet. He or she will help you take steps to source out the nature of the illness.¬Ý

Pasty butt is exactly what it sounds like: a build-up of fecal matter over the vent hole of a chick. The chick‚Äôs stool has stuck to its body and built up a plug, and that plug will stop your chick from going to the bathroom normally.

When your chick can‚Äôt remove waste from its system, it backs up, and poison can be sent through their body. Left unchecked, this condition could result in death.

There are quite a few reasons why chicks develop pasty butt. Stress, lack of space, and chilly or too hot conditions can cause this issue in chicks. The key to helping your chicks stay healthy is spotting it quickly and removing the plug before illness sets in.

You can remove the plug over your chick‚Äôs vent hole yourself. Wear rubber gloves and gently run warm water over the plug. Once you‚Äôve softened the plug, attempt to gently pull it off with a soft cloth, cotton ball or paper towel.

After it has been removed, you can use the low setting on a hair dryer to dry the area. If it appears red and sore, apply a lubricant such as petroleum jelly to prevent further build up.

Pasty butt can happen to the same chick over and over again, so keep an eye on chicks that struggle with this condition.

Read more: Bringing home chicks rather than hatching? Look out for these issues.

Also known as splay leg, spraddle leg is a concern for all chicken-keepers. Your chick may hatch and not be able to get up, leaving the chick splayed out on its stomach, legs stretched out in a split position. It won‚Äôt be able to stand on its own, and it won‚Äôt be able to access food and water.¬Ý

Fluctuating temperatures in the incubator during hatching may cause this condition. It can also happen when the chick developed in a position that injured the tendons in its feet or legs. A slippery incubator floor can also be the culprit.

Whatever the reason your chick has spraddle leg, you‚Äôll need to intervene in order to help it recover. There are many different ways to treat spraddle leg. Some keepers recommend using a section of a Popsicle stick or adding a small section of wrap to each leg for support.

You‚Äôll need to check on your chick frequently and change the bandage every day until you‚Äôre sure it can support its weight on its own. You‚Äôll also want to ensure your chick is eating and drinking properly until it can move around normally.¬Ý

This isn‚Äôt one of the more common conditions, but scissor beak can appear after hatching or as chicks grow older. It will look as though the chick‚Äôs beak doesn‚Äôt line up properly, creating a scissorlike appearance. This condition may be caused by improper incubator temperatures, the way the chick is positioned in the egg or poor genetics.

You‚Äôll likely never know the reason why your chick has scissor beak, and there is no cure for this condition.

It‚Äôs possible for a chick with scissor beak to have a happy and healthy life, but you‚Äôll have to make a few adjustments to how it eats and drinks and watch over it as it grows. You‚Äôll want to put feed in a deep bowl or trough and not have it laid out thinly in a pan. Your chick will learn to use their beak as a sort of shovel to dig in and scoop food out.

A chick with scissor beak will also have an easier time drinking water if you use poultry nipples instead of a water trough.

Also called mushy chick disease, yolk sac infection is a common cause of chick death. It‚Äôs thought to be the result of bacteria present during incubation. The bacteria can enter the egg due to an unsanitized incubator, unclean thermometers or lack of hand washing before egg candling.

Yolk sac infection is one of the reasons why it‚Äôs so important to have a clean, sanitized incubator before you place your eggs inside and to always wear rubber gloves when candling eggs.¬Ý

Yolk sac infection appears as a mass outside of your chick‚Äôs body. This mass is unabsorbed egg yolk. Your chick needed to absorb the yolk for normal development. Because they could not absorb it before they hatched, it will be more susceptible to illness and may be smaller and weaker than other chicks.¬Ý

Unfortunately, your correction options are limited to wait and see. Most will die within 24 hours of hatching. If your chick does live longer, it may be a sickly and more prone to developing different illnesses as it grows older.

If you‚Äôve hatched your chicks, and they all look healthy and happy, without any eating or drinking conditions, why would one suddenly die? Sudden chick death can happen for a variety of reasons, including the following.

Chicks like to huddle to stay warm, and you‚Äôll find they gather in a spot under or near your heat lamp. If your brooder isn‚Äôt warm enough, they may pile up in one spot. That piling on to stay warm can lead to chick suffocation for any little ones in the bottom of the pile.

Make sure the heat in your brooder is sufficient so they don‚Äôt crowd in a corner.

When a chick is raised by a broody hen, she‚Äôll keep them warm, protect them, and show them how to eat and drink. If you‚Äôve hatched your own chicks and are raising them in a brooder, you are officially the mother hen.

Coccidiosis is a parasite that lives in the intestinal tract of chicks and thrives in warm, damp conditions. It can easily spread from one to another if bedding is damp or droppings are present in drinking water.

Chicks with cocci may appear tired and thin and will be reluctant to eat or drink.

Cocci can be treated by adding an antibiotic to drinking water. But left unchecked, it can spread and result in the death of some or all of your chicks.¬Ý

Preparation is key to your success rate when incubating eggs, and it‚Äôs also key to raising chicks. Knowing what could happen after the hatch will help you keep a watchful eye on your new babies. And that can help them grow up to healthy hens and roosters.

Upon observing your newly hatched chicks, you notice one chick can‚Äôt seem to hold up its head. It may be rolling all the way back or hanging limply off to one side. The chick may also be walking backward.

This condition is known as stargazing, and it may be caused by a vitamin B1 or thiamine deficiency.

While it can be disturbing to see in the brooder, stargazing is treatable with intervention. Ask your local farm-supply supplier if they have access to a multivitamin for chicks or brewer‚Äôs yeast. You‚Äôll just sprinkle either of these on your chick‚Äôs feed to add thiamine.

If caught early and the illness is due to a lack of thiamine, the addition of this vitamin should cause your chick‚Äôs condition to clear up.

This article originally appeared in the May/June 2021 issue of¬ÝChickens¬Ýmagazine.