Watch Out For The Harlequin Bug

This beautiful bug from Mexico can wreak havoc among your cole crops. 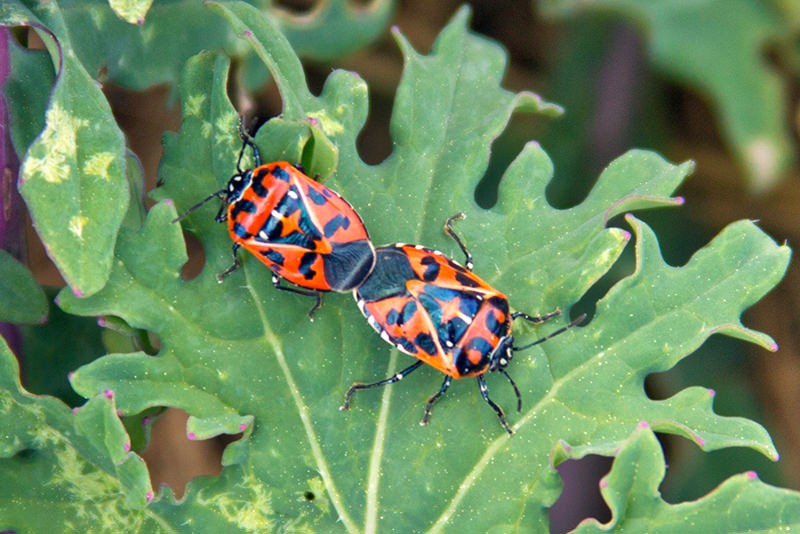 With fall approaching, I am thinking about my cool-weather crops and some of the common pests that can significantly impact the harvest. One such pest is the harlequin bug (Murgantia histrionica), aka the harlequin cabbage bug, which targets nearly all of the cole crops, such as cabbage, broccoli, cauliflower and collards. An invasive species from Mexico, the harlequin bug has been slowly working its way north across the United States over the last few decades. Established populations of this pest are found in nearly all southern states from the Atlantic to the Pacific, with some harlequins now identified as far north as Pennsylvania.

The harlequin bug is a cousin of the stinkbug and shares its distinctive shield-shaped body. Adult harlequin bugs are 3/8 inch long and are black with orange, yellow or bright-red markings that sometimes vary in color between seasons.

The pretty orange-and-black appearance belies the destructive nature of these sap-sucking insects, which can wipe out an entire crop when left uncontrolled. Symptoms of a harlequin-bug infestation include visible adult insects and the wilting of leaves that turn brown and quickly die. This damage is caused by the harlequinâ€™s saliva injected into leaves, liquefying plant tissue so that the insects can feed on it.

Sadly, there are very few organic sprays or pesticides that can effectively deal with harlequin bugs or their stinkbug relatives. The best plan, as is often the case with resilient insects, is to handpick these pests early in the season to help limit the exponential population growth that typically occurs in late summer and early fall.

Aside from physical removal, one of the best organic controls is use of late fall and early spring ground cultivation which can kill a large percentage of the overwintering adult harlequin bugs. Be sure to remove any remaining cabbage or broccoli plant debris after your harvest, as they serve as breeding sites for these pests. If the plant debris is infested with the pests, throw the organic matter in the trash instead of composting it.

Other methods that may be successful against these invasive insects are trap crops and floating row covers. If harlequin bugs are a common issue in your garden, consider planting mustard or kale away from the crops you plan to eat to act as a trap crop. Although time intensive and expensive, floating row covers are also effective for the control of harlequin bugs and many other common garden pests.