Watch Your Dog Around Your Pigs

Keeping pigs safe from the family pet is important, so watch that dog. 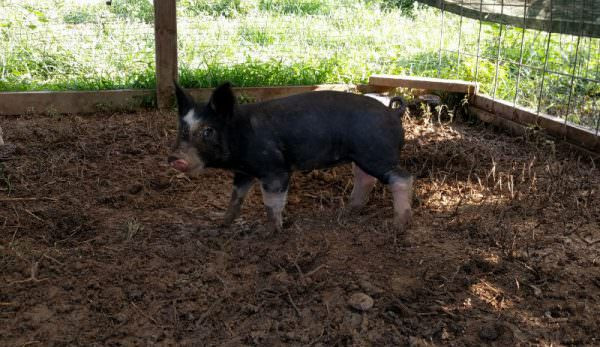 A good number of years ago, when my wife and I got the first four chickens of then-suburban flock, aÂ farmer friend of ours warned us in a gruff drawl, â€śWatch that dog of yours. You donâ€™t want him taking notice of those chickens.â€ť

My wife snickered and I bit the insides of my cheeks to keep from smiling. â€śThat dogâ€ť was a ten-year-old Labrador Retriever whoâ€™d lost the drive to chase (or even notice) a living thing that didnâ€™t approach him bearing food long before this moment. But the warning, of course, was genuineâ€”if unwarranted in the case of Charlie, who, even after moving with us to a farm filled with hundreds of free-ranging chickens, failed to acknowledge one of them until his dying dayâ€”and it was one we also heard when we brought home Blue the AustralianÂ Shepherd (who likes to herd the chickens) and, subsequent to Charlieâ€™s passing, Roscoe the Schnoxie (whoâ€™s nipped at a bird or two). We lucked out with our companions, but some dogs just canâ€™t fight theÂ instinctual urge to hunt a large, ground-dwelling bird, and if that’s the case with one of your dogs, you really should watch that dog.

But what I never heard was an admonition to watch our dogs around the pigs. And that really is a shame, because if chickens cause a primal tickle in a dogâ€™s brain, then pigs are like a full-blown siren.

A writing assignment years ago led me to a handful of stories about pigs raised as pets being attacked by dogs. In a few of these stories, the pigs and dogs lived in the same house and played together, then one day, the dog just â€śsnapped,â€ť attacking his buddy. So I brought my wariness of the interaction of these two species with me into my foray into farming: I watched my dogs get really weird around pigs, but they never got the opportunity to cost me a pig.

Pigs unleash a primal instinct in dogs. Though years of careful breeding have brought a once-wild species safely into our homes, thereâ€™s no getting around the fact that, buried somewhere in Fidoâ€™s DNA, an ancient wolf lurks. Some dogs with food issues can become wolf-like when stress and a perceived threat to their bowl combine, for instance. And some dogsâ€”more than many people understandâ€”tap into thatÂ inner wolf when a pig displays its â€śpigness.â€ť

Beyond predatory temptation (which is the same problem some dogs have with chickens; again, watch that dog), there are two main incompatibility issues that can lead a dog to attack a pig.

The first is that these two animals are very different species. Dogs recognize highly formalized social structures, or â€śpacks,â€ť and expect a pig to follow these roles, which is something pigs simply donâ€™t grasp. So when a pig has something a dog wants, and the dog sees itself as the alpha with a right to that thing, the pig will have no understanding of the dogâ€™s stance onÂ issue of the thingâ€”and an attack is likely. This situation is often compounded by a pigâ€™s curiosity and friendliness, which can hinder the animalâ€™s ability to recognize imminent danger and a need to run. Ergo, tragedy.

The second is what Iâ€™ve observed the most on our farm: Pigs drive dogs crazy. More specifically, a pig’sÂ high-pitched squeal is like a trigger for the dogâ€™s primal instincts. We learned quickly to lock the door behind us when we brought piglets in for castration, as the sound made our dogs throw themselves against the door trying to get in. We also learned to lock the doors to the farrowing shed, where our dogs would press their noses between the barn boards in response to piglets fighting for a teat. There are likely some fascinating neurological processes going on in a dogâ€™s head when a pig squeals, but what I can tell you is that itâ€™s inadvisable to allow that noise to occur when a dog has access to the pig. Because, as I already mentioned: tragedy.

Maybe you, like me, are a pig farmer with no notion of ever raising a pig inside the house as a pet. Your dogs respect the pig fences, and you wouldnâ€™t dream of allowing them into the farrowing barn. Why would I need to watch the dog around the pigs?

Many, if not most, pig breeders end up with a brand-new piglet in their home at some point. Itâ€™s certainly happened to me. And if that moment arrives for you, please remember to never leave your dog unsupervised with the piglet. Watch that dog of yours. Â Â