You can learn more about the health of your bees by observing the behaviors of the queen bee and the hive. 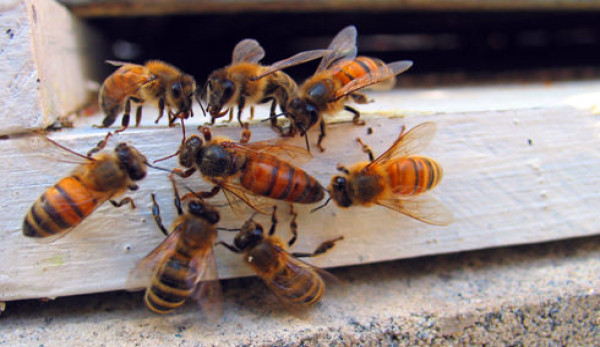 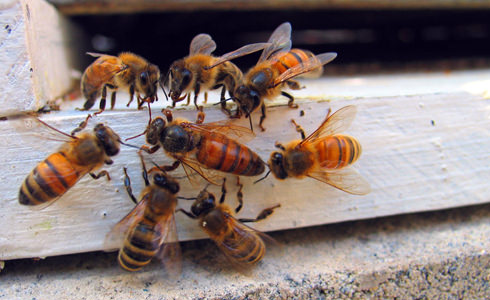 Look inside the beehive for signs of queen activity: bees carrying pollen, bees moving about the hive and bees in varying stages of development.

Inside the hive, thousands of bees seem to shimmer as they move away from observant beekeepers. Some slurp up honey while others immediately begin to clean up comb broken during the normal inspection process. Kathleen Prough, chief apiary inspector for the Indiana Department of Natural Resources, says observing the behavior of bees in and out of the hive provides vital information about a hiveās health.

Behavior Inside the Hive

āHow are the bees behaving when you inspect the hive?ā Prough asks. āIf they are running across the comb they may not have a queen.ā

The queen’s presence in a hive is evident by loosely organized bee activities: recently returned field bees carrying pollen, bees of differing ages moving about the hive with purpose and the presence of eggs in various stages of development. Without a queen the sense of organization disappears. Instead, bees may be more aggressive with the beekeeper, create a louder “roar” when the hive is opened and, of course, not lay new eggs.

There is other evidence of a queen bee that you can observe. This includes open cells with eggs (which can be difficult to see) in the bottom. After the eggs develop into larva, their cells are capped over for the completion of metamorphsis. Called brood, these capped cells are visible in a large cluster at the center of each frame. Clusters can be found on both sides of each frame and should be surrounded by cells containing pollen, water, and nectar or honey.

Also look for uncapped brood, bees of different sizes and ages, and a healthy pattern of brood in frames. Moving slowly through the frames, watch how the queen bee and her entourage behave, noticing where she and the brood are located within the bee hive. A healthy queen is orchestrating the worker bees in harvesting pollen nectar and bringing in needed water.

If you cannot find a queen, look for evidence that the hive is already working to produce a new one. Queen cells have a different texture than honey-comb cells and are larger and peanut-shaped once the queen begins to develop inside. More than one may be developing at the same time. The presence of queen cells may also indicate a hive’s preparation for a swarm during the spring months. Look for queen cells before purchasing a new queen bee for the hive.

Behavior Outside the Hive

Bees bothered by local wildlife may behave aggressively. Look closely at the bee hive for predator scratch marks at the entrance or a round dirt patch nearby. Skunks feed on bees by slapping them to the ground, rolling them around and eating them, leaving a telltale bare patch. Raccoons prefer drinking from sugary hive entrance feeders.

Bees cluster on the outside of the hive during the heat of the day. Sometimes called āwash boarding,ā the bees move outside to cool down the interior of the hive. If you watch their behavior closely, you will see the bees fanning their wings.

Outside the hiveās entrance you may find dead beesāan indicator of healthy hygienic behavior. Bees generally keep the hive clean by removing bodies and body parts. Beekeepers in northern climates may notice smatterings on the hive exterior during cold months. A break in cold weather will bring bees out to evacuate before temperatures drop again.

It can be hard to tell when a hive is preparing to swarm,ā Prough explains. āThe main thing with swarm prevention is making sure the queen has enough room.ā

“Be sure the queen has room to lay eggs. Add another brood box if the hive appears crowded,ā she says.

Keep an eye out for foraging bees on trees and in garden beds. Knowing the foliage local to your area can help you understand where bees are collecting pollen and nectar. Bees arriving home laden with pollen is an indicator of brood rearing.

Maintain a journal of your observations of bee behaviors inside and outside the hive. It can serve as a resource over time for tracking behavior, recording changes in the hive and gaining insight into a hiveās seasonal life cycle. If you have more than one hive, comparisons will help you gauge a hiveās strength.

About the Author: Professional writer Deb Buehler grew up on a hobby farm in central Indiana where she gardened, made applesauce, tapped sugar maples and cared for an array of animals. Today she and her husband, Craig, live in Indianapolis practicing a sustainable lifestyle that includes expanding an urban vegetable garden, buying locally, keeping bees and caring for dogs Abby and Tucker.