This Is Hobby Farming: A Brush With Destiny (And Water Buffalo) 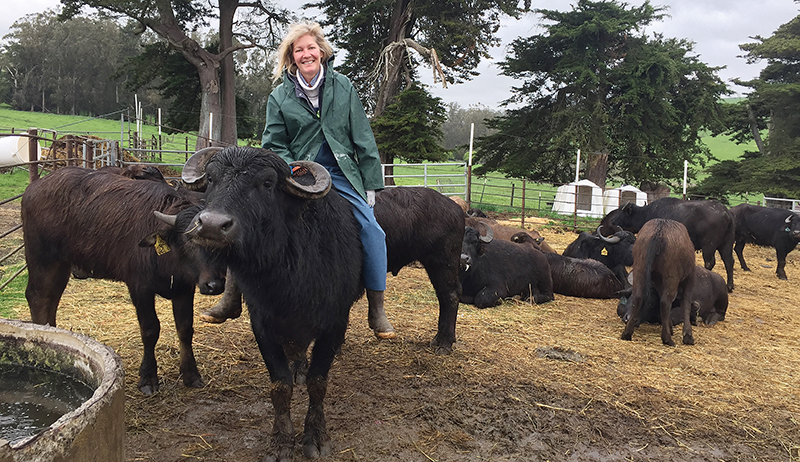 The rolling hills around the small Northern California town of Tomales are a classic rancher’s dreamscape: dampened by coastal fog, covered in rich green grass and dotted with the standard triumvirate of grazing sheep, goats and dairy cattle. In one corner pasture, though, there’s a sight guaranteed to make even the most seasoned back-road cruiser hit the brakes and do a double-take. Their wide, flat horns curving gracefully behind their ears, the water buffalo of Ramini Mozzarella placidly chew away at their grass.

Up close, the animals are at first intimidating, looking suspicious as a visitor approaches the pasture gate. When they detect no threat, the buffalo crowd close, begging for attention. Mops of long, coarse hair crown their heads, and Yoda-like ears give them a sweet, comic look.

On a cool, muddy April morning, a blonde woman, slight in stature and almost lost in a voluminous barn coat and heavy rubber boots, opens the gate to the corner pasture and shoos the herd across the ranch driveway to new grazing grounds. One might expect a rodeo, but the buffalo trot happily toward their new location, kicking and bucking joyfully at the prospect of new, thick grass. Audrey Hitchcock watches her herd with obvious pride. Despite the intimidating size of the animals and their threatening-looking horns, she is armed only with a small curry-type brush, tucked into her coat pocket.

Audrey and her husband, Craig Ramini, founded Ramini Mozzarella in 2009. It’s one of only a handful of water buffalo dairy farms in the United States. At the time, they were the only Americans making real mozzarella di bufala.

Before starting Ramini Mozzarella, Audrey had a burgeoning architecture career, and Craig was an economics major in search of the right profession.

“He tried the tech industry, Wall Street … he wasn’t satisfied,” Audrey says. “When I met him, he wasn’t happy with what he was doing. He wanted something more exciting, something that made more of a contribution.”

Both had a passion for animals, and they agreed that their new adventure should definitely include them.

“He thought about a dog-grooming business,” Audrey says, but she was not onboard with that idea, so they kept looking.

Their “aha!” moment came when Audrey’s brother returned from a trip to Italy raving about the fresh mozzarella made from water-buffalo milk.

Audrey and Craig started researching water buffalo and found they are not only hardy and able to survive well on low-quality food but they are also very sweet.

“They love human affection, and they can become like dogs if you put the time in,” Audrey says.

Thrilled about the prospect of working with these unusual animals, she was now 100 percent on board.

Starting a dairy is a risky choice, but starting a dairy never having milked a cow or made cheese was downright hazardous. Neither Audrey nor Craig had a scrap of experience. Undaunted, they moved ahead swiftly, locating five animals for their first small herd and setting up the dairy and farmstead creamery.

Having a field filled with friendly buffalo wasn’t enough. The new enterprise needed to start making money, and cheesemaking began in earnest. Handling the buffalo and getting them into the milking barn was a big challenge. Some of the animals that came from wild herds had never seen the inside of a barn.

“They didn’t like the regular milking stanchions and standing side-by-side like in a normal dairy,” Audrey says.

Craig designed two milking stations that position the buffalo nose to tail, in the center aisle of the milking barn. While there was initially some wrestling involved in getting them into the chute, Audrey and Craig discovered that brushing and scratching the buffalo helped the animals to relax.

Keeping the buffalo relaxed and happy means a release of oxytocin, which means they will let down their milk. During a recent milking session, she scrubbed one of her animal’s hindquarters with her trusty buffalo brush. The buffalo responded by curling her tail and arching her back. Water buffalo only produce about half as much milk as a dairy cow — although the butterfat content is typically triple, and the protein content double that of bovine dairy cattle — so anything that encourages production becomes a critical part of the milking routine, even if it’s just a bit of sweet talk and a session with Audrey’s brush.

“We figured out that they like to be in the middle so they can see the whole barn,” she says. “They like to be able to have their heads free.”

Unlike dairy cows, which are either bred to be hornless, aka polled, or are dehorned as calves, the water buffalo are heavily dependent on their horns.

“Their horns are very important to them,” she says. “They regulate their body temperature; they use them to nudge their babies around, to dig themselves mud puddles, and to communicate and establish rank within the herd. I see their horns as their hands.”

Horn density can also indicate dominance. When a cow in the dry herd gives birth and rejoins the lactating herd, she needs to reestablish her position.

“They put their nose in the air and tilt their heads and give what I call the stink eye,” Audrey says.

Sometimes, a newly introduced cow will immediately acquiesce, but oftentimes, the newcomer holds her ground and the two click horns in a minor scuffle. The animal with the denser horns generally takes rank over the other.

Partly due to innovation, partly to hard work and perhaps due to a big dose of beginner’s luck, Ramini Mozzarella was a hit. Craig and Audrey worked side by side, handling all aspects of production, distribution and caring for the herd. It was exhilarating but exhausting.

“When we first started, I was working on the ranch three days and doing architecture four days,” Audrey says. “I would lie in bed with every fiber of my body aching, amazed that Craig could even get up in the morning.”

By 2012, they were selling out of all the cheese they could produce. The herd had grown from five buffalo to 30. Craig and Audrey’s dream had become reality. But like dreams, reality can also take unexpected twists.

In 2014, Craig discovered he had non-Hodgkin’s lymphoma. Audrey struggled to keep the dairy running, and Craig struggled to stay alive. At first, it seemed they had both won their battles, but Craig finally lost his in 2015. Exhausted and grieving, Audrey shut down the dairy.

Audrey, though, is a lot like her buffalo: friendly but hardy and tough — a true survivor. Just a month after Craig passed, she reopened, this time running the entire operation on her own. Her customers were clamoring for the creamy, delicious mozzarella that they couldn’t get anywhere else. After a year of running the dairy alone, when friends tried to convince her to move on and resume her architecture career, Audrey dug in her heels.

“Architecture doesn’t require any capital,” she says. “I can return to it tomorrow if I want. Craig and I invested a lot in this, and if I stop, I can never get started up again. Besides, I have all these animals to think about.”

To help keep the ranch afloat, Audrey hosts public tours on Saturdays during warm-weather months. Guests see the dairy and creamery, listen to Audrey tell the story of Ramini Ranch and taste fresh mozzarella. On the most popular part of the tour, guests join the calves for a two-way love fest. Armed with brushes, adults and kids give the baby buffs a large dose of the affection they seem to crave; scrubbing itchy heads, scratching under chins and behind ears, and reaping the reward of vigorous licks from large purple tongues.

In addition to the Saturday tours, Ramini Ranch hosts school visits. Students and groups of teachers come to see the animals and learn about milking and cheesemaking. Student volunteers from the University of California, Davis, come regularly to learn and, in exchange, to help out at the dairy.

“I give them information, and then they usually do something nice for me,” Audrey says, waving toward the breezeway area separating the dairy barn from the creamery that the last group painted.

The Culinary Institute of America, which has two Northern California campuses, is also on the schedule to visit.

“The school really wants student chefs to understand where food comes from, not just how to cook it,” Audrey says.

If the buffalo and their milk are the primary fuel of the dairy, Audrey is the engine. Now aided by two workers, UC Davis graduates Caleb Peretz and Vanessa Ramirez, who each work half the week on the farm, Audrey is looking at upping production.

“Three new moms on the milk line would bring milk production up to 230 pounds a day,” she says.

She plans a gradual increase from milking five days a week up to seven and making cheese three times a week instead of her current two. Besides the mozzarella, Ramini Ranch offers a limited amount of ricotta cheese and is having trouble keeping up with the demand.

“It has exploded,” Audrey says. “The chefs love it.”

One such chef is Joshua Schwartz, executive chef at Napa’s Del Dotto Vineyards.

“Audrey really pays attention to every batch of cheese,” he says. “She makes it all by hand; she is not relying on machines or other people to do it. That is what differentiates her from the other people making similar cheese. “She’s keeping it grassroots. I want that personal touch. Audrey delivers cheese to my house, my kids know her by first name, she’s part of my family. That’s the kind of relationship I like to have with purveyors. The owner of the winery always says it’s about the story behind the product, and Audrey has such a great story. She’s become part of our culture.”

A great story doesn’t mean much unless the product can back it up, and the quality of Ramini cheese speaks for itself.

“That cheese has a real sweet grassiness that cow’s milk doesn’t have,” Schwartz says. “It’s unbelievable with tomatoes in a caprese salad. It melts beautifully on pizza, and the ricotta makes amazing pasta dishes.”

As demand for Ramini’s trademark mozzarella increases, Audrey is looking into ways to diversify, sourcing butter-making equipment and researching the possibility of introducing yogurt, gelato and creme fraiche, and developing a burrata (a version of mozzarella filled with a creamy center). She hopes to get into local farmers markets and stores this year, making the cheese more available to the retail market. Most promotion so far has been by word of mouth.

“Really, I just talk to everybody I know,” she says. “If I have a connection, I try to get an introduction.”

In addition to her boundless energy and rock-solid commitment, running even a relatively small operation such as Ramini Mozzarella requires Audrey to have deep knowledge of complex equipment and systems, from cheese vats to automatic milking systems, refrigeration and sanitation techniques. Yet, there is one simple piece of equipment that she is never without, the key, perhaps, to her success. She digs into the pocket of her barn coat and pulls it out with a smile: her trusty buffalo brush.

This story originally appeared in the July/August issue of Hobby Farms magazine.