I discovered of a rusty old object on a rock pile, and it turns out to be a discarded automatic cattle water dispenser. It's rusty, but it still works. 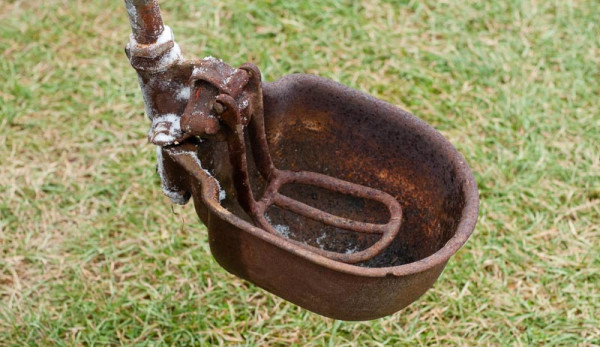 I recently walked through a lightly forested area of my farm to visit one of the large rock piles left behind from when the previous owners cleared the fields. This particular rock pile (there are many) is especially interesting because itâ€™s covered with rusty objects that were evidently no longer in use. Hence, their current location on top of an out-of-the-way rock pile, where they have remained in the open, free from the burying effects of grass and leaves for several decades.

Most items are big chunks of metal that were clearly part of machines at some point, but there is also some old wire fencing, lots of pipes and various smaller items I can’t identify. I guess you had to be there to know what they are.

But on this trip to the rock pile, one object caught my attention. In essence, it was a rusty metal bowl attached to a pipe about 2 Â˝ feet long. Inside the bowl was a lever, or perhaps a pedal is a better description; when depressed, it opens a valve in the bowl that is connected to the pipe.

It turns out this item is a vintage automatic water dispenser for cattle. My property once was a dairy farm, and evidence of this history can still be seen today, with this water dispenser being a striking example. The design is remarkably simpleâ€”the metal pipe would have been connected to a water source, with the water held at bay by the valve in the bowl. However, when the pedal in the bowl was depressed by the nose of a thirsty cow, the bowl would have filled with water by itself, ensuring that the cattle always had access to water.

Itâ€™s hard to say exactly when this water dispenser was retired from duty and banished to the rock pile, but itâ€™s my understanding that some 40 years have passed since cattle roamed this farm, so thereâ€™s a good chance that this water dispenser has been out there for at least that long. Certainly the amount of rust on the unit indicates that it has been out in the weather for a long time; the fittings for the various nuts and bolts holding the water dispenser together have rusted away substantially, leaving it quite loose and floppy, and let me assure you that I would never want to drink any water flowing through that pipe.

But finding this water dispenser has sparked my curiosity to do some research and find out when it might have been made. Despite its age and extensive rust, it was obviously a quality product at one time. Case in pointâ€”after I brought it back to my yard, a rainstorm rolled through and promptly filled up the bowl with water. It might be old, but 40 years after it was last used, the bowl still holds water.