Use A Water Garden To Grow Hydroponic Chicken Treats

You can build your own water garden, complete with goldfish, captured rainwater and hyacinths that can serve as hydroponic chicken treats. 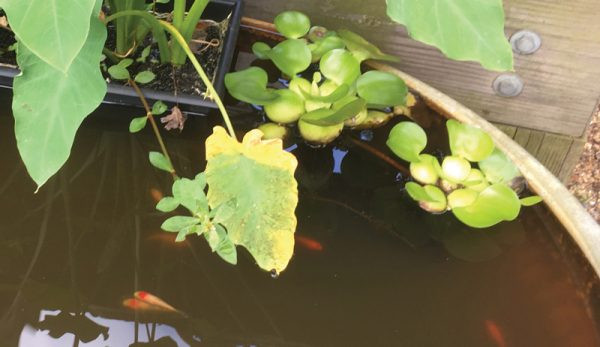 One fall, I was scooping up the floating hyacinth plants from a water garden. I had to get them out before the frost turned them into mush. They were bound for the compost bins behind the chicken coop.

On a whim, I tossed a few into the chicken run and inadvertently started a feeding frenzy! Without thinking about it, I had turned goldfish poop into hydroponic chicken feed.

Articles about hydroponics are sprouting up everywhere you look. Growing edible plants in water is promoted as being ŌĆ£easy.ŌĆØ But IŌĆÖm pretty lazy, so I hadnŌĆÖt jumped on that trend yet.

I do have a water garden. And I do grow plants in it. And I do have chickens that I need to feed. Suddenly, I realized IŌĆÖd stumbled into accidental hydroponics!

Growing strange plants is one of the best things about having a water garden. And some of them float, such as the water hyacinth, which is also known as blue shellflower. It grows as a spreading raft of balloon-like stems and curved leaves topped by 8-inch spikes of lavender blue flowers in summer.

But theyŌĆÖre tropical perennials. They die when frost comes north of zone 9, the southernmost tier of states. If you leave all that dead foliage in the water garden, you can wind up with too much decomposing organic matter, too.

ItŌĆÖs better to scoop out live hyacinth than dead fish (although chickens will happily eat those, too!).

Water hyacinths (Eichhornia crassipes) are from the Amazon, and in the U.S., they should never be introduced to natural streams or lakes as they will overwhelm other species, which is the definition of an invasive plant.

Only deploy them in residential water gardens in a way that they can never enter a stream or lake.

In other words, putting some in a farm pond that overflows into a waterway would be a very bad idea. States in which they would survive the winterŌĆözone 9ŌĆöoften forbid shipping them in-state and may fine people for possession.

Can you fall off a log? Then you can grow water hyacinth.

Like other plants, it needs water, sunlight (plant food) and nutrients (vitamins). If you have a water garden, or plan to start one, then tossing some hyacinths onto the surface will take care of watering.

The stems grow into hollow bubblesŌĆölike pontoonsŌĆöso they wonŌĆÖt sink. If there are fish in the water garden, their daily poops will provide the nutrients needed.

And as long as your water garden gets at least a half-day of full sun, your hyacinths will grow and multiply.

If your state doesnŌĆÖt prohibit shipping or possession of hyacinths, you can order them from places such as www.thepondguy.com. Your local garden-supply center may also have them come late spring.

If you find a network of serious water gardeners in your area, you may find someone who keeps them growing indoors over the winter and will share or sell some to you.

Prices range from $4 to $8 apiece depending on size, season, quantity and the market.

It shouldnŌĆÖt have been a surprise that the chickens like to eat water hyacinth. In Thailand, people eat the leaves and stems.

I havenŌĆÖt tried that yet. If you do, let me know what you think (perhaps in a soup?).

One of the reasons that water hyacinth has become a problem in tropical regions is because farmers put it in their ponds to turn excess nutrients into a food source for cattle. But on the other hand, itŌĆÖs toxic for dogs, cats and horses. So donŌĆÖt get too ambitious.

Even if you didnŌĆÖt feed it to your chickens, water hyacinths have benefits to the water garden.

Because they multiply and cover the surface, their shade suppresses algae (the bane of every water gardener). And their thick curtains of roots draped underneath the plant absorb excess nitrogen and phosphorus that would also feed algae.

Other creatures benefit from hyacinth. Frogs land on the leaves, and their tadpoles can hide in the roots while theyŌĆÖre small. Goldfish are hardy (at least where I live in zone 7 in North Carolina) and nibble on the roots when theyŌĆÖre not exterminating mosquito larvae.

Build a container water garden for your patio!

Lots of homesteaders keep vegetables alive over winter in a root cellar. So maybe for hyacinth we need a float cellar, otherwise known as an aquarium.

At some point in my life I stopped keeping tropical fish. But I did find a 10-gallon aquarium in the attic and filled it with about 9 gallons of water and some companions for the last hyacinth of summer: a lighthouse, a villa and a killer whale.

It sits in front of large windows that get all-afternoon sun among my potted dwarf citrus treesŌĆömore refugees from these harsh North Carolina winters. Once the springtime night temperatures stay above 50 degrees, the plant will be repatriated to the water garden and the aquarium back to the attic.

Because itŌĆÖs temporary, I havenŌĆÖt added a light, fish or a bubbler. For nutrients, I just give the hyacinth the same mist of weak fertilizer that the orchids and air plants get.

If you donŌĆÖt have a big sunny window, supplement by either leaving lights on during the day or mounting an aquarium light. Adding a killer whale is optional.

When other gardeners started installing rain barrels made from 55-gallon, plastic pickle barrels, I wanted in on the fun, too. But I wanted something that would be bigger, better looking and functional year-round.

At our local feed-supply store, I found what I was looking for: a 300-gallon galvanized horse trough. (Your local garden center may be able to special order and deliver them. They come in different shapes and sizes.)

With a downspout diverter, I was able to pipe rainwater into the trough. (If the tubing is level, excess water will flow back into the downspout.) Because the trough came with a threaded opening near the bottom, I was able to add a brass spigot and a soaker hose to water the nearby vegetable garden.

This trough does more than store water for summer irrigation. I can keep goldfish and grow aquatic plants.

That was about 15 years ago. I have two of these at my house and have installed several for clients. HereŌĆÖs what to do if you want one.

The galvanized coating will protect the steel from rusting but not if it touches the soil where organic acids will oxidize it. If you canŌĆÖt install it on a patio, raise the trough off the ground on pressure-treated 6-by-6s or bricks or cinder blocks and make sure itŌĆÖs close to level.

If it overflows, you want the water to flow away from the house.

Plant water lilies (Nymphaea sp.) or lotus plants (Nelumbo sp.) in a plastic tote, and cover their soil with gravel. (Do this after you set the tub in the trough.) That way when you draw down the water during a drought, there will still be water in the tubs for the aquatic plants.

If you have floating plants and goldfish (recommended), then turn off the irrigation while thereŌĆÖs still about 6 inches of water in the trough, to hold them until the next rain. In practice, I mostly use these water gardens as a quick way to fill watering cans to irrigate our considerable number of container plants.

Plunging the watering cans fills them more quickly than the hose will. And the extra nutrients floating around make for a mild shot of fertilizer for the potted plants.

The trough will be too deep for marginal aquatic plants such as cardinal flower, hibiscus and Iris siberica. So scavenge or buy those window boxes with hardware that lets them hang over a deck rail. Plant the boxes with marginal plants, and hang them over the inside of the trough.

The drain holes will allow the potting media to draw up moisture when the water garden/rain barrel is full. And these plants are adapted to the occasional drought when you drain the tank for irrigation.

Of course, you donŌĆÖt want your new water garden/rain barrel to populate your yard with mosquitoes, so you can add Mosquito Dunks once a month. They have bacteria that only harm mosquitoes.

If you wait until algae have started growing on the inside of the trough, stock the trough with goldfish from a pet-supply store.

You wonŌĆÖt need to feed them. DonŌĆÖt buy the expensive ones as they arenŌĆÖt tough and may get eaten by herons anyway.

In spring, buy what are called ŌĆ£feeder fish.ŌĆØ These are the tough, inexpensive goldfish that can survive less than ideal conditions.

Start with three or more. They will likely multiply. In zone 7, mine go dormant in winter at the bottom of the trough and reappear every April when it warms up.

First: In spring we hear songs of four different species of tree frogs coming to lay their eggs.

Second: The afternoon sunlight bounces off the surface of the water up through our living room window and shimmers on the ceiling as youŌĆÖve probably seen sunlight do under a bridge. Can your rain barrel do that?

This article originally appeared in the March/April 2020 issue of┬ĀChickens┬Āmagazine.