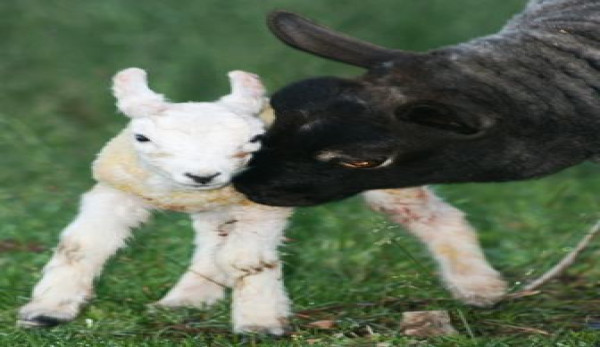 An awful thing happened on our farm yesterday afternoon.

Our mama sheep, Baatiste, died from heat stroke. Her baby lamb, Sam, is so sad and so is our Mom. Sheās also really mad at herself for letting Baatiste get so fat. Fat animals are lots more prone to heat stress than fit guys like me. Uzzi had better watch out!

Today is Midsummer. Midsummer is the first day of summer, or at least thatās what the calendar says. But itās 102 degrees with a heat index of 112 today and itās been hot for two weeks already!

Our sheep had their haircuts this year and they have shade and lots of cool water to drink. They lie around in the afternoon, panting, and usually theyāre okay. But yesterday afternoon Baatiste started panting really hard with her tongue sticking out.

When Mom saw that, she brought a fan out for Baatiste and tied it to the fence in the shade and she brought Baatiste her own big bucket of cool water too. But Baatiste didnāt get better. Instead, she started to bloat. Baatiste began staggering and Mom ran in to make a bloat remedy for her.

When it was almost done, Dad came in and told her Baatiste was gone.

So, donāt let your animals get fat. And if theyāre already fat, make especially sure they have what they need to survive really hot weather.

If they are dogs or other animals that live in the house, keep them indoors where itās air conditioned. If theyāre outside animals like me and Uzzi, make sure they have lots of shade and plenty of cool water all day and try to set up a fan to keep them cool.

There are lots of places on the Internet where you can read about preventing heat stroke in pets and farm animals. Donāt take a chance, check them out. Then you wonāt have to be sad like my mom and Sam.