Yesterday, Steve the dog was trotting over to visit us when a big black wasp flew out of nowhere and stung Steve right on the butt. 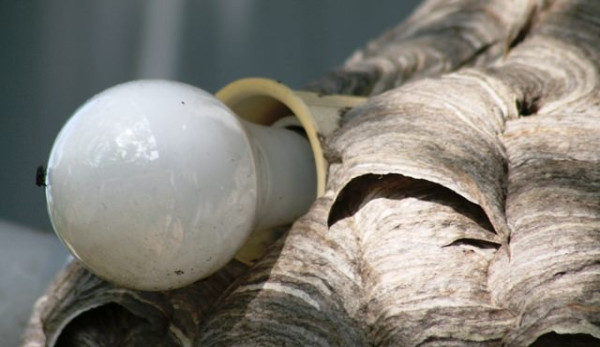 Yesterday, Steve the dog was trotting over to visit us when a big black wasp flew out of nowhere and stung Steve right on the butt.

Steve yiked and dove under the deck (Steve is a Rottweiler-Chow but not a very tough one). Our wasps are very aggressive this year.

Uzzi and I decided to Google wasps and see if we could find something to help poor Steve (heâ€™s afraid to come and visit us now). This is what we learned:

There are more than 4,000 kinds of wasps in the United States.Â  Some kinds are also called hornets and yellow jackets. Theyâ€™re aggressive from August through October, though they only come out during the day. Only females sting because a femaleâ€™s stinger (called an ovipositor) is her sex organ.

We looked at pictures and discovered that the wasp that stung Steve is a Bald-faced Hornet. It was black with splashes of white on its face.

Bald-faced Hornets live all over the United States, so you may have them on your farm, too. Be careful! Theyâ€™re very aggressive and attack anything that invades their space.

And, they have smooth stingers, so they can sting over and over until they want to stop (Ow!). Hornet stings carry venom that makes the stings hurt, itch and swell for about 24 hours.

A neat thing, though, is that they build cool nests out of papery stuff made of wood pulp that they soften by chewing and then mix with spit.
Â
A few days ago, Mom and Dad were driving down a back road when they spied this â€¦ thing â€¦ up high on an abandoned house. It looked like a papery gray mask! They stopped and took these pictures. Itâ€™s a hornet nest built around a two-light bulb outdoor lighting fixture. Pretty neat, huh!