Remember back in June when I told you I was Feeling Frisky? 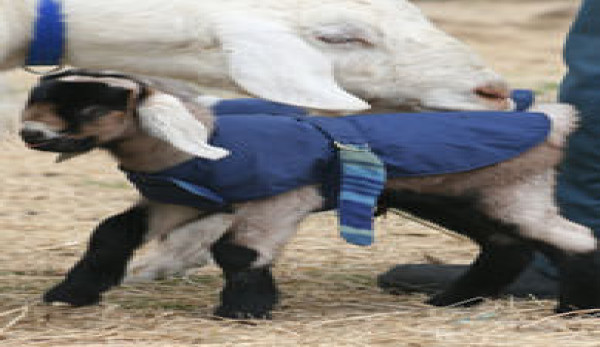 Remember back in June when I told you I was Feeling Frisky?

That’s when I wanted to breed Big Mama and Mom said I couldn’t. That wasn’t fair! Big Mama is really old but she’s beautiful; husky and strong, with long white pantaloons and a beard (you’ve gotta love a woman with a beard). Big Mama and I wanted to make kids.

So on October 14 (Mom wrote it on the calendar just in case), Mom was working at her computer when she glanced out the window at my pen. Big Mama was backed up to the fence and I was standing on my hind legs with my front legs through two openings, having fun.

She leapt up, raced out and took Big Mama away. She thought, “They couldn’t have done it—could they?” But we did!

Two months ago, Big Mama started getting bigger. And bigger and bigger and bigger. Mom was worried because Big Mama isn’t supposed to have more kids; she got sick after her last kids were born and two of her triplets died. So Mom has been pampering Big Mama, feeding her extra minerals, homeopathic remedies and lots of yummy food like black sunflower seeds, goat pellets and alfalfa hay. And, she’s been checking on Big Mama every few hours around the clock (Mom hasn’t been getting much sleep).

Today Big Mama had twins! They are so cute and they’re my prettiest babies so far. Mom named them Simka and Latka after characters on Taxi, one of Dad’s favorite vintage TV shows. Mom is going to keep them. Yay!

And you know what? All that pampering paid off. Big Mama gave birth without a hitch. She’s happy, healthy and proud of our through-the-fence boy and girl.

Now Bon Bon is getting ready to have our kids. I heard Mom telling Dad that Bon Bon was acting squirrelly today, racing around with her belly bouncing, her udder flopping from side to side and her ears stuck out like The Flying Nun (Uzzi and I don’t know who that is but when Mom told Dad, he laughed).

That’s out-of-character for Bon Bon; does often act weird before they kid. She’s due this Friday but Mom doesn’t think she’ll wait that long. Maybe I can show you more baby pictures next week!