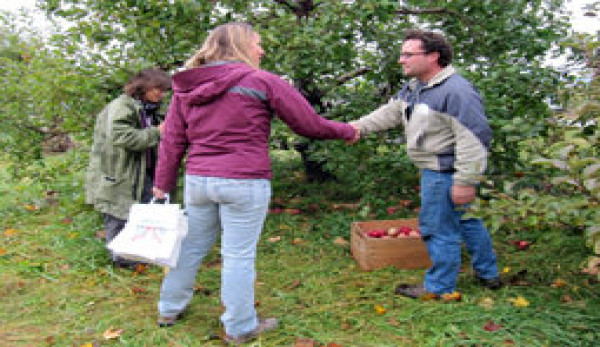 As any hobby farmer knows, a farmerâ€™s work is never done. So forget making time to squeeze in a social life. For young, single farmers or those new to the area, meeting new people can be problematic.

Wendy Palthey of Tunbridge Hill Farm in Tunbridge, Vt., and two of her 25-year-old farm workersâ€”one single and one new to townâ€”pondered this dilemma as they worked together to weed some of the farmâ€™s fields.

â€śWe were all trying to figure out who we knew in the area who was of similar interests,â€ť she says. â€śNo one. So we started to joke about how you really got to know someone after weeding a bed with themâ€”all sorts of conversations flow naturally.â€ť

Thatâ€™s when the idea for weed dating, the on-farm version of speed-dating, was born.

After Palthey flippantly shared the idea with Jean Hamilton from Vermontâ€™s chapter of the Northeast Organic Farming Association, the joke soon became a reality. The organization hosted the first of four weed-dating events in the pilot program at none other than Tunbridge Hill Farm.

Weed dating unfolds pretty much how you would imagine. Weeders are paired up along farm rows, the timer is set for five to seven minutes, and the pair dives into conversation. Once the buzzer sounds, the weeders switch partners. Pretty soon, the farmâ€™s rows are weed-free and everyone is familiar with one another.

â€śSome folks are a lot more comfortable and themselves when they are working as opposed to dancing or sitting around, wondering what to say to someone,â€ť says Palthey. â€śJust the fact that someone shows up at one of these events shows that they are doers, not just talkers or posers.â€ť

As an added bonus, she points out, choosing attire for the event is easyâ€”you know you are going to get dirty.

Is Weed Dating Really Dating?
While weed dating could potentially be the new dating service for rural folks, NOFA Vermont, an organization that focuses on building community around local agriculture, wanted to make it an event anyone could attend.

â€śWe talked a lot about how romance-oriented we wanted it to be and whether to hold events for different demographics,â€ť Hamilton says. â€śWe decided to have an event that focused on community-building instead.â€ť

Four weed-dating events were held in 2010 at various farms as part of the programâ€™s pilot year. A variety of participants of all ages showed up, from farmers to people with other careers. In addition to meeting like-minded folks, the weed-daters had the opportunity to take farm tours to learn about the areaâ€™s agriculture.

In general, the atmosphere was fun and casual, she says, though not particularly strategic in regards to matchmaking.

The Future of Weed Dating
NOFA Vermont is still reviewing the first year of its weed-dating program. While the events were successful in many ways, says Hamilton, the concept doesnâ€™t necessarily fall in line with NOFAâ€™s mission. For the future, itâ€™s considering partnering with an organization that specializes in matchmaking.

However, the concept seems to be catching on elsewhere. Students at Central Carolina Community College in Pittsboro, N.C., contacted Palthey about how they can start a weed-dating program on their campus.