Plenty of gardeners use weed suppression fabric, but these alternative weed control methods are more beneficial to your soil, plants and the environment. 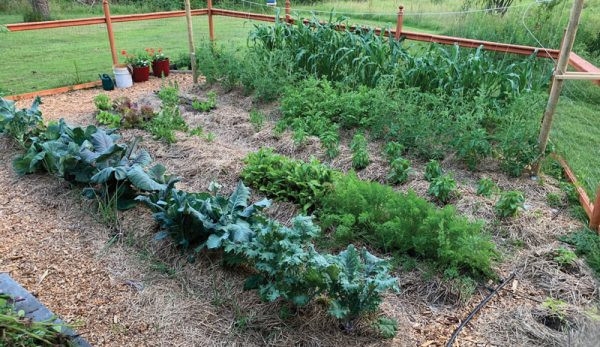 Whether they‚Äôre establishing new perennial beds or planting row crops, plenty of gardeners have come to rely on rolls of specially manufactured weed barrier fabric to minimize the need for weed pulling and to keep the garden looking tidy.

Typically woven from polypropylene, some of these products contain recycled content. And they certainly are convenient.

However, in the long run, they‚Äôre not doing the soil much good. Fortunately, there are many other ways to manage the weeds. These ways not only improve soil quality but also keep harmful greenhouse gases on lockdown.

‚ÄúWeed barrier isn‚Äôt cheap. It can actually add up quite quickly,‚ÄĚ says Acadia Tucker, a climate activist and the author of Growing Good Food: A Citizen‚Äôs Guide to Backyard Carbon Farming. She also operates a 10-acre farm and swears by good old-fashioned cardboard.¬†

‚ÄúThe reason I like cardboard so much is because it does decompose. And it actually feeds the soil organisms, which help to increase the carbon content and sequestration ability of the soil,‚ÄĚ she says. ‚ÄúIt‚Äôs also free!‚ÄĚ

She hits up supermarkets and hardware stores for the resource. ‚ÄúI get cardboard that isn‚Äôt glossy and that doesn‚Äôt have any labels or tape on it,‚ÄĚ she says. ‚ÄúOftentimes, they invite you to take as much cardboard as you need, because they have to pay to dispose of it. I use that to my advantage.‚ÄĚ

Most landscaping fabric allows some moisture‚ÄĒbut little oxygen or light‚ÄĒto penetrate it. It‚Äôs also designed to remain intact for multiple seasons. Cardboard, on the other hand, gradually breaks down and doesn‚Äôt inhibit microbial activity.¬†

¬†‚ÄúThe key thing for me is the addition of organic matter‚ÄĒwhatever that organic matter is,‚ÄĚ Tucker says. When she‚Äôs not using cardboard to keep weeds down, she relies on an extra-thick layer of mulch to block sunlight. She also applies compost at least twice per year.

Tavis Lynch also sees utility in cardboard‚ÄĒonly he‚Äôs taken his weed suppression game to the next level. The field mycologist and author of Mushroom Cultivation: An Illustrated Guide to Growing Your Own Mushrooms at Home pairs cardboard, mushroom spawn and wood chips or straw to grow wine caps.

‚ÄúI prefer to use cardboard that doesn‚Äôt have a lot of ink on it, because some of that may not get broken down by the enzymes present in the Stropharia mushroom,‚ÄĚ he says.

The edible mushroom, Stropharia rugosoannulata, has an asparagus-like taste and texture. At 30-percent soluble protein by weight, it‚Äôs also a respectable meat substitute.

Read more: Did you know you can grow mushrooms on compost? Here’s how to get started.

Lynch usually introduces wine cap mushroom spawn in the spring within his perennial flowerbeds. To start, he cuts out sections of the cardboard to permit his established perennials to pass through.¬†

‚ÄúThe cardboard is blocking all sunlight from the ground. And then I just loosely cover it with [spawn-inoculated] wood chips or straw,‚ÄĚ he says. ‚ÄúAll the weeds are being completely killed underneath that. But at the same time, the cardboard is being broken down.‚ÄĚ

He keeps the mushroom spawn moist through the spring and summer and then? ‚ÄúThe weeds aren‚Äôt going to start growing in the fall. But your mushrooms will, and your cardboard is gone,‚ÄĚ Lynch says.

Weed suppression aside, wine caps are also handy for garden cleanup. ‚ÄúIf you have old straw that you want to clean up, I have seen a small bag of wine cap mushroom spawn turn a 50-square-foot-by-1-foot-thick heap of straw into 1‚ĀĄ8 inches of usable, black dirt in one season,‚ÄĚ he recalls. ‚ÄúAnd all they had to do was keep it wet.‚ÄĚ

Of course, there are even greener weed suppression methods available. Planting sections of the garden in traditional cover crops can be a great way to outcompete weeds, boost soil fertility and improve soil structure. Leguminous cover crops such as field peas, crimson clover and hairy vetch naturally boost soil nutrients by taking nitrogen from the air and fixing it in their roots.

Once the plants die back, their roots eventually make that extra nitrogen available in the soil. Cover crops also aerate the soil and support myriad beneficial bacteria, fungi and other deep soil dwellers.¬†

According to Ashley Louise Miller Helm¬≠holdt, soil that is planted with cover crops ‚Äúhas an increase in slow-release nutrient reserves, and it can hold more water.‚ÄĚ Miller Helmholdt serves as adult program leader for the Cornell Garden-based Learning Program, Cornell Cooperative Extension.

In fact, that ability to retain moisture can even help to protect area watersheds.¬†

‚ÄúLarge precipitation events leach fertilizers and nutrients from our soils. These run into our storm drains, go down to our local bodies of water and contribute to things like harmful algal blooms,‚ÄĚ Miller Helmholdt says. ‚Äú[Overwintering cover crops] take up nutrients at the end of the growing season that would otherwise be lost to leaching.‚ÄĚ

The Trouble with Tilling

Still, when it comes to cover crops, Tucker has one caveat. ‚ÄúOne of the ways people deal with cover crops is they just rototill them into the soil. But if you‚Äôre going to have to rely on a rototiller, you‚Äôre kind of taking one step forward and two steps back,‚ÄĚ she says. ‚ÄúWe want to focus on a no-till or reduced-till frame of mind.‚ÄĚ

Tilling spent cover crops into the soil disrupts its root zone and the beneficial ecosystem flourishing within it. ‚ÄúWhen the plant does die and the roots are left in the ground, that injects organic matter into the soil deeper than if you were to just top-dress it with compost. So it helps to sustain the natural cycle of things,‚ÄĚ Tucker says.

‚ÄúSome cover crops, if you cut them or mow them enough, they‚Äôll kind of run out of energy. That‚Äôs a way to keep the tillage to a minimum,‚ÄĚ she adds. For small areas, regular, aggressive trims with a weed wacker can be sufficient to keep cover crops from setting seed.

Read more: Organic no-till growing is good for you and your land.

Beyond the Usual Suspects

Actually, as long as the soil is adequately covered, nearly any kind of plant can help with weed suppression. ‚ÄúYou can plant different things at different times in order for there never to be bare soil,‚ÄĚ Miller Helmholdt says.¬†

Just why shouldn‚Äôt soil be bare? ‚ÄúHaving plant roots holding soil in place will help prevent that really rich topsoil that you work so hard to build from getting washed away with heavy rains or blown away by the wind,‚ÄĚ Tucker says.

‚ÄúAnd, as soon as that soil is washed away, all of that carbon is exposed to the air. It just becomes CO2 again.‚ÄĚ

‚ÄúIn the realm of home gardening, there needs to be more experimentation,‚ÄĚ Tucker says. That could mean planting loads of radishes, kale or even dwarf marigolds between crop rows and in other weedy spots. For her part, Miller Helmholdt sometimes controls weeds and protects her garden soil with succession plantings of lettuce.¬†

‚ÄúIf you‚Äôve got that spare patch of soil, plant a bunch of annual cutting flowers that year. Then next year it‚Äôll be ready for your lettuce or something like that,‚ÄĚ Tucker says. ‚ÄúTry to tie function in with the cover crop.‚ÄĚ

‚ÄúYou also can underseed,‚ÄĚ Miller Helmholdt says. In other words, rather than wait to remove a spent crop before planting your subsequent weed suppression material of choice, direct-sow seeds all around the old crops.

“[The new seedlings] will provide that slow-growing green mulch underneath your ‚Ä¶ crops until you are ready to take them out.‚ÄĚ

Provided they aren‚Äôt noxious, invasive or crowding out cultivated plants, it also can‚Äôt hurt to leave some weeds well enough alone. Particularly, look for those that flower in very early spring or late fall, since they offer pollinators much-needed sources of nectar and pollen when there‚Äôs little else to be had.¬†

‚ÄúYou can kind of select for the weeds that you find useful, too,‚ÄĚ Tucker says. ‚ÄúIt‚Äôs hard to find the value in, say, a California thistle. But then you have purslane, which is a common weed all over the place. And it‚Äôs edible.

“Once you find a good use for weeds, then you start to look at them as if they were any other kind of vegetable in your garden. And, if you can prevent your weeds from going to seed, then having them as a green mulch really isn‚Äôt a problem.‚ÄĚ ¬†