Weed Wars: Down With the Cocklebur!

When one weed wants to take over the garden, and that weed (the cocklebur) has an arsenal of crafty tactics built into its very nature, it's time to take action. 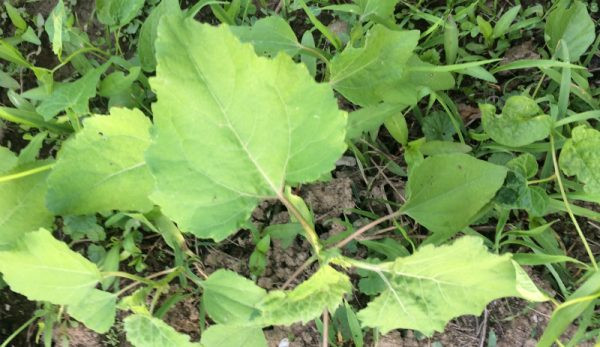 If thereâ€™s one weed that will get the best of me this year, itâ€™s the cocklebur. Common cocklebur (Xanthium strumarium) is making its way through the garden with reckless abandon. It grows in our meadow. It grows in our garden aisles. And worst of all, it grows between my newly planted tomatoes.

I should have expected this hardy annual to take over about now. For two consecutive years, weâ€™ve let the garden become overgrown with whatever green thing wants to take up residence. Couple that with a lot of rain this year, satisfying that darn weedâ€™s love of wet feet, and, well, you’ve established the grounds for a cocklebur mutiny.

I was introduced to cocklebur during our first winter on the farm, as Mr. B and I cleaned out the garden plots that had never properly been put to bed the season before. Masses of dried teasel, ironweed, goldenrod and, yes, cocklebur had entangled themselves around rusty trellises, and it was our job on that chilly January afternoon to create a zone that would provide something of a blank slate the following spring. That evening, I remember coming back to the house and picking the cocklebursâ€™ seed heads off of my Carharttsâ€”a chore almost worse than cleaning up the garden itself. Those plants sure do have a sneaky way of spreading themselves all over the place!

In fact, theyâ€™re so efficient at gaining ground in our garden that Iâ€™ve added a fourth goal to this yearâ€™s growing-season agenda: Do not let the cocklebur go to seed!

The seed heads of the cocklebur look much like what you would think the seed head of a plant named cocklebur would look like: bean-sized burrs with sharp points perfectly suited to grab onto clothing and fur to hitch a ride to the spot of soil it wants to call home. Inside each burr are two seeds: one that germinates the first year itâ€™s planted and one that hunkers down for another year when the conditions are right.

When the cocklebur is just a seedling, it contains a toxin that prevents its seed companion and competing weeds from germinating around it, giving it a nice monopoly over the earth. (This toxin also causes fatal hypoglycemia in livestock, so beware if it grows in your pastures.) As I considered this, I thought maybe I could use it to my advantage.

You see, this week, on the last sunny day before a string of wet weather, I spent four straight hours in the garden weeding. I shuffle hoed. I chopping hoed. And then I got down on my hands and knees to pluck those little buggers out from around plants and from among a living mulch I was waiting on to mature. (Did you know that your hands could get sore from plucking out baby weeds for hours? You bet they can.)

But what if I didnâ€™t have to get down on my hands and knees to pluck cockleburs anymore? What if I could use the plant’s own toxicity against it, to prevent other cockleburs from emerging? Hereâ€™s the experiment I want to try: Pick the baby cocklebursâ€”hopefully for the last timeâ€”and brew them into a nice, strong cocklebur tea, and then spray that tea all over the garden where cocklebur seedlings want to spring up. I hope the toxin in the cocklebur tea prevents the growth of future cocklebur seedlings, and we can spend our time on more important things, like fencing and irrigation setup.

So thatâ€™s whatâ€™s on my agenda for the week ahead: cocklebur warfare. And I hope we can say goodbye to those crazy little burrs for good.