Don't let weeding get the best of you this year. New strategies you can add to your arsenal include row orientation, living mulch and abrasive weeding. 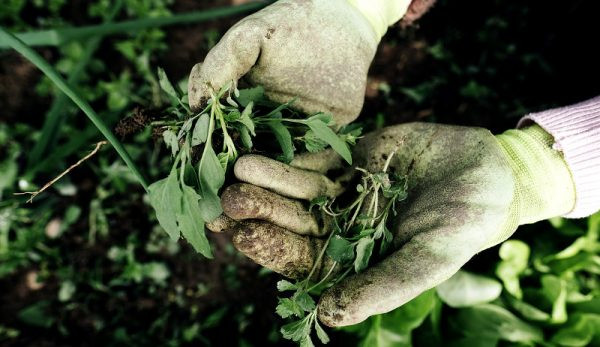 Itâ€™s the time of year again when all that was brown turns green. When green things grow in your garden, you can bet that unwanted weeds are close behind. When it comes to weeds, thereâ€™s no single right way to eradicate them. Instead, I like to think of weeding techniques as tools in a toolbox, ready to be used when the time is right.

Just like every toolbox has a hammer and a wrench, you probably have weeding strategies such as hand-pulling, hoeing and mulching. When it comes time for real craftsmanship, though, you need to reach for those specialty tools. Here weâ€™ll discuss some of those weeding â€śspecialty toolsâ€ť you can call on this year.

You often need to think about your weed management plan before you even plant your garden because the arrangement and spacing of your plants can often help minimize weed pressure. One thing to consider as you begin preparing your plot for the year is the orientation of your crop rows.

Conventional wisdom guides gardeners to plant their rows north to south for maximum sun exposure. However a study in Australia found that rows situated at a right angle to sunlight directionâ€”which is to say, east to westâ€”prevented light penetration to weed seedlings, reducing weed pressure by 51 percent in wheat crops and 37 percent in barley crops while increasing grain yield by 24 percent and 26 percent, respectively. Of course, the effectiveness of the row orientation is determined by latitude and time of year, though researchers found the differences were minor.

Altering the density and pattern of your planting can also affect weed pressure. Studies in Denmark and Colombia have shown that tighter planting significantly reduces weed pressureâ€”as much as 72 percentâ€”while simultaneously increasing yields. However, be aware that too dense of a planting might decrease yield as crops compete for resources. A grid pattern vs. the conventional row pattern seemed to best suppress weed pressure.

A living mulch makes use of the high-density planting concept to provide soil coverage in areas where you might otherwise lay plastic or straw. Think of it as a cover crop but for the growing season. Perennial plants, such as clover, buckwheat, hairy vetch or rye, are planted between crop rows, then are mowed, tilled or rolled periodically to prevent seed from spreading.

While living mulches are often used to provide nutrients and organic matter to the soil, their weed suppressing benefits cannot be overlooked. A dense carpet of these plants in essence smothers out the weeds by competing with them for water, nutrients and light. A study in Georgia that used white clover between corn rows reduced the need for herbicide by 75 percent to 80 percent. For best results in your garden, use a combination of legumes and grasses.

Allelopathy makes use of crops that release allelochemicals that, in combination with soil microbes, kill off certain plants. The best-known allelopathic plant is the walnut tree. It releases the chemical juglone, which is toxic to many of the plants we like to grow in our gardens, such as tomatoes and other nightshades. The use of allelopathy as a weed suppression technique is controversial because scientists have a difficult time determining how much of the weed suppression effect comes from the allelopathic chemical the plant releases or the physical interference of the plant itself.

Some common allelopathic crops include rye, sorghum, sunflower, clover, vetch, rape seed and wheat. Farmers can use these cropsâ€™ allelopathic properties through planting them as a living mulch or as a cover crop. The allelopathic compounds can also be isolated and applied as an herbicide. Be aware that certain allelopathic plants could hinder germination of your direct-seeded crops, though established crops and transplants are less likely to be affected.

An emerging weeding technology, abrasive weeding makes use of small grits propelled by compressed air to injure or kill weeds, particularly broad-leafed weeds. Research has shown that abrasive weeding might be safer, use less energy and be less damaging to your crops than flame weeding, and in two applications, you can reduce weed pressure by 50 percent to 90 percent. The bad news is that you’ll probably have a hard time finding grit applicators on the market, but as promising as this technology seems to be, I hope it wonâ€™t be long before that changes. Read more about abrasive weeding here.