Learn To Read Your Weeds, Improve Your Farm & Garden

Pay attention to the signals unwanted plants are sending, and you might find these weeds are quite perfectly suited for their environment. 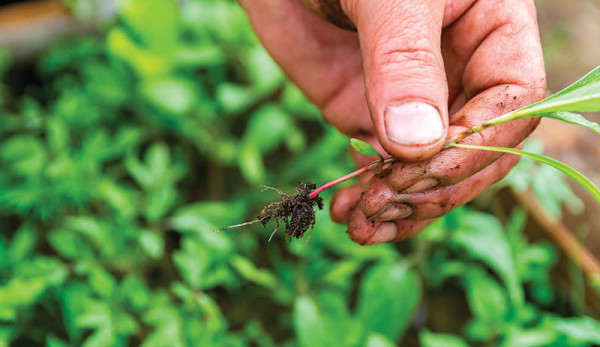 Weeds are unwanted and invasive. We call them aliens and bullies. We target them with mass eradication and chemical pesticides. But could it be possible that weeds are just misplaced and misunderstood? If we got to know them, and didn‚Äôt jump to conclusions, label them as harmful or waste energy trying to wipe them out, could we learn something about land stewardship from them? Let‚Äôs take a moment and do just that by asking a few basic questions. If we‚Äôre receptive enough, maybe they‚Äôll impart to us some of their valuable natural wisdom.

First things first: You need to identify your weeds. Get in touch with your local extension office for a regional guide to common weeds, and check the USDA‚Äôs website for each state‚Äôs list of noxious weeds. With a shift in perspective, this list could turn into a wild foods shopping list.

Read Katrina Blair‚Äôs The Wild Wisdom of Weeds: 13 Essential Plants for Human Survival (2014) and your idea of weeding will become harvesting for the abundance of free food and medicine that herbs can provide.

The 13 plants Blair chronicles are found growing in every region across the world: dandelion, mallow, purslane, plantain, thistle, amaranth, dock, mustard, grass, chickweed, clover, lamb‚Äôs quarter and knotweed. ‚ÄúThese special plants contribute to the regeneration of the earth while supporting the survival of our human species,‚Äù she writes. ‚ÄúThey grow everywhere where human civilization exists, from the hottest deserts to the Arctic Circle, following the path of human disturbance. Indeed, the more humans disturb the earth and put our food supply at risk, the more these 13 plants proliferate. It‚Äôs a survival plan for the ages.‚Äù

Learning the families and species of some of the most common weeds can help your recognition of these old enemies/new friends when you encounter them in the field.
The Compositae family, which includes species groups of thistles, sunflowers and ragweeds, have composite flowers, aka clusters of tiny flowers that resemble one large flower.

Grasses belong to the Graminaceae or Poaceae family, and are easily recognizable even as young sprouts. These are monocots, which means they have one cotyledon, aka seed leaf. If you see a single-leafed seedling starting to emerge among your vegetables‚Äîunless you have planted corn‚Äîyou‚Äôve probably got a little grass weed of some sort.

Mustards, including wild mustard and shepherd‚Äôs purse, belong to the Cruciferae family, the name referring to the arrangement of four petals in the shape of a cross. This family is also called Brassicaceae, where cabbage, broccoli, kale and cauliflower all belong.

Amaranthae includes a variety of pigweeds, not to mention quinoa, kale and amaranth, which was one of the first domesticated crops in North America, long before corn‚Äîa truly native American plant.

Where Are You From?

Simply understanding the country or region of origin can tell you a lot about what a plant needs for survival, and why it has taken up residence here. For example, take the tumbleweed, aka Russian thistle (Salsola kali).

Contrary to Hollywood‚Äôs depiction, the tumbleweed is not a native to the western U.S. The tumbleweed‚Äôs homeland is Russia, where the ingenious plant evolved on the windswept steppes. The breakaway design of the shrub‚Äôs stem is unique, and coordinates with perfect timing the release of seeds and roots. With a specialized layer of cells that mimic those in plants that drop their fruit and leaves, the tumbleweed‚Äôs stem separates cleanly from its root and the bush hits the road in the autumn. The seeds are dispersed as the plant rolls, yet they wait to germinate until the spring when they have the right amount of moisture.

Most invasive exotic plants were brought here as food or medicine, and looking at how these plants are used in their home countries provides clues to what they are useful for here as well.

What Do You Do?

Pioneer species are the first to recolonize an area of land that has been disturbed, and by anyone‚Äôs definition, modern farming is a disturbance on the land. The purpose of these pioneers is that, by being themselves, they literally do the groundwork for biodiversity to return.

Think of the qualities of a pioneering spirit and you’re likely describing the plants called noxious weeds: hardy, resilient, persistent, deeply rooted yet willing to travel, and adept at harmonizing with their new environments.

In an interview on Sustainable World Radio, teacher and founder of The Permaculture Academy in Los Angeles, Larry Santoyo describes thistle as an ally in protecting grassland from overgrazing.

‚ÄúThe thistles are designed to repel grazing animals,‚Äù he says. ‚ÄúIt‚Äôs nature‚Äôs way of saying enough. Enough grazing, it‚Äôs time now to heal. So, it sends up its thistles with its spiny leaves, no longer inviting the animals to feed on the lush green grass. Now it repels these grazers from tramping and compacting and with its long taproots, thistles mine the soil to bring up and replace the now needed nutrients. The long taproots penetrate deep to break up and loosen the hard soil compacted by too many animals. The thistle is telling us to stay away until the soil is rebuilt, until the earth is healed. It sets the stage for the disturbance to end, health to return and the next level of succession to begin.‚Äù

Thistles are prickly and foul-tasting, keeping grazers at bay while opening up the opportunity for a natural succession of woody plants, vines and fruiting trees to get established. Likewise, many weeds fill a gap and get to work repairing the soil in a variety of different ways.

Physically, they break up compacted soil with deep taproots: Leafy spurge‚Äôs root system reaches down 8 feet. Low-growing, lateral-¬≠creeping weeds, such as chickweed, can provide similar physical functions as any cultivated cover crop. They will shade the soil, protect it, retain moisture and shade out other plants.

Biologically, weeds add a huge supply of organic material‚Äîgreen mulch that is harvestable or compostable. They also provide habitat for insects living at the soil surface or deeper within the soil, which create a complex food web of invertebrates, bacteria and fungi. In the farm ecosystem, volunteer plants promote biodiversity where it is lacking, and a monoculture is a prime target for weeds to come in and mix things up a bit.

Chemically, they change the mineral content of the soil. For example, deeply rooted weeds, such as comfrey, accumulate minerals. They are, in essence, mining the valuable nutrients from deep within the earth and making them available to the plant community. Some of these accumulators will share minerals via the root systems or with the help of processing by worms and soil organisms, and others will release chemical compounds as they decompose. Imagine that some of the weeds growing in your garden right now will be providing exactly what the soil needs to sustain next year‚Äôs seeds.

Northern California farmer Bob Cannard explains his philosophy on farming with weeds in a video series called ‚ÄúOur Relationship with Weeds,‚Äù produced by Purdue University Extension. He says that half of what grows on his land is for people, and half is for nature. His crop of amaranth weeds will give the birds lots of seeds to eat, and they are part of the overall digestive system that is an integral part of his operation. ‚ÄúWeeds are No. 1,‚Äù he says. ‚ÄúVegetables are a secondary response to having good soil and a good digestive system.‚Äù

How Long Do You Plan To Stay? 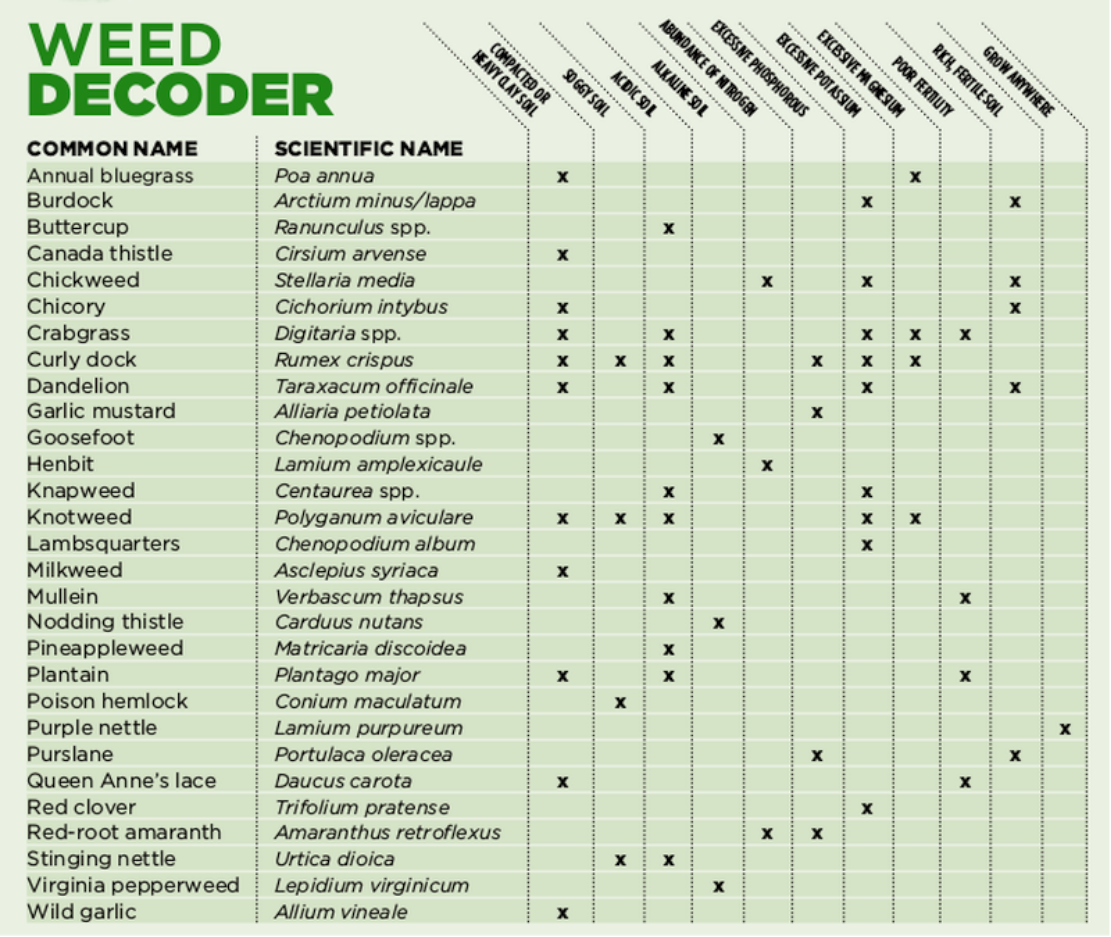 Cannard says the key to living harmoniously with weeds is timing. In a video from the same series, Johnson shares his point of view: ‚ÄúThe fundamental practice of dealing with weeds here is to understand them, to observe them, to see how they grow, when they grow, when they make seed, to understand their whole rhythm, their whole cycle,‚Äù he says. ‚ÄúThen, to intervene at that right moment when they produce the most biomass.‚Äù

Cannard prefers to let his weeds live a long, full life and then ‚Äúdie of contentment,‚Äù as he puts it. In the meantime, he strategically uses them to benefit his own food production, such as allowing buckwheat to protect his peppers from sunburn and shade his lettuce to keep it from bolting early.

Watching when the plants flower, anticipating when seeds will mature, understanding how the plants spread and sensing how much growth you are comfortable allowing is a matter of observant interaction with your farm or garden. The side benefit to being this closely involved with your land is the valuable information you‚Äôll gather, which will inform better decision-making for the entire system.