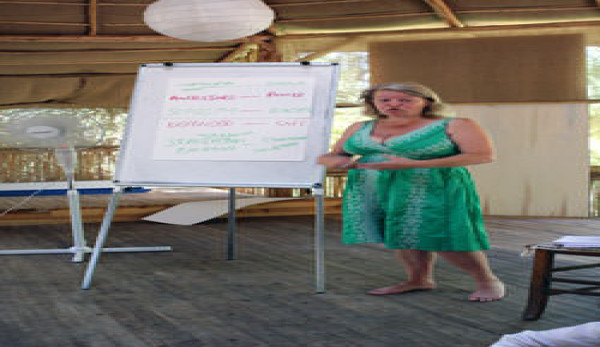 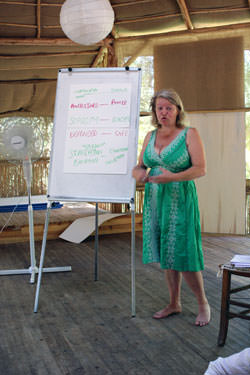 This week, Turkey joined the growing list of countries with communities signing up to become part of the Transition movement.Transition trainer Gerri Smyth came from Gilford, England, to lead the 21 participants from western Turkey, France, Germany, Luxembourg and the United States through a two-day seminar on how communities can respond to climate change by moving away from fossil fuels and building stronger, more resilient communities.

Smyth explained that the Transition Network philosophy stems from the idea of permaculture — a sustainable-living approach modeled after nature — which is appropriate, because the training session was held at Pastoral Vadi, a permaculture-based eco-resort near Fethiye, Turkey. Pastoral Vadi — translated as idyllic valley — has been working with area farmers to help them convert to organic production over the past 10 years.

Pastoral Vadi’s manager, Nebi Cihan Gankaya, organized the first-ever Transition training in Turkey to “learn how to solve problems in the community.” Gankaya recently received a grant from the Turkish government for the Sustainable Live Model in Yaniklar Village, a project that will improve the area’s sustainability through eco-tourism and develop a biogas energy-production facility.

Transition training participants expressed their interest in finding common ground to work with people who have different attitudes toward sustainability, to live in more natural communities, and to work toward communities that are not oil-dependent. The workshop led everyone through exercises for the two components of the Transition Movement — Outer Transition (the issues of Peak Oil, climate change and global equity) and Inner Transition (an introspection that examines how and why fossil fuel-dependent, consumerist societies have developed) — and gave them basic information they could take home and work on with community members.

Smyth provided examples of communities undergoing the Transition process and those who have been successful in already making the change, such as Heathrow and Totnes, England. Even Pastoral Vadi’s sustainability initiatives, including eco-architecture, permaculture growing systems, traditional wood-fired cooking techniques, and use of local and organic foods, make it an example of a Transition experiment. “This is a Transition project, whether it’s called one or not,” said Smyth.

This workshop was just a small piece of what participants need to make the Transition movement a reality in their towns. “We need to communicate beyond the usual suspects, beyond the green bubble. We need to make the movement inclusive and accessible to people who might not have gotten involved in an alternative movement before,” said Smyth.

“My hope is they received encouragement for being a part of the Transition movement and for starting their own Transition,” Gankaya said.

Freelance writer and UF contributing editor Lisa Munniksma is spending six weeks in Turkey as part of her round-the-world journey to learn about agriculture, food systems and sustainable living everywhere. Follow her trip at www.freelancefarmerchick.com.