Excessive rains this spring have caused short-term nesting problems for bird and small-mammal populations, according to the Pennsylvania Game Commission. 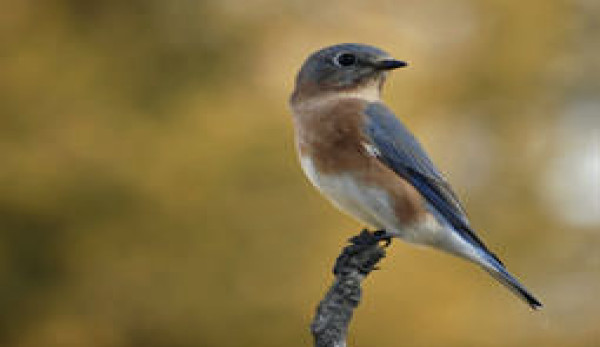 In an unfortunate turn of events, the first nesting attempt for bluebirds behind the Pennsylvania Game Commission’s Harrisburg, Pa., headquarters appears to have lost out to nature.

“The first setback for this nest was when only two of the five eggs hatched,” saysÂ  Doug Gross, Game Commission ornithologist.Â  “While it is not usual for an egg or two of a clutch to fail to hatch, having three fail to hatch appears to have been a harbinger of bad luck for this nest.â€ť

The Game Commission speculates the wet spring may have played a role in the nestâ€™s demise.

â€śWet weather makes it difficult for adults to find food and feed [their] young,â€ť says Gross. â€śThey have to find food, making them vulnerable to predation or other kinds of mortality, such as getting hit by a car. The more you have to wander around, the more likely something will get you.â€ť

While the adult bluebird pair may attempt to re-nest, Gross and other Game Commission biologists agree that the excessively wet spring has been difficult for many kinds of birds and mammals.Â

“Most songbirds, including bluebirds, forage on insects during the nesting season,” Gross says. “When it is raining regularly, they have greater difficulty finding adequate amounts of food for their young. The nestlings are very demanding of food, requiring several visits each day. The very young nestlings also are poorly insulated with natal down, so prolonged absences by the adults mean that they are unprotected from the cold, often dying of exposure if not starvation.Â Â

“If the adults are away longer, the nests and their contents are more vulnerable to predation from domestic cats left to run free, as well as wildlife predators, such as raccoons, skunks, chipmunks, squirrels, opossums, snakes, crows, ravens, jays and hawks.”

Ground-nesting birds are particularly vulnerable, he says, because hard rains and runoff can drown the exposed eggs or young.

“Large-stick nests of some of our raptors are vulnerable to getting soaked and weighing down their supporting tree or snag. Some bald eagle nest trees have been washed away by flood waters this spring. High, muddy waters make it more difficult for visual predators, like bald eagles and ospreys, to find their food, causing them to range farther from the nest to provide adequate food for their young. Some raptor nestlings starve when their parents cannot hunt prey during bad weather.”

Mary Jo Casalena, Game Commission wild turkey biologist, says wild turkey nests might be impacted from the wet spring, too. Hen turkeys incubating eggs have no choice but to tough out rain events.

“Wet hens emit more odor than normal, so mammalian predators, with their keen olfactory sense, can more easily locate these ‘smelly’ hens, and either cause the hens to abandon their nests, or actually kill them on the nests,â€ť Casalena says. â€śKeep in mind that [for ground-nesters] predation to nests normally is high, and hens are most vulnerable to mortality during nesting season.â€ť

John Dunn, Game Commission Game Management Division chief, noted that cavity-nesting wood ducks, such as common mergansers and hooded mergansers, can have their homes washed away or flooded by high waters.Â Â

“Game birds can re-nest if losses occur to nests or young, but second-clutch sizes are always lower and nesting success is reduced compared to first nests,” Dunn says. “Cold springs accompanied by wet weather have a bigger impact than just high precipitation. Since the peak of hatch is late-May/early-June for turkeys, grouse and pheasants, the weather we have the next couple of weeks will be more important than what occurred earlier.â€ť

Ground-nesting mammals, such as cottontail rabbits, also are affected by extremely wet conditions.
Â
“Cottontails construct a nest at the bottom of a slanted hole about 7 inches below the ground surface,” says Tom Hardisky, Game Commission game mammal biologist. “Newborns are left unattended by the adult female, except for periodic feeding, until the young leave the nest at about 2 weeks of age. Cottontail litters rely on body heat from one another and are particularly vulnerable to flooding rain and high water tables.Â  Females will re-nest if a litter is lost.

“Most mammals that reproduce in a den will move their newborns to a drier site. However, many species of small mammals, as well as most rodents, nest on or below ground level. Some aquatic rodents in stream habitats, such as muskrats, are very susceptible to mortality from sudden water-level rises. Muskrat burrows that quickly fill with water can entrap adults and their young, causing them to drown. Prolonged flooding will displace surviving muskrats to new areas, where they may experience food scarcity, greater exposure to disease, or increased predation.”

Weather-related phenomena can be tough on wildlife in the short term but should be kept in perspective, according to Calvin DuBrock, Game Commission Bureau of Wildlife Management director.

“As long as overall populations are healthy and adequateÂ habitat is maintained on the landscape, there’s little cause for concern about long-term effects,” he says.