When you happen upon an owl in the middle of a dark country road, you basically have to help it, right? 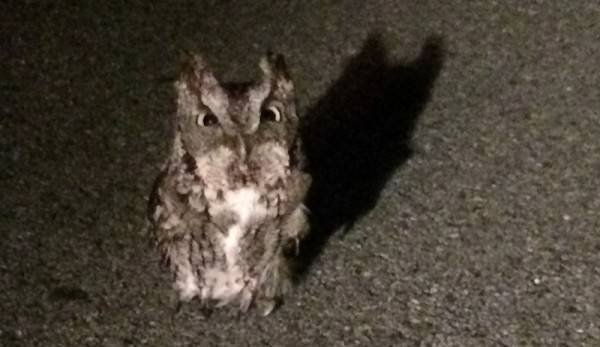 It seems like my life has turned into a professional game of â€śI Spy.â€ť Mr. B and I are constantly pointing out the eccentricities of nature as the circle of life unfolds around us. Looking out the living room window: â€śDid you see that skunk?â€ť Gazing out from the porch: â€śWhat butterfly was that?â€ť Walking through the woods: â€śCan you name this wildflower?â€ť We discovered perhaps our most interesting find of all this weekend while driving the country roads back to the farm.

Saturday night, on the way home from dinner, Mr. B and I were chattingâ€”probably about which farmhouse project to tackle nextâ€”when our car passed over something in the road. It was a strange-sized blob, standing more upright than a stick or a rock might. A thought flickered through my mindâ€”â€śWas that an owl?â€ťâ€”but I wasnâ€™t going to say anything. All too often Iâ€™ve speculated my sightings out of hope only to have been let down. But then Mr. B confirmed it out loud: â€śI think that was an owl.â€ť

â€śWell, you have to turn around!â€ť I insisted. Iâ€™ve never seen an owl up-close and personal in the wildâ€”this was my chance! And, of course, we couldnâ€™t leave the poor fellow in the road to get run over by some heartless passerby â€¦ of course.

Mr. B slowed down for a U-ey, though with hesitancy, because surely that owl wouldnâ€™t still be in the road after we just drove over it. Surely not. But Iâ€™m rather persistent, and he caved to my request.

To put our question to rest, it was indeed an owl. A small one … with a fierce stare. Much to our surprise, it was still there, seemingly unfazed. Or maybe it was startledâ€”I havenâ€™t mastered the subtleties of owl body language quite yet. I mistook it for an owlet due to itâ€™s size, but after some prompt Googling, I learned I was wrong. It was an eastern screech owl, which only stands about 6 inches tall, and perhaps the most chill one Iâ€™ve ever seenâ€”though given my oh-so-frequent interactions with eastern screech owls, thatâ€™s not saying much. We sat there with our car stopped in the middle of the dark road, hoping the bird of prey would tire of the bright headlightsâ€”and the bright paparazzi-style flashes of our camerasâ€”and fly away. It didnâ€™t.

â€śWe have to get it out of the road,â€ť I pleaded with Mr. B.

With our carâ€™s flashers on, we got out to try to shoo it to safety. Now, folks, heed this disclaimer: Donâ€™t take our actions as permission to do this on your own dark country roadsâ€”we could have gotten hit by a car or bitten by an owl, both which have been terrible tragedies. As you know, whenever dealing with nature, you have to use your senses, and we used our best judgement to proceed in what we felt was the best interest of ourselves and this magnificent creature. If you would have done differently, Iâ€™d love to hear your thoughts in the comments below.

Now back to our story.

As Mr. B approached the owl (and I kept a safe distance), it gave him a good sizing-up, slowly scanning his body, looking him directly in the eye, and slowly scanning back downâ€”but it obstinately stayed put. Mr. B found a log, and pushed it toward the owl, hoping it would hop on or simply move away from it toward the berm. Still giving Mr. B the side eye, it kept firm footing. â€śHoo the heck is this guy?â€ť was surely running through its brain. (Couldnâ€™t help the punâ€”sorry not sorry)

I hopped back in the car, thinking we should probably just let this little owl be. Maybe it was sitting in the middle of a dark country road for a reason. Why should we exert our human authority over it? Then Mr. B gave it one last little nudge with the log, and the most magical thing happened: It spread its wingsâ€”a wingspan that seemed to triple its sizeâ€”and silently flew to a roadside tree. I mean, it was dead silent! None of that flapping ruckus common to other neighboring birds, like crows and buzzards.

We went to bed that night satisfied weâ€™d done our daily duty for the animal kingdomâ€”but not without a little more Googling. And thatâ€™s where our epilogue begins.

A friend of ours let us know that eastern screeching owls make a funny whinnying noise that sounds like a horse. (It does! Listen to it here.) What we happily learned is that this is the sound that Mr. B and I have been obsessing over during our farm walks. We love it so much! Maybe weâ€™ll be spotting another tiny but fierce owl again soon in less precarious circumstances.