What Are Root-Knot Nematodes?

Understand how these microscopic pests work so you can spot their damage and save your crop. 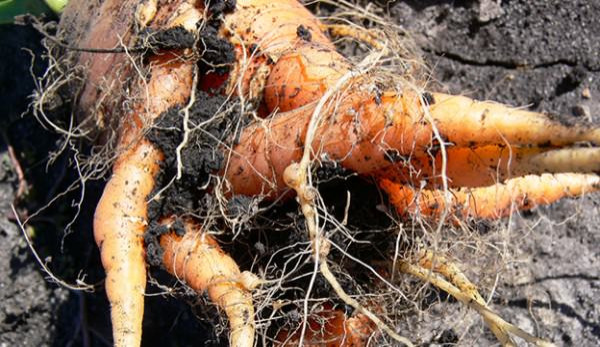 by Rebeca KuropatwaSeptember 8, 2015
PHOTO: Ontario Ministry of Agriculture and Food

Your farm soil is much more than just dirt. As any good farmer knows, the earth that you grow your fruits and vegetables in is teeming with lifeâ€”life that can add to the vitality of your crop or cause big problems. Nematodes are one of the worldâ€™s most abundant organisms, and they can do both.

These microscopic, worm-like creatures like living where itâ€™s wet, so you can find them in both soil and water. Many nematodes are beneficial, breaking down organic debris or attack pests. Some are even used by farmers as a biological tool to control soil pests, like grubs. However, some nematodes will attack your crop.

“We call those plant-parasitic nematodes,â€ť says Michael Celetti, plant pathologist and horticultural crops program lead at the Ontario Ministry of Agriculture and Food.

Root-knot nematodes are one of these plant-parasitic nematodes. They disrupt the transportation of water and nutrients from the roots to the shoots, resulting in reduced plant growth and yield. These pests overwinter in the soil, and once the soil becomes favorable, the eggs hatch and the nematodesâ€”the majority of which are femaleâ€”migrate to the host plantâ€™s roots. The extensive list of crops hosts includes strawberries, cane berries, tomatoes, potatoes, celery, carrots, melons, some grapes, sugar beets, peas, many different legumes, dandelion and thistle.

When root-knot nematodes reach the host roots, the young females penetrate just behind an active, growing root tip, using their hypodermic needle-like mouth, called a stylet, to suck the juices out.

“They then burrow deeper into the root to where the water and nutrient-connecting vessels are, which is where they will seed,â€ť Celetti says. “They stay there the rest of their lives. Theyâ€™re sedentary from that point on.â€ť

“The saliva they inject through their stylets causes the cells around where theyâ€™re feeding to enlarge and then engulf the female body, forming a ball-like bulge sized around 1 millimeter to 2Â˝ centimeters [about 1 inch],â€ť Celetti says.

Meanwhile, the male root-knot nematodes move along the roots doing very little damage, as their focus is on finding reproductive mates. 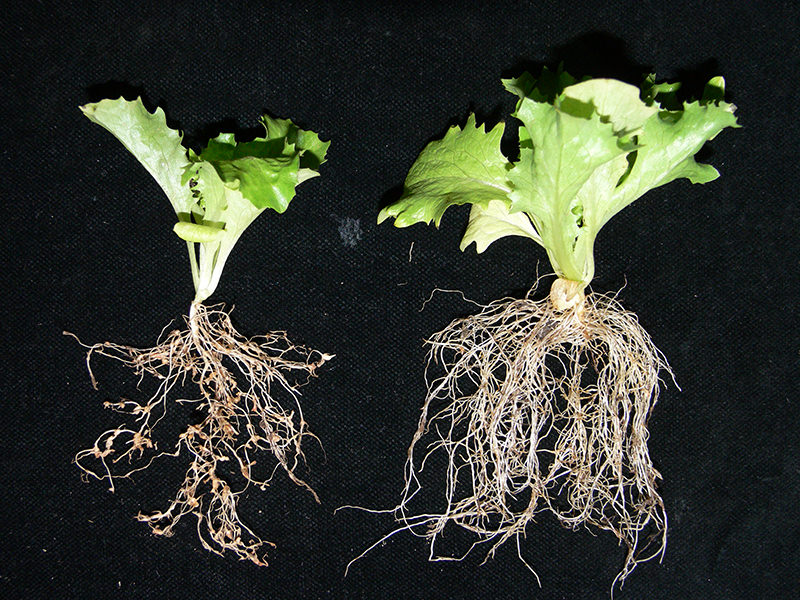 Ontario Ministry of Agriculture and Food

In many instances, crops infected by root-knot nematodes produce many small, secondary roots around feeding sites, creating a hairy-root appearance around the knots. Some often wilt during the day, and for a time, may recover overnight, though severely affected plants appear stunted. Plant leaves may present nutrient deficiencies: Susceptible tomato varieties, for example, will have a purplish tint to the leaves resembling phosphorus deficiency. Root-knot nematode damage can also enhance the severity of other disease symptoms.

Because root-knot nematodes prefer sandy soils, they tend to be most problematic in sandy soils and muck. Youâ€™ll rarely find them in clay or heavy soils, as they need space to maneuver through soil particles.

Root-knot nematodes can be best managed by planting crops or varieties not susceptible to damage; however, there are products that can be applied to crops prior to planting, though this requires a two- to three-month head start on seed-starting.

Another prevention method is inspecting your crop when transplanting.

“When a grower is transplanting a crop, such as celery or what have you, they can inspect the roots for tiny knots and other diseases,â€ť Celetti says. “If thereâ€™s swelling [along the roots], they shouldnâ€™t be planted.

The key is to spot root-knot nematode damage early, because once itâ€™s established, it becomes much more difficult to manage. Because they have such a broad host range, crop rotation alone will not suffice. 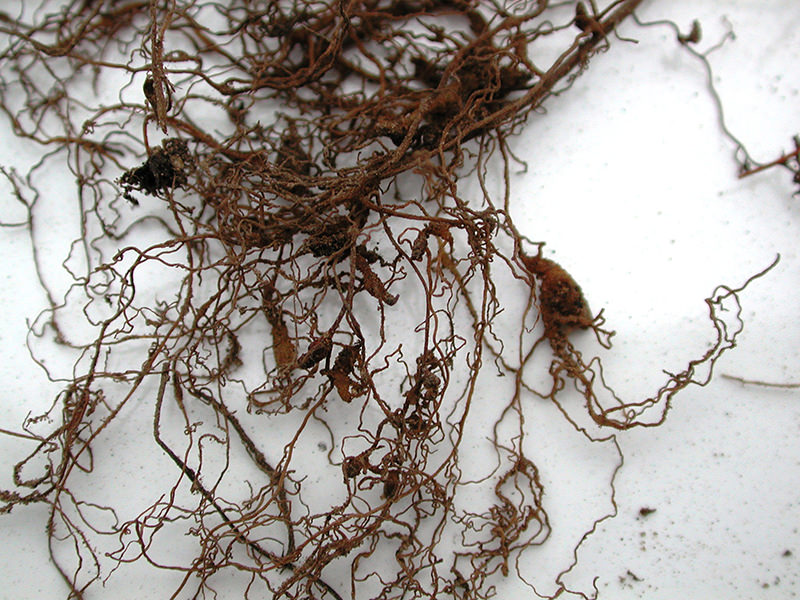 Ontario Ministry of Agriculture and Food

“Crops like cereals, corn and grasses tend not to be susceptible to this pest, so if you can have long-rotation crops like these for a couple years, it will help reduce population levels,â€ť Celetti says.

Cover-cropping with some varieties of oriental mustard, is a good natural way to help reduce root-knot nematode populations, as they act like a trap crop.

“These oriental mustards have natural chemicals called glucosinolates and enzymes in different cells in both their flower parts and leaves,â€ť Celetti says. “When the leaves and flower parts are chopped, the enzymes react with the glucosinolates to produce volatile gas-like compounds, called, isothiocyanates, which are toxic to nematodes.â€ť

Grow the mustard until it flowers, then chop it down. By killing the host mustard plant when it is green and just beginning to bolt, all damage-causing female nematodes that have not yet reproduced are eliminated with the plants.

“So, by killing the mustard early, you will stop the nutrients from reaching the nematodes in the roots, which will, in turn, stop the reproduction of any root-knot nematodes that have gotten into the mustard root up to that point,â€ť Celetti says.

Immediately after chopping, use a rototiller to incorporate the mustard green manure into the soil, followed by a packer or watering mechanism to seal the isothiocyanates into the soil. This is best done before a good rainfall.

“It is important to chop, incorporate and seal the soil before it comes in contact with the nematodes and kills them.â€ť

By keeping an eye on your crops and looking for signs of root-knot nematode damage, you can nip the problem in the bud before it becomes out of control.

Rebeca Kuropatwa was born and raised in the prairies of Manitoba, Canada. She shares compelling, inspirational stories of courage, survival and overcoming adversity, reporting not only on current issues but of the women and men behind the headlines. She holds a degree in political science and professional writing and lives in Winnipeg with her husband and daughter.