What Children Can Learn Through Butchering

Raising animals for meat could be a scary thing for kids, but it doesn’t have to be. There’s a lot they can learn through the butchering process. 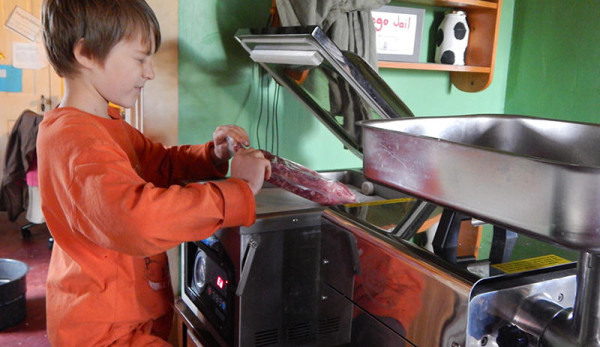 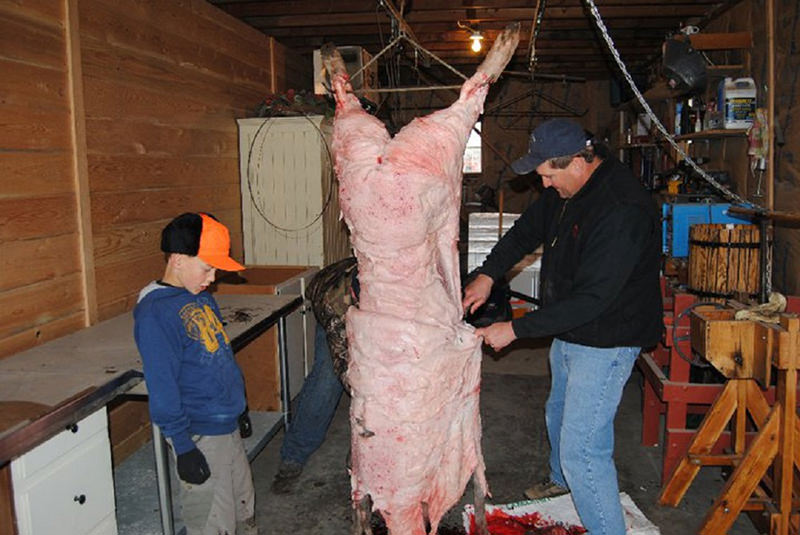 Aren’t you worried your kids will have nightmares?

That was the question put to me by a concerned mother when I mentioned our family would be butchering chickens that weekend.

Nightmares? Honey, I’d be more worried if my child reached adulthood and had never seen the sacrifice it takes to keep her fed and healthy. If you’ve ever struggled with the question of whether to include your children in your slaughtering and butchering activities, here are some things to consider as you make the decision that’s best for your family.

We kill nearly everything before we eat it. Pick a tomato from the vine and put it in your mouth, you’ve stopped the growing process of that tomato. It’s the same with the oats you eat for breakfast—dead as a doornail once harvested. Eggs. Yep, you kill a potential chicken every omelet you make (that is, if it’s a fertilized egg).

The point is that producing food requires sacrifice. We trade our labor, time and energy to produce food for our bellies, while the plants and animals trade their life cycles. Even for vegetarians, this is the way of the world. In our contemporary culture, many of us have lost a connection with our food and the sacrifice it requires. Modern children are particularly prone to this ignorance, as they’re raised in a society that teaches them that the French fry is a vegetable. A potato is a vegetable that requires nutrient-rich soil, water and a patient hand to tend long enough for it to bear fruit and be harvested. A packaged French fry is something entirely different.

One of the reasons we choose to have our children participate in the harvest and butchering of animals on the homestead is so that they know the sacrifice involved with food. They tend the plants and animals, and then they harvest those plants and animals. Only after all that sacrifice do they eat.

As my friend Jenna from Flip Flop Barnyard said to me recently:

“As a family, we raise as much of our food as possible. It’s extremely important to us that our children understand where their food comes from, what goes in to raising it, how the animals are treated, what the animals are fed and how the animals are harvested. We have butchered chickens and pigs as a family. Our children are always happy to participate and excited to learn. … We take great comfort in knowing that our children will grow into adults that can take care of themselves and their families. They will know how to raise and harvest their own food, as well as many other life skills learned through this whole process.” 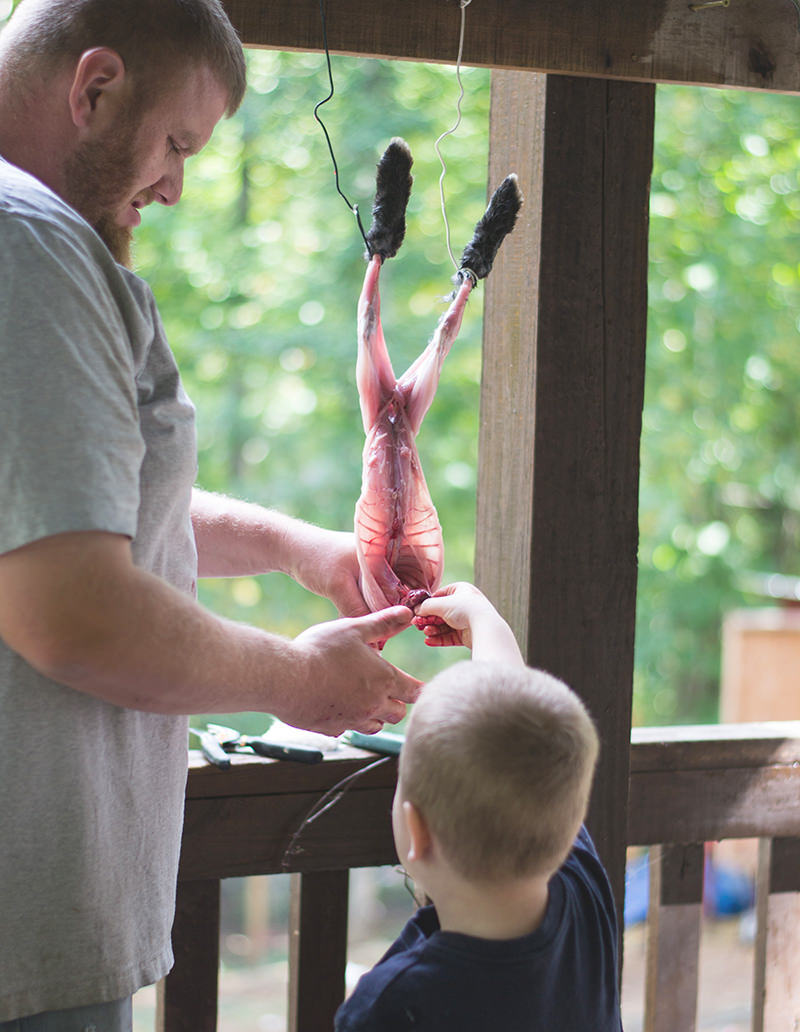 I’ll never forget the first time we ate a chicken that we’d raised in our backyard. My husband and I were raised as city kids and never thought much about where our meat came from, except that you could find it in the freezer section of the nearest grocery store. When we stewed and ate that first hen—a retired layer—we were weirded out. It was new to us to be consuming an animal we’d known.

As we finished our soup, though, we started talking about it with our, then, very little children, and they kept saying how nice it was of our hen to give her life for us. They observed that without her, there would have been no chicken in our soup. In their way, they were communicating gratitude for the sacrifice of the chicken.

Although we’d given thanks over every meal up until that chicken soup, it had always been solely to God; now we give thanks both to the Creator of the chicken and the chicken itself—or the pig or the pumpkin, et cetera.

Gratitude for each bite we take—for each meal we are able to enjoy—is a vital skill to develop if we want to live abundantly. Too many of us waste food, and our children see that and learn to think of it as normal. There’s nothing normal about indifference toward the production and provision of food. As author and speaker Mary Edmunds said, “It’s wrong to waste, no matter how much of something you have”. The statistics on food waste in the U.S. are staggering, and I think it’s simply because not enough of us are connected to our food through personal sacrifice and genuine appreciation.

Kids are kids, whether they live on a farm or in an apartment, and no kid likes chores—they’d rather be off doing their own thing. My kids live on a homestead, and although our homesteads have ranged from tiny specks of land to many acres, the chores are the same. A big part of the work my children do is with the animals because in my experience, children are natural husbandmen. Because my children have been involved in raising animals from the time they were itty bitty, they understand the role the animals play on our homestead.

Some animals produce manure, some produce eggs or milk, some till and work the soil, and some animals become dinner. My children love on those animals and let their gratitude for the animals’ sacrifice be shown in the tender care they take of them. It would never occur to my children to be callous or cruel to an animal—it would go completely against their nature and how they’ve been raised.

This natural affection provides motivation when the coop needs cleaning or the barn needs mucking. When it’s time to get up and rotate pens, dust for mites or provide a hose bath for the pigs on a hot day, I still get grumbles, but the animals always get love and attention. Our animals are what keep us going outside every day, rain or shine. They keep us connected to the land and the cycles of work. We’re grateful for the ways in which the animals teach us to see and appreciate the abundance that surrounds us in nature, whether we’re raising them or harvesting them to eat.

The Work Makes The Child 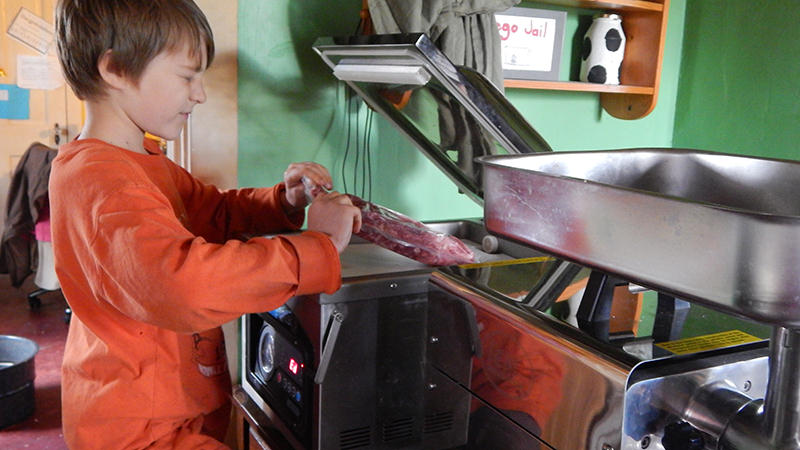 The longer I’m a parent, the more I realize that teaching my children to work is one of the most important parts of my legacy and their success as good stewards of the earth. How did we reach this place in the history of our culture where the value of work has become weak and threadbare? As adults, too often we think of children as liabilities, instead of the great assets that they are. Perhaps it’s time we spent more time letting them work side-by-side with us without the pressure of requiring they do everything exactly as we do. Maybe we should try a dose of inspiration instead of a pound of criticism, or worse, apathy.

The other day, I was late getting out to the barn, so I asked my 11-year-old if he would just take some food down to the goats and I’d deal with their water and moving them to their day pen later. He tromped right out there and attended to all the goats’ needs from water to hay to pasture. If you’ve never met a goat, just know that they can be a bit unruly. My son was totally capable of doing the tasks on his own, even if the goats were a challenge.

Why had I never had him do it all on his own before?

Because I still think of him as 5 years old. I’m really good at involving younger children in the chores as long as I’m there to supervise, but I’m less skilled at stepping back and letting them do things on their own. The more I work that boy like I would a man, the more he becomes one. My girls, too, are little women when I give them space to be grown up. This mama just needs to let her children do more work independently, and the animals can help me with that.

Animals, in their own way, are great mentors for children: They require a steady stream of child-driven labor, teach lessons that can’t be learned without hands-on experience, and provide opportunities for children to learn patience and diligence. Once it comes time to harvest them, and even after they’re gone, the animals continue to teach us.

These are just a few points to ponder as you weigh your goals as a parent trying to raise hard-working farm sprouts. Next week, we’ll cover some practical tips and suggestions for getting the children involved in the animal harvest this year.

One reply on “What Children Can Learn Through Butchering”

[…] you have children, raising chickens serves as an excellent means of learning about the great circle of life. You and your little ones can observe an incubating egg, watch a […]