What Do You Do When Your Cats Are BFFs With A Raccoon?

A neighborhood raccoon wants to become one of the family, so I guess we’re in for some trouble. 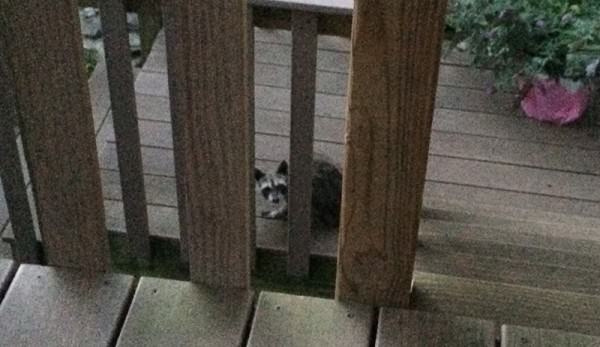 Upon coming to the farm, I knew animals would be a big part of life here. Of course, my pudgy indoor cat, Kat, moved in, and with the property, we inherited two supposed “farm cats,” Jackson and Linny, who don’t take their jobs as mousers too seriously. There are also plans in the works for ducks and chickens and potentially other farm animals.

And then there’s Ralph, our resident raccoon.

Let me preface this post by saying I understand the socially acceptable relationship between people and wild animals, despite my suburban origins. Mr. B and I are nature lovers and want to promote a diversity of wildlife on our farm to maintain a thriving ecosystem, but we also understand that healthy boundaries need to be maintained between us and the creatures that crawl our land. (No figurative bison selfies for us, thank you.)

Ralph, on the other hand, doesn’t quite accept those boundaries. And given the fact that we’ve named him—or her—you know where this is going.

We met Ralph in an encounter that startled both parties. Mr. B opened the door to our porch, and there was Ralph, a juvenile raccoon, face first in the cats’ water bowl, with Jackson and Linny lounging nearby watching. Yelling and stomping ensued, throwing everyone in a tizzy, though it wasn’t quite the discouragement Ralph needed to keep his distance.

Every evening, when I have three cat faces begging me for their dinner, I can sense another set of eyes watching me from the distance. And sure enough, when dusk casts its shadow over the farm, our uninvited guest comes to join us for the feasting.

I have to be honest: I find little raccoon faces incredibly cute. I also have an unrelenting curiosity for the nature around me. So, maybe I haven’t done my due diligence in putting this critter in its place. Despite a minor scuffle between Jackson and Ralph that was all attitude and no substance, the raccoon hasn’t caused any trouble besides the constant attempts to nibble on the cats’ leftovers, so from time to time, I like to observe this creature’s behaviors.

Ralph is quite intelligent. He’s learned our habits, and I think the cats have taught him the ways of the humans who own this place … like if you give them sad kitty eyes they’ll cave to anything. (Not quite true.) He doesn’t like to ruffle feathers, and he keeps a cautious distance from those bigger than him. The cats seem to be OK with him, which I know isn’t a good thing, but I get the sense that they consider him one of their own—like one of their wild redneck cousins.

Nonetheless, we have graduated from clapping and stomping to pan-banging to run him off our porch because the milder approach was becoming ineffective. The first time we dragged out the cookware cymbals, he scurried up a tree, sitting on a branch where he could safely observe us through our kitchen window. (I know it’s a raccoon, but I felt oddly creeped out by the notion.) We watched each other for a while, a pane of glass and several tree branches between us, but as soon as he noted that the crazy lady who makes loud noises had lost interest, there he was again, back on our porch, nearly nose-to-nose with our indoor cat (thankfully through a screened door), who also has become fascinated by the new animal that has started making himself at home here.

Now, I realize Ralph’s behavior can’t go on forever. Soon this smallish raccoon will grow into an adult and we’ll have bigger problems on our hands: aggressive behavior, diseases, home damage, helping himself to our kitchen like a teenage boy. (You never know—they’re geniuses with food on the brain!) Plus, we can’t have him going face-to-face with our future chickens. If necessary, we may have to take drastic measures to keep him away from our home and animals, but the thought of that breaks my heart, so I hope it doesn’t come to that. Please, Ralph, go back to your home in the wild peacefully and willingly.

Have you dealt with a raccoon who started getting a little too close for comfort? What did you do to discourage it?