What Exactly Is a Compost Pedaller?

A team of cyclists collects yard and kitchen scraps and delivers them to community gardens and urban farms. 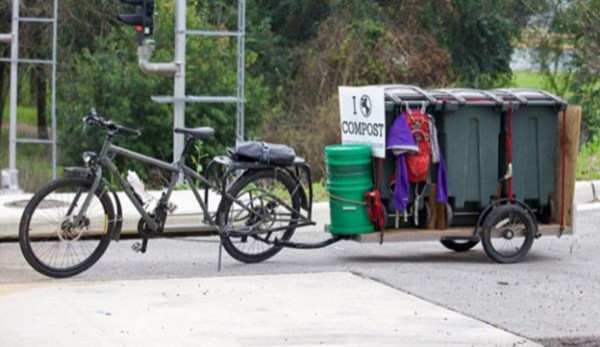 While youâ€™re likely familiar with compostingâ€”and bicyclingâ€”you may not be all that familiar with compost pedaling. Dustin Fedako started the concept in Austin, Texas through his company, Compost Pedallers. The company marries the idea of composting with bicycling, creating one of the greener and more convenient ways to compostâ€”one that also benefits the community.

A team of bicyclists from Compost Pedallers travels to homes and businesses in the Austin area, collecting yard and kitchen scraps, Civil Eats reports. The scraps are then delivered to community gardens and urban farms. According to Civil Eats, “Fedako says the company has diverted half a million pounds of waste from landfills and donated $13,000 worth of natural fertilizers to local growers.â€ť He added that the company is building an interconnected composting system. “[We] have the most points of connection in the Austin food system. We go into the kitchen of the farm-to-table restaurants to talk to the chefs. We go to the local urban farms, community gardens, the backyard market gardens, and the nonprofits like the Sustainable Food Center. We support the entire system.â€ť

This system is beneficial to the connection of the various entities in the cityâ€”theyâ€™re now supporting one another. But why bikes? Take a look:

The Austin community feels the Compost Pedallers are doing such great work that the demand for the companyâ€™s services has expanded. However, that demand exceeds what Compost Pedallers is able to do. The company has set up anÂ Indiegogo campaign page to raise funds for electric bikes, which will help the pedallers carry more weight and give them an extra push.