What Goes With Potato Pancakes?

Potato pancakes, also known as latkes, are a traditional Hannakuh dish, and they need something to go with them. Here are several ideas. 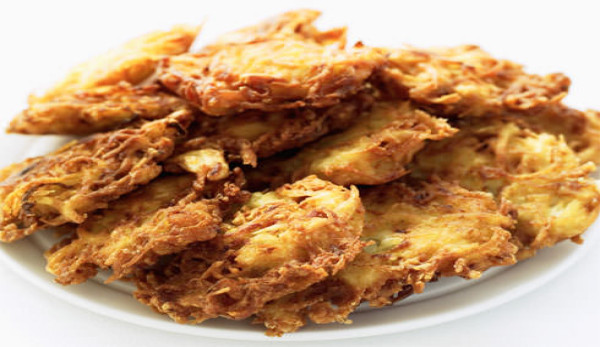 Potato pancakes, or latkes, the traditional Eastern European dish for Hannukah, are intensely personal. How to grind the potatoes, how much to drain them, how much oil to use; how much, if any, â€śfillerâ€ť to help them stick together. All of these things are subjects of debate, even with a relatively simple recipe. Iâ€™ll leave you to figure out the style you like.

Letâ€™s focus on what to serve with the latkes. Some families make a beef brisket, the go-to meal for any Jewish holiday but, in my family, we make the meal all about the latkes, so I fill it out with accompaniments. The first two here are the most traditional. A number of the others kind of spin off the ingredients of the pancakes or off of other elements of Jewish cuisine.

Applesauce: This is the usual accompaniment to potato pancakes, jarred or homemade. Combine the applesauce with dried apricots, cranberries or cherries. Cook briefly to soften the dried fruit.

Horseradish Sauce: Mix prepared horseradish (or peel and grate a fresh root) with sour cream and chopped dill. Or mix it with some applesauce instead.

Roasted Beets: Wrap them individually in foil. After roasting at 350 degrees Fahrenheit for 20 minutes or so, the skins will slip off. Served sliced.

Itâ€™s a little messy, but the grandma trick for latkes is to pile all the grated potatoes in a dishtowel, wrap it up and squeeze out the excess water. That makes the potato pancakes crispier. You still have to fry them fast though, or the grated potatoes turn an unappetizing blue-gray.

Braised Leeks: Clean four to six leeks well, using only the white parts and splitting them in half. In an ovenproof sautĂ© pan, lightly brown them in 1 to 2 tablespoons of butter. Then add 1/3 cup broth, cover them with foil and cook at 350 degrees in the oven until very soft, about 15 minutes.

Caramelized Onions: Slice up three to four medium onions. Let them cook slowly in two to three tablespoons of butter. Wait patiently 30 to 40 minutes until they are soft and browned, adding a little water or white wine so that they donâ€™t burn. Sprinkle with thyme and a tablespoon of cognac.

Sauerkraut: Drain and rinse, if you like. You can add sautĂ©ed onion, sliced apples, caraway or fennel seed and a splash of white wine to it. Serve warm or room temperature.

Carrot Puree: Cook peeled carrots in chicken broth until very soft. Puree in a food processor with about 1 tablespoon of butter and about 1/2 teaspoon cumin for every six carrots. Season with salt and pepper, adding a bit of sugar too if the carrots are bitter.

Sliced Smoked Salmon:Â You can also use salmon to make gravlax.

Chopped Hard-Boiled Egg:Â Include plenty of chopped parsley and capers.