What I Learned Through Losing A Litter Of Piglets

No one said that your first forays into farming would be easy. Sometimes the most valuable lessons come from the toughest experiences. 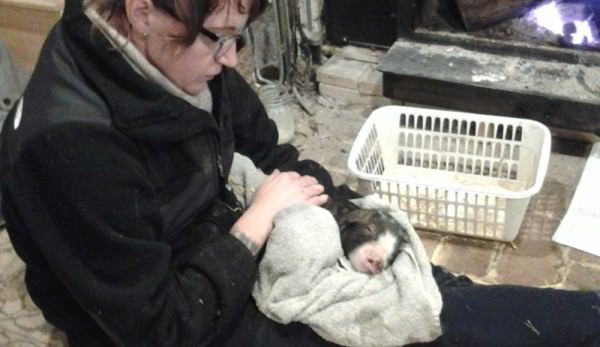 When I first set out in pursuit of fantastical agrarian aims, pig farming wasn’t exactly at the top of my list. But when fate and a fellow farmer placed a pair of Berkshires on our burgeoning family farm, my wife and I knew we were destined for a porcine life.

For a while, we purchased piglets from a trusted breeder of high-quality stock, but eventually economic pragmatism and a poorly managed struggle with control issues led us to online listings, where we quickly found and purchased a pair of registered Berkshire breeding pigs.

The first litter was a bit of a surprise. We’d bought the sow bred, and the seller’s dates had been wrong by about a month. The babies arrived on the coldest day of that winter, and we scrambled to get piglets warm and nursing. Farrowing in February is, generally speaking, an ill-advised venture for a pastured-pig operation, but our first experience as hog breeders ended successfully—we lost two, but 12 piglets survived and thrived until their processing date.

Our second farrowing was borderline easy. Equipped with limited experience, we predicted the due date (pigs gestate for 114 days), prepared well in advance and welcomed nine piglets on a warm, summer day. And we kept nine piglets, too—in fact, we took the last of them in a few days ago.

And so we embarked on our third farrowing feeling pretty confident. We’d braved the worst and come out on top. We were pig farmers.

When the time came for our sow to deliver a third time for us, the winter weather hung high in the upper 50s, a sure sign this litter was destined for greatness. We kept an eye on mama, noting all the stages of her labor, but with the weather cooperating, we’d resigned ourselves to stay as hands-off with this birth as possible. So when I walked out for morning chores and discovered she’d delivered while we slept, I counted it fate that our family had missed it. I counted 13 little wigglers at the sow’s teat! The piglets’ first day was the warmest we’d experienced yet, and the tiny trotters were up and active. The sow kept lying on her bottom teats, but by mid-day, all seemed well.

I’ve been told that a piglet 24 hours old can survive anything, but, in truth, piglets don’t begin to regulate body temperature until at least 2 days old. Even then conditions should remain somewhat consistent.

That night the temperatures plunged into the 20s, and the new piglets wouldn’t stay under the heat lamps. By morning, a few were dead; by mid-morning, half of them. I watched mama, also disoriented by the violent weather shift, sit on one and trample another. When we were down to just three, we grabbed one that was obviously struggling and brought him inside. By the next morning, he was the only survivor.

Despite our veritable library of books on farming and animal husbandry, not to mention the mentorship of some trusted farmer friends, I’ve come to understand there’s really no substitute for experience when it comes to agriculture. And I understand that not every experience ends in a resounding success—oftentimes, the best lessons are the hardest ones. I also know that in losing a pig litter, our farm is hardly alone—it happens to the best of them, and it’s never easy. So, after a few days of mourning, mama rejoined the boar and set to work on producing a replacement litter due in early summer.

We were due another new pig farming experience too. Since stumbling into this mucky life, we’ve been told numerous times of farmers raising piglets by hand, and that’s what the weeks following the litter loss held for us. At first we didn’t know if the lone piglet would survive, but after a few hours in front of the wood-burning stove, the tiny animal rallied, attacking a pan of milk with a ferocious appetite. In the ensuing weeks, he took over the house; finally, when our home adopted the odor of the barn outside, we moved him into the sunroom. When the weather warmed enough, he relocated to a pen outside, and now he’s grazing in a pasture adjacent to his mother and father.

And we kept him a boar, opting to forgo castration: This gives him an occupation alternative to “main course.” Sometimes it’s too hard to eat a friend.

Experience is most valuable when it provides lessons for future behavior, and the lost litter has taught me a few things to remember going forward:

Winter litters are valued by 4-H clubs and spring hog roasters, but the stress and increased expenses of a cold-weather birth don’t pay off for a market farmer. Instead, I’ll watch the calendar and mind my schedule to make sure the boar is nowhere near a sow 114 days before the coldest time of year.

Although pastured-pig farmers often speak of a pig’s “pigness,” farrowing is one area where pigness doesn’t always pay. In future deliveries, I’ll plan on closer monitoring and being available to help struggling newborns.

3. Hand-raising a piglet isn’t that difficult.

Simply warm up some cow’s milk, adding in a bit of light corn syrup to aid in digestion, and provide the feed in a dish (and keep a towel handy—it’s a messy affair). Add oatmeal after a week or so. Also, piglets are trainable to a litter box … sort of. Finally, don’t forget the iron: Indoor piglets need either an iron shot or a box of soil to root around and nibble on.

Industrial pork farms maximize profitability by reducing litter loss, but we aren’t industrial farmers. Barns get cold, weather patterns shift, and piglets aren’t predictable. Sometimes litters die despite the best efforts. I’ll do my best with what I have.