What the Frack? Beginning Farmers’ Energy and Pollution Dilemma

As fracking for natural gas becomes widespread across the U.S., it puts beginning farmers’ sustainability and bottom line at risk. 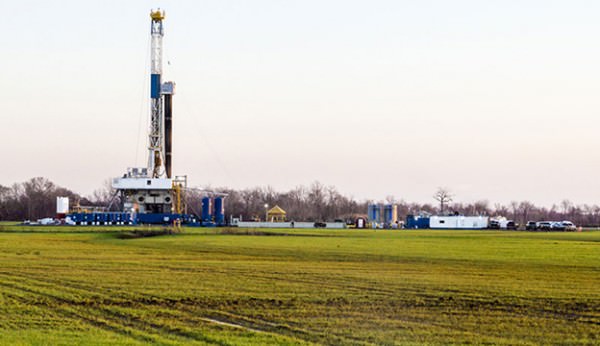 There’s a cost to using any form of energy, whether fossil-fuel-based or from the sun. Until we downsize and become energy misers—opting to ditch the air conditioning in preference of a shade tree—we’re left with an unending thirst for energy to power our current lifestyle, on farm or off.

Renewable energy sources clearly prevail in terms of their supply and environmental impacts, but cost overwhelms their widespread adoption—at least for now. So the question becomes: What’s the least destructive alternative until there’s enough affordable solar for the masses? Natural gas emits less carbon dioxide when compared to coal or oil, and there’s a lot of it in the U.S.—but it comes at a price.

Getting natural gas out of the ground was once difficult and expensive. However, hydraulic fracturing, aka fracking, has made vast stores of natural gas readily accessible, severing our nation’s dependency on overseas oil. Fracking involves drilling through bedrock and injecting a pressurized mixture of chemicals, water and frac sand (silica) into the underground shale and rock formations. This forces out the natural gas and oil by cracking open the rock.

While fracking was first used in the 1940s, the practice increased starting in the 1990s in places like Pennsylvania, Michigan, the Dakotas and Texas. According to the Energy Information Administration, 45 percent of all U.S. gas will come from fracking by 2035. Thanks to the ability to drill horizontally and new developments in the process that use more water, chemicals and sand, even more gas can be released from shale in more than 1 million U.S. wells.

The chemicals used in fracking include acids, detergents and other chemical poisons, all of which are exempted from federal laws and few of which are disclosed to the public. Together, these chemicals create a toxic cocktail, which could cause major damage if it were to seep into wells or groundwater supplies. For beginning farmers, or those wishing to leave a living legacy, these are heady considerations.

Additionally, the extraction process often involves the release and burning of methane, another potent gas compromising air quality. Some wells require 1 to 8 million gallons of water, with less than half of the fracking water recovered, which should raise eyebrows as to fracking’s long-term viability.

“One major issue is the disposal of frac water that is not recycled,” says Jack V. Matson, an environmental engineer and expert on industrial water contamination. “It contains high levels of salt brine from the underground formations along with natural toxic and radioactive dissolved minerals. These wastewaters often find their way into streams and rivers that serve as drinking-water supplies.”

True. Fracking has opened the spigots and reshuffled the deck of options for potentially lower-cost fossil-fuel-based energy in the U.S. The United States has turned the energy-related carbon-dioxide emissions clock back to 1994, according to the Energy Information Administration, in part thanks to a widespread shift from coal to natural gas. But that doesn’t mean we’re out of the environmental hole.

“Although natural gas burns cleaner and more efficiently, it leaks from pipelines and production equipment,” Matson says. “Also, excess gas is flared into the atmosphere. Natural gas per molecule is 20 times more potent as an insulator than an equivalent molecule of carbon dioxide, adding to its climate-change potential.”

Besides the hundreds of thousands of jobs that have been created thanks to the fracking boom, many rural landowners and farmers have landed lucrative oil and gas leases. According to Forest Jahnke, co-coordinator of the Crawford Stewardship Project, some farmers in Wisconsin with loads of frac sand under their topsoil have been offered checks worth, in some cases, more than their property value. After the sand has been hauled away, the topsoil is returned on top.

“Farmers, many of whom have heard very little about frac sand mining, are being approached and are being sold a lie that once the miners are done and the land is nicely flattened out, they will be able to go right on farming on that land,” Jahnke says “Once you remove the filtration system of the earth—the sandstone—and have piled the topsoil in a heap for years, destroying the tilth and natural biota in the soil, you’d be hard-pressed to grow so much as a crop of soybeans.”

Information can be tough to come by, too. Getting a farmer with these leases to share their experiences can be tough because gag orders can silence participating farmers. Not to mention, few people like to talk publicly about their personal finances.

Caution to the Wind

While fracking could be done without causing damage to the environment or threatening human health, numerous examples have surfaced exposing its harmful and destructive impacts. Due to fracking’s industrial nature, quiet country roads now bustle with activity, as trucks come and go from well-lit drill sites. Equally troubling is the jump in earthquake activity in many parts of the country.

As for the regulatory oversight by government, in many cases, the companies involved in such fracking activities are exempted from health-related issues, diminished property values or contaminated well water. Some states allow testing of sites to be completed by the drillers. In Pennsylvania, for example, drill operators are simply required to inspect well integrity quarterly and keep the results available for state inspectors.

While there have been tens of thousands of wells where fracking has taken place, verified and documented complaints are less comprehensive. Few farmers have the financial means to hire geologists, toxicologists and lawyers to document damages, turning personal experience or hearsay into the scientific evidence that our current legal system demands.

“Most farmers just don’t have the financial resources to easily protect themselves legally against fracking pollution from oil and gas operations on or near their land,” says Patrick Sullivan, a spokesperson for Californians Against Fracking, a statewide coalition that includes the California State Grange and many individual farmers among its members. “Prevailing in court against a company that’s contaminated your water or your air can be expensive. You need deep pockets to hire geologists, toxicologists and lawyers to document damages. And you’re going up against one of the richest industries in America.”

While it can be difficult for farmers to take legal and environmental action to protect themselves from fracking, one thing is for sure: Fracking issues will continue to dominate town-hall meetings, debates and headlines thanks to the ambiguous nature of the process and amount of money to be made from this modern-day oil and gas boom. Beginning farmers need to know if the land they are farming or looking at buying is in a fracking area, and how that will affect their future endeavors.

“All too often, you can’t count on state regulators to protect air or water from contamination by oil and gas operations,” Sullivan says. “One almond farmer here in California had to personally videotape a company dumping fracking fluid into an unlined pit before regulators would act. Staying alert to what companies are doing in your area is important, and so is talking to regulators and lawmakers about the problems you’re experiencing.”

To stay abreast of fracking activities where you live, follow websites like FracTracker.org and The Center for Public Integrity (keyword “fracking”).