What To Do If Your Goat Has A Rare Disease

When an animal is suffering, the cause can sometimes be uncommon. Here's what you should do if your goat is diagnosed with a rare disease. 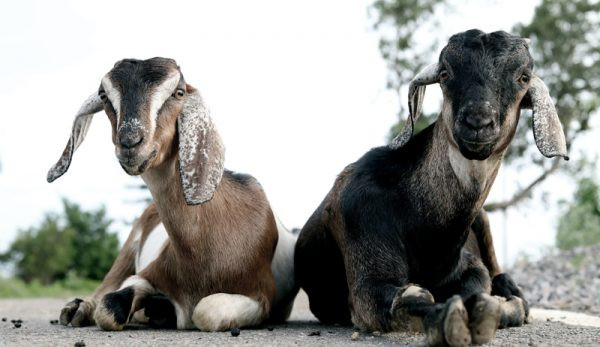 Six years ago, Candace Rice purchased Zeus as an addition for her small farm in Silex, Missouri. The then 6-month old Angora goat joined her herd of horses and donkeys. Not long after bringing the kid home, she noticed that his urine had tinges of red and brown mixed in.

She called her veterinarian, who first thought the condition was a urinary tract infection or a urinary calculi (solid particles were in the urinary system). The first step was bloodwork and antibiotics.

But when Zeus didnâ€™t improve and the test results were inconclusive, Rice knew she needed additional help. So she reached out to a university veterinary center.

â€śIf you don’t seem to be getting anywhere with your local vet, get to your nearest university veterinary center as soon as possible,â€ť she says.

Read more: Are you considering getting goats? There are numerous reasons to bring some home!

Additional bloodwork and bone marrow aspiration, a procedure that draws out the soft spongy tissue inside the bones, revealed Zeus has an auto-immune disorder called autoimmune hemolytic anemia. The disease is rare for a goat.

â€śThe auto-immune disorder kills most of his red blood cells before they get to his bloodstream,â€ť she says. â€śWhat we thought was blood in his urine was actually the pigment of destroyed red blood cells.â€ť

The vet prescribed prednisone, a corticosteroid that is used in people and other animals to treat conditions ranging from blood disorders to arthritis, allergies, immune system disorders, breathing problems and more.

â€śNow that he’s on prednisone, he rarely has an episode of pigment in his urine. And we haven’t been able to pin down a cause when it does happen,â€ť Rice says. â€śThe last time was when we sheared him in the spring. So, possibly stress brings it on. But he had no reaction (no urinary pigment) when we sheared him this fall.â€ť

One of the big challenges to caring for Zeus is that not much research has focused on hemolytic anemia in goats and itâ€™s difficult to pinpoint the exact cause.

An episode may be triggered by ulcers, blood disorders, certain types of toxins, a lack of certain trace elements, vitamin B12 deficiencies, autoimmune disorders and chronic disease.

Read more: Here’s what you need to know before adding goats to your farm.

Rice describes Zeus generally as a hard keeper. The medication instructions direct to give it with food, but there are days he turns his nose up at all food. She keeps a variety of grains in the feed room and has options ranging from straight oats and straight barley to rolled options of both, prepared grain and timothy pellets. And she even offers split peas (which are high in iron), sugar beets and sunflower seeds.

â€śThereâ€™s a lot of back and forth when he turns his nose up at his regular ration,â€ť she said.

Because goats are grazers and her pastures are mostly grass, she trims oak and willow branches from around the property or cattails by the lake and brings them back. Select herbs from the garden are also occasionally on the menu.

Rice sees caring for the goat as a labor love and admits that one of the biggest challenges is the lack of research on the rare disease. Although it can be difficult caring for a goat with a rare disease, she says the best approach is monitoring his condition.

â€śAs with any animal, closely observing behavior so you know what’s normal and what isn’tâ€”from changes in appetite to quantity and quality of urination and defecationâ€”is key,â€ť she said.