What To Do With A Fallen Nest

If you find a fallen nest, use this opportunity to get to know your feathered friends a little better. 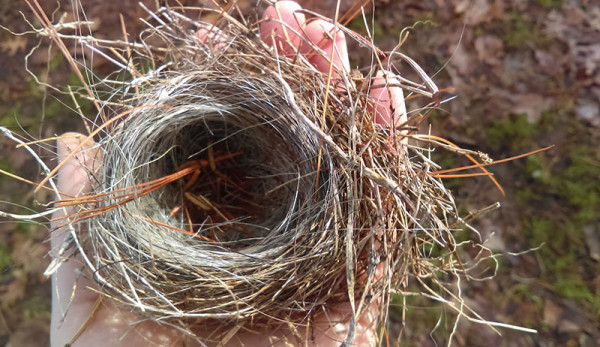 March has blown in like a lion here in Central Kentucky where I live. Some areas took the brunt of 70 to 100 mphÂ wind gusts. A wind half that strong could knock a birdâ€™s nest out of a tree, no matter how ingenious the avian architect. If you find a fallen nest, use this opportunity to get to know your feathered friends a little better, investigating the nestâ€™s structure, size and building materials. Subtle differences reveal clues to the bird species.

There is a simple and easy online guide created by the Cornell Laboratory of Ornithologyâ€™s NestWatch to narrow down the options of whose nest you have discovered. It’s best if you can tell where the nest fell from, such as a high tree limb or a low-growing shrub. Itâ€™s also a good time to get to know the differences between your migratory and non-migratory birds. Year-round residents tend to build their nests in early spring, whileÂ migrants arrive a little later as the weather warms up.

If you find a nest on the ground, it’s possible that it was actually built there. Eastern towhees, spotted towhees, song sparrows, dark-eyed juncos, Townsendâ€™s solitaires, nighthawks, brown thrashers and killdeer nest on the ground among brush, tall grass, tree roots, gravel or right out in the open.

The nest pictured above fell from an oak tree. It was small and compact yet very light and incredibly soft inside. As I searched through the options of common birds, I found six possibilities to match this nest. I could easily eliminate one of those six, the rose-breasted grosbeak, because its loosely-constructed nest is so sparse that it can barely contain its eggs. A more likely builder would be one that lines its nest with soft fibers, such as the American goldfinch. It generally uses the soft seeds of milkweed and thistle for the fluff that will cushion its eggs. The nest I found appeared to be lined with horsehair from the nearby barn, which would also be a nice insulating material.

The second foundling nest was slightly more distinctive yet unidentifiable: a hefty bowl of dried mud with a grassy exterior. European song thrushes make nests like this, but they donâ€™t live in North America. While I would love to believe it belongs to a wood thrush, one of my favorite songsters, it could also be an American robinâ€™s nest, which is in the thrush family. They use their breast to pack down the mud interior of the nest walls. I am still perplexed and would love to learn what bird makes such a solid, earthy home.

This one is easy. Thereâ€™s only one type of bird in the Eastern U.S. that makes a pendulous nest like this: the oriole. In the west, you’ll see the Bullockâ€™s oriole and in the east, the Baltimore oriole. Suspended from two branches, the nest hangs like a sock and consists of random knots and tangles reinforced with lightweight fibers. The female constructs the nest in three phases, beginning with the outer lining, and then bringing in grasses to thicken the woven tube, and finally lining it with soft animal fur or feathers. The one I found must have blown out of the tree during the initial stage, asÂ it is still very delicate and thin. Orioles often use plastic from feed bags in their architecture, as seen here.

Even nests that seem to be abandoned or destroyed might still be in use or be useful. Birds can rebuild again with those already-gathered materials. After you have photographed it and examined it, return it to where you found it. Use your best judgement about propping a nest back up in a tree or bush; if it is a precarious position maybe itâ€™s better to leave on the ground so it doesnâ€™t blow out again. Some birds reuse nests, thoughÂ many will rebuild a new nest every year. Donâ€™t be too concerned about the scent of your hands repelling nesting birds because they donâ€™t have a keen sense of smell.

Of course, a nest with eggs or chicks in it requires a careful response. If there are unhatched eggs, you can try to replace the nest near where it came from but make it more secure by using a berry basket and tying it to branches so it doesnâ€™t fall out again. The best, although most difficult, response is to do nothing, and stay away. Hovering nearby to watch and see if a parent is tending to the bird will only keep the parents away. Do not try to feed or give water to a bird. If you suspect there are injuries, contact your local wildlife rehabilitator.