What To Look For When Bringing Home Baby Chicks

Whether you're buying baby chicks from a farm store or a hatchery, or you're brooding your own, look for these signs to spot health troubles in your birds. 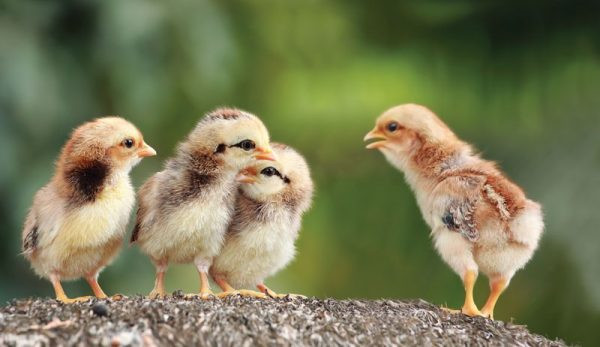 When you walk into your local feed mill or farm-supply store during the spring, you‚Äôll likely hear the cheep, cheep, cheep of baby chicks. Those little balls of fluff are adorable! But it‚Äôs important to resist the cute factor and focus on health to ensure your new flock or additional flock mates survive.

Picking healthy chicks isn‚Äôt difficult when you know what to look for‚Äîfrom their peepers to their feet.

Normally, once you buy and remove a chick from a store or breeder‚Äôs facility, you won‚Äôt be able to return them. If a chick has any health issues, you‚Äôll have to deal with them.

That makes it important to know more about a chick‚Äôs background.

‚ÄúFind out what NPIP clean or monitored testing they do and for what diseases. Make sure it‚Äôs from a closed flock and that the breeder works with a vet.‚Äù

Read more:Check out these additional pointers for starting your first flock.

When asked about purchasing from local feed mills or farm-supply stores, Pitesky says reputation matters. ‚ÄúSee if they get chicks that are part of NPIP and what biosecurity practices they use,‚Äù he says.¬Ý

Amber Baum, a Louisiana backyard chicken-keeper, confidently recommends her local farm-supply store for purchasing chicks. She bought all 12 of her chicks for her first flock there. They‚Äôre all alive and doing well.

‚ÄúI only intended to get 10 females altogether,‚Äù Baum says. ‚ÄúI wanted five Barred Rocks and five Golden Comets. It worked out pretty well for the GCs since there were only five of them left.

“As they got my BRs, I realized there would be just two left alone. Since everyone says you should get a couple ‚Äòjust in case‚Äô chicks‚Äîbecause inevitably one or more chicks usually don‚Äôt survive for one reason or another‚ÄîI took the remaining two Barred Rock chicks.

“I still have a flock of 12. Apparently, I had a healthy batch of babies and absolutely no need for any ‚Äòjust in case‚Äô extras!‚Äù

If your chicks are coming from a clutch of eggs that you‚Äôre hatching yourself, you‚Äôll already have the background information. However, there are steps you should take to ensure you hatch healthy chicks.¬Ý

‚ÄúHatching eggs from younger breeding birds usually produce healthier chicks,‚Äù Pitesky says. ‚ÄúMake sure the breeding birds are healthy. This includes having a good appetite and being alert and responsive. Ideally, all fertile eggs that fail to hatch should be examined to detect patterns of mortality.‚Äù

Many people have success purchasing their chicks from a professional hatchery. Unless the hatchery is close to your home, they‚Äôll be delivered through the mail. The downside is you won‚Äôt be able to pick and choose the chicks that appear healthiest.

However, professional hatcheries typically comply with strict state and federal regulations and inspections. Like buying from breeders, check to see if they have NPIP certification. This further proves a commitment to operating a high-quality facility that produces healthy stock.

Healthy chicks are alert and active, but new hatchlings will sleep quite a bit the first days.

‚ÄúThey will spend a lot of time running around the brooder pecking at their new surroundings but will pause to take several small power naps throughout the day,‚Äù according to Meyer Hatchery.¬Ý

While babies sleep more than adults and may completely sprawl out when they‚Äôre catching a good nap, they should wake up relatively quickly when they‚Äôre disturbed.

Lethargy is an obvious early warning sign there‚Äôs something potentially wrong with a chick. This is especially true if a chick can‚Äôt stay awake, including when it‚Äôs standing up. If you touch a sleeping or lethargic chick and it barely responds, or doesn‚Äôt respond at all, it‚Äôs probably not healthy.

‚ÄúIf you‚Äôre buying chicks, a chick that‚Äôs lethargic, laying down and allowing itself to be trampled by other chicks should be avoided,‚Äù Baum says. ‚ÄúSomething is almost certainly wrong with a chick that can‚Äôt even get up to get out of the way of its brooder mates.‚Äù

Melissa Rice, a backyard hobbyist with a small backyard flock in Edgewood, Kentucky, said that besides lethargy, you should also avoid chicks that ‚Äúaren‚Äôt eating or drinking well. Combs and wattles may be too pale in appearance, which also can be an early sign.‚Äù

Other chicks may avoid a sick one, so a chick that‚Äôs isolated from the others may be unwell. You may also notice this chick swaying with its eyes closed, which is another bad sign.

When choosing chicks, take your time and observe their behavior. Any prolonged inactivity or unchick-like behavior should be suspect.

Read more: New to chicken-keeping? It’s time to get acquainted with your farm supply store.

From Beak to Feet

Starting with the beak, look closely to see if it‚Äôs broken or crossed over. Chicks with beak issues may have problems eating and drinking. This can hamper their survival.

However, don‚Äôt be surprised if the tip of the beak is missing. Hatcheries will often snip off the tips to prevent chicks from peaking at and potentially harming each other.

Also, some chicks suffer from crossed or scissor beak. This beak deformity prohibits the bird from closing its mouth properly and makes it difficult to eat and drink.

‚ÄúThe beak should be well matched with the top and bottom,‚Äù Rice says. ‚ÄúYou don‚Äôt want an overbite appearance.‚Äù

Looking beyond the beak, a chick‚Äôs eyes should be bright, not cloudy or dull, and it should be well aware of its surroundings. If it has droopy or sleeping looking eyes or its eyes are crusted over or closed all the time, then something is probably wrong.

Traveling over the chick‚Äôs body, take note of its feathers. Only older chickens during molt should be missing feathers. Chicks shouldn‚Äôt be missing any feathers.

A dehydrated or malnourished chicken or chick will have feather loss and/or dry-looking feathers.¬Ý

‚ÄúFeathers should be in a rowed appearance, lying flush to the body with a healthy sheen,‚Äù Rice says. ‚ÄúTail feathers should point up. There shouldn‚Äôt be any bare spots or damaged feathers showing.

Look at the Legs

Finally, a chick‚Äôs feet and legs should be straight, allowing it to stand tall. While splayed legs or crooked toes don‚Äôt necessarily mean the chick is unhealthy, it could indicate an underlying problem that may or may not be fixable.

Some deformities may be corrected with special attention, so it‚Äôs up to you whether you want to take a chance on a chick with irregular feet or legs.

Chicks with an unabsorbed yolk sac can have enlarged doughy abdomens.¬Ý

It‚Äôs not unusual to see a string attached to a chick‚Äôs ‚Äúbelly button,‚Äù especially in the first 24 hours of life. Leave it alone and never pull it, or you risk pulling out the chick‚Äôs intestines.

This string will eventually dry up and fall off.

Know What the¬ÝHuddle Is About

Huddling is frequently just a sign that chicks are cold, but sometimes it can be a sign of sickness. Pay attention if a chick stays under the heat lamp continuously, while other chicks run around, routinely moving to and from the heat lamp.

‚ÄúChicks huddle for warmth or comfort,‚Äù Rice says. ‚ÄúChicks that are healthy will alternate periods of huddling under heat lamps with periods where they seek play or investigate their surroundings.

“Too much huddling, ruffled feathers and not getting out and about can indicate illness.‚Äù

Chicks have a vent, which is a small opening on their fuzzy butts. The vent acts as the exit point for bird poop. Eventually eggs come out of this opening, too.

Vents should be clean. But a condition called pasty butt causes droppings to stick to the vent area and prevent the bird from pooping. Pasty butt is common in new chicks, especially because of stress from shipment or fluctuating brooder temperatures.

However, left untreated, pasty butt can lead to death.

‚ÄúA normal vent is flush to the body with no redness, swelling, protrusion or irritation,‚Äù Rice says. ‚ÄúThere shouldn‚Äôt be any sign of manure stuck to it, indicating pasty butt, or any sign of infestations, such as lice or mites.”

Most chicks that don‚Äôt survive due to stress, dehydration or injury during transport typically die within the first 24 to 48 hours. This can include traveling between a hatchery and a local feed or farm-supply store, from a local store to your home or through the mail.

When contemplating a chick purchase at a local store, ask the clerk in charge of the chicks when they received them. Besides travel-related issues, there are other reasons a store-bought or home-hatched chick might die in the first 24 to 48 hours.

Rice says some of the top reasons include:

They can also pass from poor thermoregulation due to over or under heating the environment of the brooder after hatch.

Temperature and stress play a big role in the very beginning. Chicks aren‚Äôt fully feathered, and they can‚Äôt regulate their body temperatures.

If the brooder isn‚Äôt warm enough, the chicks will get too cold and die.¬Ý

A vaccine is recommended on the first day of a chick‚Äôs life to prevent Marek‚Äôs. However, the vaccine takes about four to seven days for it to start protecting them. Chicks are still vulnerable if exposed.

Marek‚Äôs is highly contagious and often fatal, so always confirm any chicks you purchase have been properly vaccinated. Many hatcheries recommend and offer the Marek‚Äôs vaccine because the disease is easily spread.¬Ý

Rice recommends the Merck Manual as a good recourse for chicken ailments, prevention and management. If you‚Äôre concerned about the health of a newly acquired chick, have it checked out by a vet familiar with fowl if you don‚Äôt already have one you use.

This article originally appeared in the March/April 2021 issue of Chickens magazine.