What To Watch For When Checking Cattle On Pasture

After cattle are turned out onto pasture, it's important to do regular check-ins while providing feed and minerals to watch for common conditions in need of treatment. 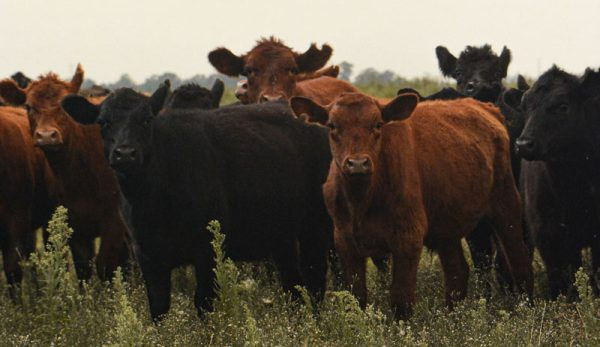 â€śIs he blind?â€ť I quizzed curiously.Â â€śIâ€™m not sure. He might have gotten poked by a tall piece of grass,â€ť my husband answered from the driverâ€™s seat on one of the first trips out to the pasture to check the newly turned-out cattle.Â

We somewhat haphazardly bounced through the rocky parts of a Flint Hills pasture in the late afternoon. We carefully counted the random bunches of cattle, watching for any injuries or ailments that might have popped up since they were turned out a few days earlier.Â

The pickup was loaded with multiple sacks of mineral, picked up from a local feed mill. We distributed this at the various mineral feeders stationed throughout the pastures.Â

We put out this mineral via a medicated feed made specifically for cattle on pasture. It helps to encourage good weight gain and keep the herd healthy. Some of the ingredients used in one particular blend of mineral feed include calcium, salt, magnesium, potassium, copper, cobalt, iodine, zinc and a variety of vitamins.Â

Read more: Minerals are important, but be careful when providing them to livestock.

We check the cattle throughout the summer, usually at least once a week. Sometimes itâ€™s a fairly quick trip out there; other days it seems to take forever to get the right count. Even if youâ€™re off by just a couple, thatâ€™s reason enough to necessitate a drive through the whole herd again and to search until you find the strays.

They might have been down in a draw by themselves or just tucked in the shadow of another steer.Â

When we finally reach the right count, we drive through again and look at each animal to see if anything out of place catches the eye. To a less experienced person, the cattle can all look the same. â€śYep, four legs and a tail! Looks great!â€ť

But to the seasoned cattlemen in the truck, just a cloud in the eye, change in the gait, or strange look to the manure can raise a red flag.Â

While we arenâ€™t going to discuss how to treat all of these ailments, weâ€™ll at least run through some of the most common ones we find in our cattle out in the pasture.

You can sometimes tell that a steer has an eye issue by their behavior. If theyâ€™re blind or the eye really bothers them, they will sometimes go off by themselves, away from the rest of the herd.

My brother-in-law, Kordell Krispense, explained that the eye might weep and the steer will generally hold his head out and turn the injured eye upwards towards the sky. Sometimes he will even squint.

If the eye has more of a cloudy look and isnâ€™t weeping, itâ€™s generally scar tissue from a past injury that you see.Â

Pinkeye is another condition that can plague cattle. This bacterial infection of the eye can be spread from cattle that already carry it to others in the herd, often via flies. While usually treatable, it can cause inflammation and, in some cases, even temporary or permanent blindness.

If one steer appears to be infected with pinkeye, treat it quickly before it spreads to others in the herd.Â

Read more: How to protect and treat cattle against pinkeye.

Depending on the severity of the injury, limping can be one of the easiest things to spot as you drive through the pasture. Some cases might be due to a steer rough-housing with another steer and pulling a muscle or staining himself. Other times it could stem from foot rot or an infection.

This will usually cause the foot (and possibly leg) to swell up. Stepping on a hard rock can also cause issues, as well as going from standing on soft ground in a pen to harder ground in the pasture.Â

As my husband, Kolton, later explained, diarrhea can be caused by a variety of things including:

We check the rear ends of the cattle as we drive through to see if any manure looks strange, raising a red flag.Â

At times you will come across a steer that won’t gain much weightâ€”if any. Weight loss is not a good sign when cattle are out on grass and indicates something is seriously wrong with the animal.

If it’s lame, injured or even just has a bad eye, the animal might not want to graze as much and will become thinner than the rest. Internal worms can also cause thinness.Â

Sometimes cattle might need a mineral supplement or just simply increased access to good pasture grass. Donâ€™t wait until cattle become thin to take them off grass. If theyâ€™re still out in the pasture and starting to look thinner, you waited too long.Â

When we go out to check cattle, we also keep an eye on a few other things in the pasture, such as:

Checking in with your herd often will ensure that you catch things quickly and can get on top of any problems before they turn into major catastrophes!Â