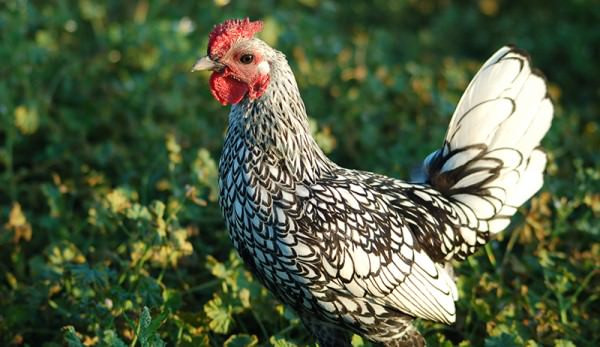 If you’re new to chicken keeping, you might not be familiar with bantams yet, but they’re not too complicated to understand. As Karen Unrath, the American Bantam Association secretary, explains, they’re basically miniature chickens.

“Many bantams were bred from their large-fowl counterparts,” she says. “Examples include the Plymouth Rock, Rhode Island Red and even the Brahma Bantams. However, many bantams, often referred to as true bantams, have no large counterpart. These are beautiful ornamental birds bred hundreds of years ago, many in Europe and the Far East. These include the Rosecomb Bantam, Japanese Bantam, Belgian d’Anver Bantam, Sebrights and many more.”

The bantam standard recognizes 63 breeds and 415 varieties. The variety of a breed is the recognized color or color pattern of that breed. For example: Sebright bantams are recognized in two varieties, Golden and Silver. Bantam breeds are divided into seven classes:

Bantams certainly have some advantages over their full-sized counterparts. They consume less feed, so are cheaper to keep and create less waste, and they take up less space, making them great for small backyards and urban environments. They can also be easier to handle due to their small stature, which is especially good for young people and the elderly, and they have big, fun personalities.

Their eggs are smaller: It usually takes two bantam eggs to equal one regular egg in a standard recipe. And while most breeds aren’t typically raised for meat, they still have a function beyond laying eggs, according to Unrath: “They are all dual-purpose—eggs and pleasure!”

The ABA has been around since a small group of bantam breeders split off from The American Poultry Association in 1914 to form the Chicago Bantam Club, later renamed and reorganized as the American Bantam Association. The organization celebrated its 100th Anniversary Centennial show in Columbus, Ohio, in November 2014.

“It was a great show with more than 10,000 birds exhibited,” Unrath says. “It was three full days of events, judging and lots of great people to chat with.”

Most ABA sanctioned shows also have a youth show with separate recognition prizes; sometimes the youth compete with the adults. Some youth shows have such a large junior turnout that they sanction the junior shows separately.

“The junior movement in the poultry show world is growing each and every year,” Unrath says. “We are very excited about this and hope this trend continues.”

Unrath believes the trend is rising due to the relatively inexpensive nature of showing chickens (as opposed to larger livestock), the smaller size and easier-to-handle nature of bantams and the number of suburbanites opting to keeping small flocks in their backyard these days.

“The world of show poultry is very inviting,” she says. “It welcomes new and interested kids easily, and it’s a natural fit to many 4-H programs. You don’t have to be the fastest runner, strongest jumper, best speller or have off-the-charts SAT scores to excel in the showroom. You do have to have patience, a good eye and understanding of your breed, a game plan for keeping your birds in condition and a little luck.”

In addition to sanctioned shows and the annual, the ABA has been offering seamless leg bands since the early 1970s. These plastic leg bands are individually numbered, permanent and put on young birds. Each year, the bands are inscribed with the current year. “They are extremely helpful to the serious breeder and even the backyarder who wants to be able to know the age of his birds forever,” Unrath says. “The ABA has all the numbers registered. If a person purchases a bird with an ABA leg band, we are able to let the person know who originally purchased the band, which is very helpful when working on the breeding program.” Currently, the ABA dispenses more than 25,000 leg bands annually.

Anyone can join the ABA and showing your birds is easy, once you get started. Membership dues are $25 per year or $70 for three years. All members receive three newsletters per year plus the annual ABA yearbook, which is a huge resource. Also, at the poultry shows, you will meet many ABA members, and “once an ABA member,” Unrath says, “you will likely stay as long as your bird interest remains.”

If you’re thinking of adding bantam breeds to your flock for the first time, go with a trusted breed. Here are the top-10 most popular bantam chicken breeds registered with the ABA: