How long does a chicken live? If cared for properly, chickens can have a lifespan of a decade or more, producing eggs for much of that time. 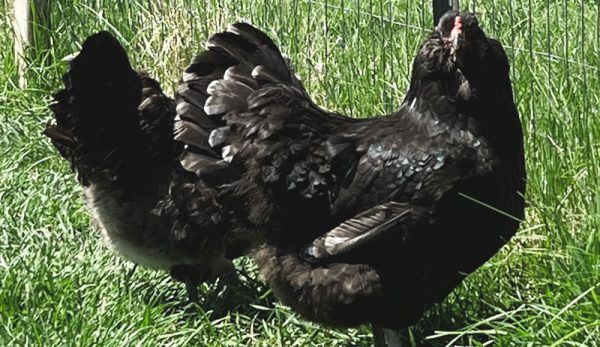 The weather has been somewhat wacky this spring: 80 degrees and sunny, then 30 degrees and snowy, often in the span of a single day. I should therefore not have been surprised to discover eggs in our nest boxes back in March, a good two months before our girls usually start laying. I shared a photo of our first tinted egg of the season on our social media, along with an image of Natalya, the 3-year-old blue Silkie whoâ€™d laid it.

A flurry of likes ensued, along with comments praising the little Silkieâ€™s beauty. Amid all the praise, I spied a starkly different comment: â€śSheâ€™s gorgeous! Too bad youâ€™ll have to kill her soon.â€ť

A commonâ€”and distressing!â€”misconception that some new backyard flock owners have is that hens are only useful until they are 3 years old. Once theyâ€™ve reached this landmark age, their production plummets and their value zeroes out. When your chickens have reached the end of their lifespan, so itâ€™s best to euthanize them or use them for soup.

As shocking as this misbelief may be, itâ€™s easy to understand where it comes from. Most commercial egg farms keep their layers until the hens reach 2 to 3 years of age. Once their laying stock reaches this age, commercial farms generally dispose of their hens, refreshing their flocks with pullets just past point-of-lay.

Because of this commercial practice, those new to chicken-keeping often assume itâ€™s also standard operating procedure for backyard flocks. They couldnâ€™t be more wrong.

While itâ€™s true that a henâ€™s egg production begins to decline after age 3, it is by no means over. With a proper diet, plenty of fresh water, sufficient natural light and a safe living environment, a layer can continue to produce eggs for five to 10 years.

She may only lay an egg every couple of weeks, but sheâ€™ll sing her egg song as proudly and loudly as the yearlings.

Read more: Chickens can make a lot of noise. Here’s a quick guide to what they may say.

Many factors affect the lifespan of a chicken. Poor nutrition plays a key role in a henâ€™s longevity. If not fed a layer ration specifically formulated with the percentages of protein and calcium needed for proper egg production, a hen will draw these building-block nutrients from her own bodyâ€™s reservoirs, directly impacting her health.

Similarly, continual egg production can negatively impact the lifespan of chickens. Even if fed a nutritious layer ration, daily or near-daily production exhausts and depletes a hen, causing caged-layer fatigue. Allowing laying hens to rest and recuperate during the shorter daylight months can help extend their lives.

Other factors that affect a henâ€™s lifespan include a safe, clean living environment; poultry illness and parasites; the presence of predators; and the type of chicken she is.

Production hybrids will typically have a shorter lifespan than dual-purpose and heritage breed chickens.

Read more: You can keep the eggs going in winter with some supplemental light.

How Long Can Hens Live?

Given a safe, clean and stress-free living environment, with winters off to rest and replenish their bodies, and plenty of nutritious food and clean water, hens can live as long as eight to 10 years … and quite possibly longer. According to the Guinness Book of Records, the record for worldâ€™s oldest chicken is held by Muffy, an American Game bantam who died at the age of 22.

Natalya, being only 3, hopefully has many years ahead of her. She has homegrown inspiration: She shares a coop with Butters, our Spangled Orpington girl, who hatched here on June 30, 2015, and will be 7 next month.

Our grand dame, Dolly Ameraucana, lives in the next coop over. Dolly will be 10 this June, and she is every bit as spry as her daughters Harriet and Laetitia, whom she laid and hatched at the ripe old age of 6.