What’s That Foam On My Plants?

Do the plants on your farm look a little frothy? Blame it on the spittlebug. 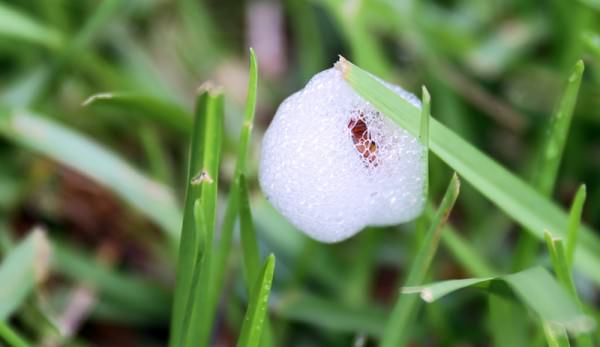 As a child, I was fascinated by the frothy white masses commonly found on the strawberry plants in my parent’s garden. I investigated every one of these bubbly spit-like anomalies to get a glimpse of the strange green or yellow creatures that called them home. The insects that captivated my childhood imagination are known as spittlebugs, an insect closely related to leafhoppers.

Immature spittlebug nymphs and their spittle homes are a common sight in many late-spring and early-summer gardens and yards. The foam is formed when the nymphs munch on plant sap and secrete the excess moisture. The function of this spittle is three fold. It:

The spittle masses can get up to 3/4 inch large and tend to occur at the junction between the leaf and stem. Once the spittlebug nymph matures, it stops producing spittle and ventures out in the wide world in search of a mate and more plant sap.

Adult spittlebugs have triangular-shaped bodies about 1/4 inch long and come in a wide variety of colorations based on the species. The adult is often called a froghopper due its hopping locomotion and its unique face, which reminds many gardeners of frogs.

So What’s That Spittle Doing To My Garden?

There are 20 to 30 spittlebug species found throughout North America. The good news is that most of these spittlebug species are not interested in consuming your vegetable garden, though there are a few pest spittlebugs species, like the meadow spittlebug, that could affect crops like strawberries, legumes and some grains. Unless spittlebug populations are very high, the damage caused by their feeding is no big deal. While feeding nymphs can distort the strawberry fruit and leaves, plants likely won’t die even though productivity could go down. Also, while spittlebugs are capable of spreading bacterial and fungal plant diseases, they’re not that good at it, so you don’t usually have anything to worry about.

Kicking Spittlebugs To The Curb

When dealing with spittlebugs, the simplest organic control is through physical removal of the insects either by hand-picking or spraying water on all visible spittle masses. If populations grow out of hand and become troublesome, consider trying an organic insecticidal soap spray that is rated for spittlebugs—but be aware that the nymphs are rather well protected from chemical agents in their spittle dwellings.