What’s the Deal With Grassfed Meat?

We shed some light on the grassfed versus grain-fed debate so you’re no longer left in the dark. 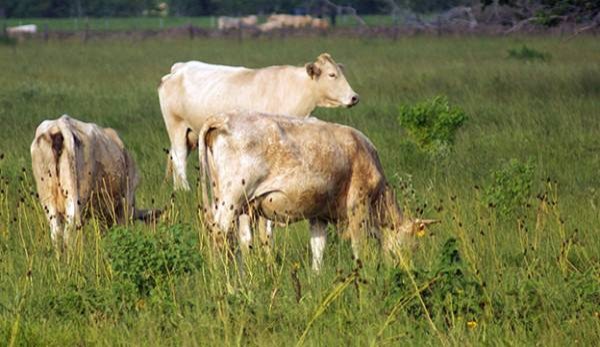 If you’re a sucker for controversy, you’re probably well aware of the grain-fed versus grassfed debate. Farmers in both camps are passionate and base their opinions on what seems to be pretty solid research. Let’s explore a few of the issues that get tossed around when it comes to feeding livestock. The talking points fall roughly into two categories: the effect of grain on ruminants’ health and how grain-fed/grassfed meat affects consumers.

For ruminants, grass and grain are not equally digestible foodstuffs. The four-compartment stomachs of cattle, sheep and goats are uniquely equipped to process the fiber and nutrient content of forage. The rumen—the first station for grass, hay and browse—contains millions of beneficial bacteria and protozoa, which produce enzymes that combine with saliva to break down the fiber. Once the rumen is full of partially chewed boluses of fiber, the animal finds a spot to lay or stand while it regurgitates these cuds one by one, grinding the now-softened fiber before swallowing it once more.

From the rumen, the chewed food moves into the reticulum. This honeycomb-like structure catches any larger chunks of food or foreign objects the animal may have swallowed, such as gravel, hardware (found in hay more often than you’d expect), or whole grains that are too large to pass to the next compartment, the omasum. This third chamber has multiple folds and removes much of the moisture out of the ruminated fiber and continues to absorb nutrients. The next and final stage before passing into the small intestine is the abomasum, which functions much like humans’ stomachs, using hydrochloric acid and enzymes to break down the food particles still further before they pass into the intestinal system.

Great, you say. Now we know more about ruminating than we really wanted to. But hang in there—this is where the grass vs. grain debate finds its first strong case.

Unless grain is somehow tangled up in fiber, it does not get formed into cuds to be brought up and ground down to the size that can be digested well. Therefore, if you feed whole grain to your ruminant, you’ll see a fair amount of it again in their manure. Yes, some nutrients will have been extracted, but grain in manure is pretty much wasted money.

So does grinding the grain help that problem? Well, sort of. While this makes more nutrients available as the grain passes through the digestive tract, giving you more bang for your buck, there’s another, bigger issue with what happens to your ruminant on grain: acidosis.

Grain has little fiber, which as we’ve learned, a ruminant’s stomach is particularly attuned to digesting. Normally a ruminant’s copious saliva, created as the animal chews its cud, helps maintain the correct pH balance in the rumen. Because low-fiber grain doesn’t come up in cud to be re-chewed, not as much saliva is produced and the high-carb content of grain acidifies the system. Depending on how much grain is fed, a whole set of health problems can result.

Assuming that you can head off grain-induced bloat (which can lead to suffocation and death as the animal’s expanding rumen compresses lung capacity in some cases), the rumen itself can become inflamed. When that happens, its ability to absorb nutrients drops and ulcers develop. This rumenitis allows the escape of bacteria from the rumen into the bloodstream, ultimately causing liver disease and abscesses. Beef producers treat or manage these conditions and others brought on by high-carbohydrate, low-fiber diets with antibiotics and other medications, but as long as the animal is fed a grain-based diet, its health will be at risk. Plus, traces of the medication are left in the meat—the meat we eat!

A Case for Grain

So why even bother with grain if it compromises the animal’s health and the meat is less healthy than its grassfed alternative? Well, for one thing, weight gain on grain is significantly higher. The Dickenson Research Extension Center found that feedlot steers gained 4.07 pounds per day while the control group of pastured steers gained 2.80 pounds. That is 1.27 more pounds a day when on grain, reducing animals’ finishing speeds.

Due to government subsidies, grain is cheap feed, so you get a big weight gain at a lower cost. We’re talking economics here, and health and economics make poor partners. DREC went on to note that the difference in weight gain would be less for animals that are on pasture receiving grain as an addition to forage, but that said, cost per pound of meat is often the bottom line—at least for feedlot beef—and beef prices per pound to consumers are actually less than they were 40 years ago due to grain subsidies.

All Meat Is Not Created Equal

As we’ve heard multiple times before, grassfed beef tends to be lower in overall fat content, an important consideration for those consumers interested in decreasing fat consumption. However, this difference in marbling has a corresponding difference in tenderness, a hurdle some just aren’t willing to jump over.

However, it’s important to keep in mind that healthy animals produce healthy meat, and as we saw earlier, ruminants on a grain-based diet are not as healthy as their grassfed counterparts. Not only do their systems become acidified and livers often compromised/abcessed, their health is managed by medications and other compensations that aren’t necessary when the animals receive the forage-based diet they’re accustomed to digesting. As long as they are introduced gradually to grain, extreme cases of bloating are usually prevented, but ruminants don’t ever really adapt to grain, though they’ll eat it like the candy it is. At best they cope, but that does not remove the fact that acidosis caused by high-carb diets produces meat that reflects the less-than-healthy diet and management methods.

So for heaven’s sake, why would anyone eat meat from less-than-healthy animals? It boils down to this: They like the taste. Because the emergence of large-scale feedlots aided by tax-subsidized corn and soy, the general public has grown used to the taste, texture and smell of grain-fed meat. Meat from grassfed animals can be less tender and differ in taste and smell, and that is because it is actually different chemically. In their 2010 study on nutritional differences between grass and grain fed cattle, California State University-Chico found that research spanning three decades supports the argument that grassfed beef has a more desirable saturated fatty acid lipid profile as compared to grain-fed beef.

“Grass-finished beef is also higher in total CLA (C18:2 [Conjugated Linoleic Acid]) isomers, TVA (C18:1 t11 [Trans-Vaccenic Acid) and n-3 FAs.[Fatty Acids]. This results in a better n-6:n-3 ratio that is preferred by the nutritional community,” the study states. “Grassfed beef is also higher in precursors for vitamin A and E and cancer fighting antioxidants, such as GT and SOD activity, as compared to grain-fed contemporaries.”

Advocates of grain-fed meats and adherents of grassfed, more naturally grown meats don’t hesitate to paint each other in the worst of colors. I’ll bow out of that debate. Hobby farmers aren’t going to operate on the level of the feedlots, and may only be growing meat one animal at a time. A bit of grain now and then isn’t going to be a huge issue any more than a periodic doughnut binge is for a human. Just remember that the higher the grain content, the more acidic the system becomes, and this leads to unhealthy animals, possible medications, and less-than-healthy meat.