Wheelbarrows: One Wheel Or Two?

Some wheelbarrows have a single wheel while others have two. Both offer advantages and disadvantages, but which is right for you? 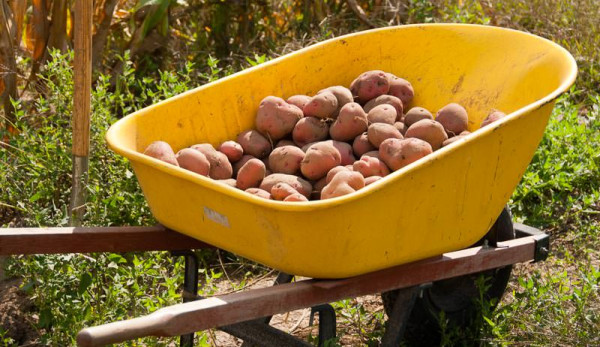 Every farm needs a wheelbarrow (if not multiple wheelbarrows), and I think this fact is pretty much indisputable. Theyâ€™re invaluable for transporting a variety of supplies and materials, including manure, firewood, dirt, leaves, branchesâ€”you name it. They’re even better if you add some extra featuresÂ or modify them for a specific use!

Of course, not all wheelbarrows are created equal. In fact, one factor in particular can have a significant impact on the strengths and weaknesses of a given wheelbarrow, and that is the number of wheels that it uses.

The question is which will work best for you? In all likelihood either type will serve you well, but I have found that the two types are distinctly different in the way they perform. Here are a few of my thoughts on their advantages and disadvantages.

Iâ€™ve found that the main advantage of having one wheel is maneuverability. A single-wheeled wheelbarrow is a versatile tool that can easily make tight turn and maneuver into small areas, making it ideal for tasks that require working in tight quarters.

On the other hand, with only one wheel to support the load, this type of wheelbarrow relies on you to provide balance during movement, making the wheelbarrow less steady and harder to use when weighed down with heavy loads. A single-wheeled wheelbarrow is best used for smaller loads.

Having an extra wheel for balance can make all the difference when transporting heavy loads. BecauseÂ the wheelbarrow wonâ€™t be trying to lean to one side or the other, you can focus your energy on lifting the back end and providing the pushing power without fear of the wheelbarrow tipping over.

Having two wheels also means that these wheelbarrows can be moved in one-handed fashion. Even if youâ€™re only holding one handlebar, there will still be three points of contact with the ground.

The tradeoff is that two-wheeled wheelbarrows are less inclined to make sharp turnsâ€”they definitely show a preference for traveling straight and require a bit more room to easily negotiate a turn. This makes them a little trickier to use in small areas, but this might be outweighed by their superiority at transporting heavy loads.