Chickens, especially older ones, can develop cataracts, leading to blindness and difficulties. Here's what you can do to help vision-disabled birds in your flock. 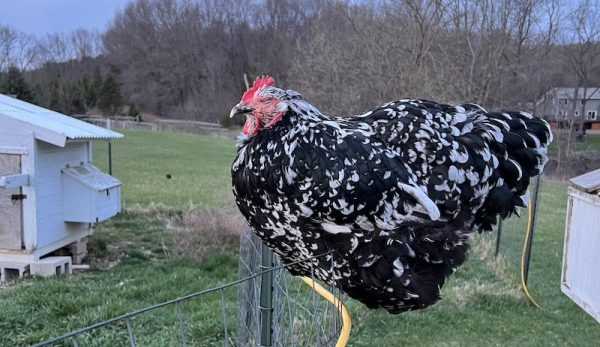 It happened within a matter of weeks. In April, Butters Orpington was a bright-eyed biddy, sunbathing beneath her runâ€™s daisy patch and chasing butterflies around. By early May, she refused to leave her coop.

I wasnâ€™t sure why sheâ€™d be so hungry at duskâ€”or why sheâ€™d stopped perching on the roost, opting instead for a nest box. I chalked it up to older-hen idiosyncrasies â€¦ until my son Jaeson noticed something odd about Buttersâ€™ eyes: they seemed clouded over.

Could Butters be suffering from cataracts?

Cataracts (in chickens as well as people and animals) are a clouding of the lens of either one or both eyes. A healthy lens is clear and permits light to pass through the eye to the retina, where images are processed. Cataracts block light from passing through the eye, either partially or totally.

As a result, blindness occurs. Cataracts are one of the leading causes of blindness in older humans. They can also affect animals such as dogs, cats, horses, rabbits and birds.

Exposure to continual lighting or ammonia can also lead to cataracts, as can a nutrient-poor diet. Cataracts can also develop as a sign of old age.

While there are other causes of blindness in chickens, such as injury, infection and parasites, cataracts tend to stand out because of the milky, cloudy appearance of the afflicted eye.

If one of your birds starts being clumsy, continually bumps into things, seems confused about where she is, and becomes increasingly inactive, check her eyes. If her pupils seem enlarged or irregularly shaped or if you notice a discoloration of her eyes, she may suffer from cataracts.

Suddenly Buttersâ€™ reduced activity and her refusal to roost at night became crystal clear to me. She couldnâ€™t see where she was going.

Thatâ€™s also why I kept finding her under the daisies. Poor Butters couldnâ€™t find her way back to the coop entrance.

As Jaeson held her, I slowly moved my fingers by her eyes. Butters did not respond. As a final test, I had Jaeson place Butters back inside the coop as I lifted the feeder off its stand. Butters dipped and pecked at the air, trying to connect with the absent feeder.

That convinced us. Butters was blind.

Since we feed our flocks nutritious layer rations, do not use artificial lighting and regularly clean our coops, we could only think of one cause for Buttersâ€™ cataracts: old age. Butters turns 7 on June 30th.

Read more: Check out these 11 grooming essentials to pamper your chickens.

A chicken (or chickens) afflicted with cataracts can lead a happy, healthy life with some modifications. First and foremost is to create a smaller run for her directly around her coop. A blind chicken will feel more secure and comfortable in an area that is familiar to her.

Vision loss can result in your bird becoming lost in a larger run or while free ranging. This will cause her stress and leave her open to predator attacks.

Second, avoid rearranging the interior of your coop. Your hen counts on finding food and water in their accustomed places. If you notice that your hen is losing weight, she may not be finding her way to the feeder. You may need to gently dip her beak towards the food.

Third, make reassuring sounds and talk to her while you feed her and whenever you are performing coop maintenance, as this will alert her to your presence and prevent her from becoming startled.

Finally, be sure to keep an eye on the rest of your flock. Lower-ranked birds may take this opportunity to rise in rank by bullying and pecking your vision-impaired girl.

Butters and her flock have adapted beautifully to her new condition and living requirements. TJ, the coop rooster, is especially protective of Butters. Upon release every morning, he stands outside the coop door and clucks encouragingly until she joins him.

He then stays by her side, scratching and alerting her of any tasty treats he uncovers and otherwise shepherding her around the run.

Butters has started going in on her own now, too, instead of sitting out by the daisies, awaiting rescue. She now prefers to sleep in her favorite nest box. This past weekend, we found tangible proof that Butters is indeed content in spite her condition: a large brown egg in her nest box.

As the only brown-egg layer in the coop, Butters couldnâ€™t have given us a clearer sign that cataracts werenâ€™t going to slow her down.