When Do You Harvest Ginger?

Don’t think you have to live in a tropical location to grow this staple of Asian cuisine—with the right garden tools, you can harvest it anywhere. 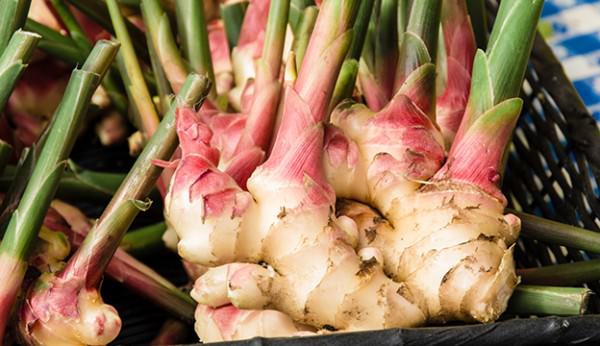 Ginger—that versatile, flavorful and healthful rhizome with beautiful, exotic foliage—is one of those plants that many gardeners look at and think, “Some day.” For as exotic as it looks, it’s actually not difficult to grow. Whether you’re farming 5 acres in Hawaii or keeping a container garden in Wisconsin, your “some day” can happen this year. You Hawaii farmers will have an easier ginger-growing venture because it is a tropical plant, after all, but anyone, anywhere can grow and harvest at least a little bit of ginger for himself.

Ginger is often referred to as “ginger root,” but it’s actually a rhizome that we plant and consume. Ginger’s full growing season is 10 months, but it can be harvested sooner for ginger growers in less-temperate climates. In its earlier stage, ginger is considered baby ginger, which has the same flavor and texture as mature ginger, minus the rough skin.

Planting ginger starts with rhizome seed pieces. You can buy these from certified disease-free growers in the U.S.—mostly Hawaii but elsewhere, too. You can even plant the ginger that you purchase at the grocery store if you just want to experiment in growing a few pieces for home use, but these are not certified disease-free, and you really don’t know what quality of stock you’re getting.

Bury your ginger seed rhizomes in a warm, moist place, such as in a growing medium in a greenhouse. If you live in a tropical climate, you can plant these ginger rhizomes outdoors at any time after shoots emerge. For gardeners in most of the U.S., when shoots emerge, plant the ginger rhizomes in a greenhouse, high tunnel or hoop house in the spring. These structures help create the tropical environment ginger is looking for, especially if you live in a humid area and can close up your tunnel tight.

If you want just a few rhizomes for home use and aren’t concerned about yield or size, plant rhizomes in a partially shaded pot (at least 15 inches wide) or garden after the soil has warmed. Give ginger a place that gets plenty of light but no direct sun and where it is protected from the wind.

Cut ginger rhizomes into 1- to 1½-inch pieces—each with at least one sprout—letting the pieces heal a day or two before planting, suggests the University of Florida Institute of Food and Agricultural Sciences Extension. Plant the ginger rhizome pieces 6 to 8 inches apart at the bottom of a 1-foot furrow. Cover them with 2 to 4 inches of soil with the sprouted bits pointing up.

According to the Hawaii Cooperative Extension Service, you should plant ginger in loose, deep, well-drained soil. Keep the pH on the acidic side—5.5 to 6.5. Amend ginger’s soil with compost to improve the soil organic matter before you plant. As the ginger grows, use the additional soil from the furrow to hill it about every four to six weeks. This will encourage the ginger rhizomes to grow up rather than just across. Ginger likes consistent (but not heavy) watering—particularly later in its growth, when both the ginger foliage and the ginger rhizome are growing.

You can actually start harvesting ginger at four months, but just a little piece of rhizome at a time. You definitely want to harvest all of your ginger before your first freeze. If you live in a zone that allows a full 10 months of growing season, harvest when the leaves are yellow and the stem falls over. Harvest by hand using digging forks, wash under running water—it’s tricky to rinse the dirt out from the cracks and crevices, and you’ll have to break apart the rhizome to get it all—and allow the ginger pieces to air-dry before storing or selling.

Save back some rhizomes to replant next year. As long as these rhizomes are kept at 55 degrees F or higher, they should still be viable next year.

Ginger has insect, fungus and bacterial concerns everywhere it grows.

A few pathogens to know include:

Your local cooperative extension can be a resource for recognizing and dealing with plant-disease issues that are common in your area.

When Does Ginger Flower?

Ginger rhizomes send up tropical-looking foliage that grows up to 3 feet tall. Culinary ginger will flower when it is 2 years old, but this doesn’t help its culinary value. If you’re looking for a flowering ginger for your garden, go for an ornamental variety. Still, ginger does not grow as a perennial in climates that experience freezing weather, so if you’re growing ginger with the hope of flowers and you’re not in a tropical place, you need a means of bringing the ginger indoors in the winter.

Trim off the ginger foliage that will yellow and fade in winter. Water the soil about once a month so the ginger rhizome stays alive. In the spring, begin setting your ginger container outside again for a few hours a day after the overnight temperature rises above 55 to 60 degrees F. Increase the time outdoors over a period of five days, and then leave it outside for the season.

Repot your ginger every two years or so with fresh soil and amendments.

Your “some day” ginger harvest can happen this year with the right seed pieces and soil amendments to make them grow.