Gathering dried hay by hand and storing it loose is still a viable strategy in the absence of modern equipment, so heed this tale if trouble arises. 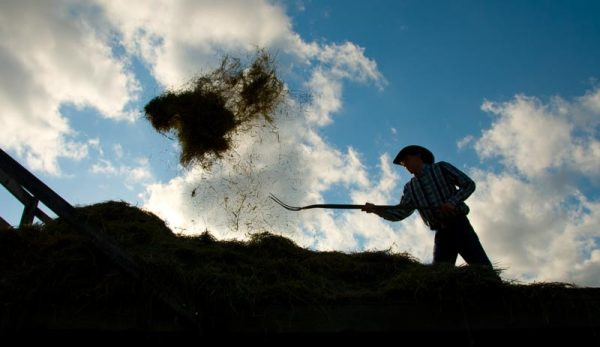 Once upon a time, a long time ago (wellâ€”actually not that long ago), farmers produced hay without the modern miracles of mower/conditioners and hay balers. It might seem hard to imagine nowadays, but there was a time when farmers gathered dried hay by the pitchfork, heaping it onto wagons before storing it loose in haystacks or in barns.

The invention of the automatic hay baler sped up the process and eliminated a lot of manual labor. But you know what? Gathering dried hay by hand and storing it loose is still a viable strategy in the absence of modern equipment.

I learned this during a recent stretch of hay production.

Read more: Which is better for you, a square or round hay baler?

Machinery Can (& Often Does) Fail

It was supposed to be a routine little mission, capitalizing on a three-day sunny stretch to produce approximately 220 small square bales. Things started off on a fine note. The mower/conditioner did its job. The hay rake gathered the loose hay into windrows. And the square hay baler started churning out bales.

Suddenly, without warning, there was a tremendous crash and clanking. Something (we still havenâ€™t pinpointed what) caused the complicated innards of the hay baler to crumple upon themselves. A service door flung open, spraying broken parts out the back in a cloud of hay dust.

The loss of the hay baler was a blow. But we were prepared with a backup hay baler.

We quickly hooked it up, and the second baler produced exactly 14 bales before getting sidelined with a shear pin issue. Restoring the shear pin (and tightening a nut on the flywheel that somehow worked loose) took far longer than it should have. By late afternoon, though, we were back on track.

Unfortunately, our baler issues werenâ€™t over. While the backup baler successfully baled up much of the hay, there was still a meaningful amount on the ground when a spring broke on the knotter. This caused bales to burst forth untied from the back of the machine.

The knotter chewed up a messy tangle of twine.

By this time we were running out of daylight. We called it a night and regrouped the next day. With afternoon rain in the forecast and both balers in varying states of disrepair, we elected to gather the remaining hay the old-fashioned way: by hand.

Read more: Upgrade your hay wagon for easier use!

Thatâ€™s right. Armed with pitchforks and three empty wagons, four of us ventured forth and began scooping up as much hay as we could. We used the window of dry time between the departure of dew and the arrival of rain. The fact the hay was gathered in fluffy windrows made the pickup quicker and easier than gathering unraked hay would have been.

In the end, a downpour struck before we could rescue all the hay. But we got a great deal under cover before the rain and considered the day a success.

I was impressed with how quickly could gather hay by raking the windrows into piles with pitchforks and hoisting giant armloads onto the wagons. To load as much loose hay as possible, we compressed the hay using a large and heavy piece of plywood.

Later, with the help of a neighbor, we were able to repair and untangle the knotter on our backup baler. We shouldnâ€™t have to gather hay by hand again anytime soon. But itâ€™s good to know pitchforks, wagons and muscles can successfully step in if needed, just as they did with regularity in the not-too-distant past.