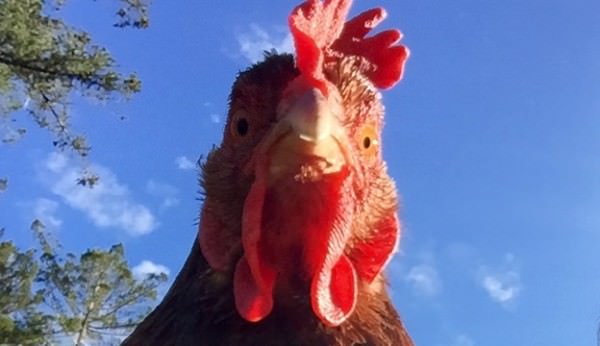 So awhile back, I related the sad tale of my girl Peanut, who was getting picked on by the rest of the flock after an incident that tore her comb, giving her a bloody head and making her the target of much pecking and rude remarks by the other hens.
I took full responsibility for her injury and subsequent shunning, and spent many days protecting her from the rest of The Girls and apologizing profusely. Now, six months or so later, her comb has healed into a fashionable flopped-over style, and all of her feathers have grown back. She’s fully reintegrated into the flock and things seemed to be going well—until she decided to hate my guts.

I hand-raised all my chickens, giving each an even amount of cuddling and TV-lap time. Up until The Incident, Peanut was as snuggly as the rest, climbing into my lap if I was outside reading or following me like a puppy.

When The Girls are out foraging and I come out into the yard, they generally all run in my direction, hoping for treats or at least some attention. All, that is, except for Peanut. Oh, she runs in my direction all right, but I believe it is with murderous intent. She pecks aggressively at my feet and legs, and puffs out her feathers in a most threatening way. If I try to pick her up for a cuddle (an activity she previously enjoyed, or at least tolerated), she bites and pecks my arms and glares at me in a contemptuous manner that reminds me a lot of my freshman year English teacher. When I put her down, she puffs up and charges at me.

I have to say, my feelings are a little hurt. I thought we had bonded during her convalescence, but apparently she was merely masking her resentment until she no longer needed my protection, biding her time until her status in the flock was reinstated, If chicken society included any kind of legal system I am pretty sure she would have filed a lawsuit; instead, she’s settled for attacking me at every opportunity.

Apparently, “chicken resentment” is actually a thing. Turning, as I do, to cyberspace for answers, I found a number of cases where previously happy hens suddenly turned vindictive and ferocious, following stressful incidents such as introducing new birds to the flock or being forced to wear Halloween costumes or Santa hats.

There’s hope on the horizon, however. Suggestions ranging from giving the cranky bird some preferential, affectionate treatment to pinning it to the ground in a forced bow all sound promising. Some interwebbians theorize that she’s decided I’m below her in the pecking order, hence the vicious behavior. Taking actions such as holding her upside down or pressing her to the ground may help.

But I think I’ll start with the preferential treatment, which will at least allow me to assuage my guilt for my part in her injury that started this whole mess. If that doesn’t work, I’ll switch to domination. But first, it’s going to be cookies and cuddling, which history has proven to be an optimum conflict resolution practice, at least at our house. For example, no one even cares anymore about the “why can’t we stay up all night watching cat videos on YouTube” argument, but everyone remembers the butterscotch oatmeal raisin cookies.