When Life Gives You Lemons, Give Back 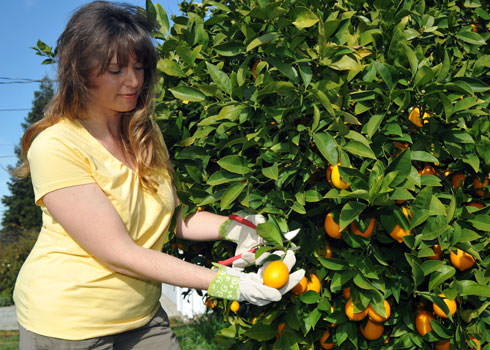 Californian Anna Chan (aka the “Lemon Lady”) harvested more than 2,000 pounds of fruit in her first 30 days of neighborhood foraging. After collecting unwanted fruit and other produce from trees and farmers’ markets, she donates her harvestÂ to local food pantries.

Talk about a low-hanging fruit opportunity. Looking for a way to decrease waste, connect fresh food to those who need it most, stir up a gardening revolution and stimulate conversations in her community, Anna Chan had to look no further than her neighborâ€™s unpicked fruit tree. The Robin Hood of unwanted fruit, Chan is known for picking extra fruitÂ from trees in her Concord, Calif., neighborhood in the Bay Area and delivering the fresh produce to area food banks strapped by increasing demands. Unlike that guy in green tights, stealing fruit never crossed Chanâ€™s mind. All she needed to do was knock on the door and ask.

Technically, Chanâ€™s one-woman mission to connect local unpicked fruit with those in need erupted in early 2009, thanks to her daughter Avaâ€™s fussiness.

â€śShe only calmed down and fell asleep when I drove her around our neighborhood,â€ť recalls Chan, a stay-at-home mom. â€śI saw all these lemons and oranges falling to the ground because the homeowners werenâ€™t harvesting them. I couldnâ€™t stand seeing all that waste when I knew there were people right in our own community unable to afford fresh, nutritious fruit.â€ť

Â Rather than just drive by and look at opportunity through the windshield, Chan decided to do something about it. Realizing the odds of catching someone at home were low, she created a simple, heartfelt letter volunteering to pick their unwanted fruit and personally deliver it to the local food pantry. A self-described shy person, Chan mustered courage and dropped off the letter at that first home.

â€śI immediately received a positive response from that first letter, which quickly grew into a string of homeowners I regularly stopped at to harvest and donate their fruit,â€ť Chan explains. â€śThe first 30 days, I harvested over 2,000 pounds of fruit with hardly any effort at all â€” fruit that would have other- wise fallen to the ground and rotted.â€ť

Quickly grew, indeed: In the first year alone, Chan gleaned more than $90,000-worth of unwanted produce, sowing seeds of inspiration throughout her community.Â

â€śIt wasnâ€™t hard to do,â€ť explains the modest Chan with a smile. â€śWhere I live, you can walk five minutes in any direction and find a fruit tree.â€ť

Citrus works particularly well for Chanâ€™s foraging efforts, as it stores well for up to a week without additional refrigeration.

Chan quickly earned her local honorary title of â€śThe Lemon Lady of Concord,â€ť often seen harvesting area trees with Ava, now 3 years old. Foraging fruit trees opened Chanâ€™s eyes to other gleaning opportunities. She realized she could increase her harvest by working with growers at area farmersâ€™ markets, offering to pick up their excess produce at the end of market and bring it to the area food pantry.Â

â€śAll I did was ask. The response from farmers has been incredibly generous,â€ť she adds.

This initial contact quickly grew to aÂ network of farmers Chan connects with regularly at the market, always personally asking them if they might have some excess and abundantly thanking them for their donation.

â€śThe farmers need to be treated with respect and gratitude at all times,â€ť Chan emphasizes. â€śWe need to remember that without the farmer, there wouldnâ€™t be any food, period.â€ťÂ

Chan exudes this attitude of gratitude as she makes her rounds at the Tuesday farmersâ€™ market in Concord. She looks more like a woman attending a family reunion than the recipient of the Jefferson Award, a prestigious national recognition honoring community and public service. She greets each farmer by name and gently asks if they want a box in case they have extra produce to donate at the end of the market. While Chanâ€™s efforts may cumulatively add up to high-harvest totals, she clearly makes each individual grower a priority, asking questions about how the recent rains are affecting his crops or how his family is doing.

Chanâ€™s â€śLemon Ladyâ€ť title is a bit ironic, as she doesnâ€™t have a tart bone in her body. People gravitate toward her sweet energy like bees to honey. As she walks down the farmersâ€™ market aisles, Chan receives a tsunami of warm and welcoming greetings from farmers and other market growers. This pied piper of produce exemplifies how electrifying it can be to connect with a personal, passionate mission. Folks canâ€™t help but want to be around her and support her vision.

The donations from farmers help diversify her fruit gleanings with other seasonal items like apples and greens. Food vendors at the market will also donate extra prepared food, like noodles or bakery items.

Chan returns to the farmers at the end of the market to pick up the donation boxes, piling them high in the back of her vehicle and delivering them as soon as she can to local food pantries.

â€śPeople are sometimes surprised that an affluent suburb like Concord even has a food bank,â€ť Chan adds. â€śBut wherever you live, particularly in todayâ€™s economy, there are people who canâ€™t afford fresh, healthy produce.â€ťÂ