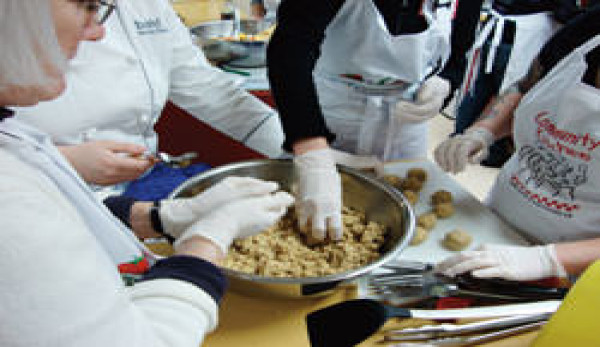 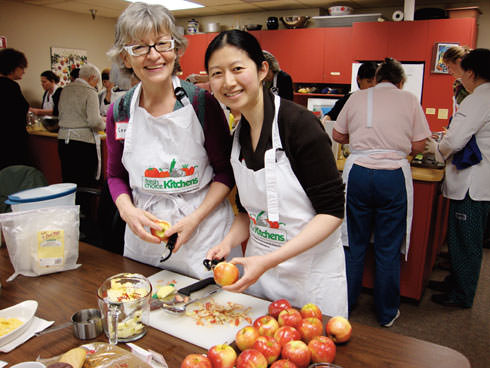 Community kitchens can work in small spaces by using some creative solutions. Here, a table near the kitchen is being used to prepare apple crisps.

When Daniela Geleva arrives in the industrial kitchen on the campus of Seattle Pacific University in Seattle, Wash., the stainless steel countertops are piled high with boxes of apples and bunches of rhubarb. Within hours, a small group wearing green aprons and wielding kitchen knives has chopped the fruit and greens and mixed a topping of brown sugar, cinnamon and lemon zest. The aroma of fresh rhubarb-apple cobbler fills the air.

With dessert in the oven, the group begins noshing on salad and made-from-scratch asparagus-leek-and-potato soup. ŌĆ£To see the transformation from raw produce to a fulfilling meal is very empowering,ŌĆØ Geleva says.

Though it looks like a home-economics classroom, the cooks in this kitchen are not students earning credit for their efforts. Instead, this group of Seattle residents has come together as members of a community kitchen to cook, share a meal and connect over their commitment to fresh, local foods.

If you are interested in starting a community kitchen in your neighborhood, Diane Collis, program manager of Fresh Choice Kitchens, a Canadian nonprofit organization providing resources and support to community kitchens throughout North America, offers these suggestions:

CALL A FIRST MEETING: Explain the purpose of a community kitchen, and solicit feedback from prospective members about their interests. Will it be a vegetarian kitchen? A kitchen focused on raw foods? The first meeting is also the time to brainstorm where to hold your community kitchen (community centers, churches and high-school home-economics classrooms are good choices) and decide the best dates and times for meetings.

DECIDE ON RECIPES AND GROCERIES: Scheduling a second meeting to prep for the first community kitchen will give the group time to choose recipes, prepare grocery lists and plan shopping trips. Be sure to choose recipes that meet the needs of the entire group and are simple enough to prepare without expensive ingredients or special kitchen equipment. When choosing recipes, keep cooking times in mind, and remember not to overbook the stovetop or oven!

CREATE A FINANCIAL PLAN: The group needs to decide how to handle community-kitchen finances. Some groups will agree to bring a set amount of grocery money each time they plan recipes and grocery lists (keeping in mind the budgets of their members). The designated grocery shopper(s) collects the money in good faith to purchase supplies. If money is leftover, it can be put into a kitty to offset the cost of more expensive recipes or used to purchase supplies, such as knives and cutting boards.

START COOKING: After youŌĆÖve secured a space, decided on recipes and completed the shopping, itŌĆÖs time to come together to prepare a meal. Divvy up the tasks (itŌĆÖs a good idea to assign a small group to each recipe), review the recipes and dive in!

EVALUATE: After a few cooking sessions, ask participants for feedback about the process and tweak as necessary.

Community kitchens unite foodies who want to cook, share meals and support local farmers with their neighbors. Members often meet at local farmers markets or food co-ops to shop for fresh produce before heading to kitchens in schools, church basements and community centers to prepare and share meals.

ŌĆ£A community kitchen is a place for people to get together to share skills and cook from scratch,ŌĆØ explains Diane Collis, program manager for Fresh Choice Kitchens, a nonprofit organization in Vancouver, British Columbia, Canada, that provides resources and support to community kitchens throughout Canada and the United States.

Fresh Choice Kitchens, arguably the largest community-kitchen resource in North America, is aware of 335 community kitchens operating in British Columbia alone; Collis estimates that the actual number of kitchens in the province easily triples that.

The modern community kitchen got its start in Lima, Peru, in the late 1970s, after drastic cuts to public food subsidies, according to a United Nations Research Institute for Social Development paper, Gender and Urban Social Movements (Lind and Farmelo, 1996).

Currently, the movement has spread to Canada and the U.S. Pacific Northwest. Elsewhere in the United States, the term often refers to soup kitchens or other community food programs that serve the poor. Overcoming the perception that community kitchens offer handouts to those in need has been a struggle, according to Collis.

Engaging with the community was one of the reasons Geleva started participating in community kitchens in 2010. ŌĆ£I love to cook, but itŌĆÖs a lot more enjoyable to cook in community,ŌĆØ she says. 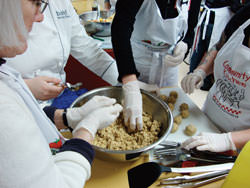 Many hands make a main course of tofu meatballs ŌĆö a quick and easy recipe that is suitable and adaptable for gluten-free diets.

Stocking the refrigerator with healthy dishes that she cooked in the community kitchen was an added benefit for Geleva. ŌĆ£You can go and cook for a few hours and have food for an entire week,ŌĆØ she says, noting that most groups prepare enough food to allow members to take leftovers home. ŌĆ£That was appealing to me.ŌĆØ

In fact, the entire community-kitchen model appealed to Geleva. After participating in several community kitchens, she decided to start one at SPU, where she is an associate professor of food and nutrition.

Like most community kitchens, the SPU kitchen, which launched in April 2011, focuses its monthly sessions on preparing dishes made from seasonal, locally sourced produce; ingredients are chosen with cost in mind ŌĆö there is no truffle oil or foie gras on the menu ŌĆö and the dishes can be easily recreated at home with basic kitchen equipment. While the group, which ranges from four to 22 participants, slices, dices, stirs and simmers, relationships form across stovetops.

ŌĆ£The food is a big draw, but people come back to community kitchens for the relationships,ŌĆØ says Rachel Duboff, who began participating at Wallingford Community Kitchen in Seattle in 2009. ŌĆ£While soup is simmering, people are getting to know one another. Community kitchens are social events.ŌĆØ

While the focus is on cooking with seasonal produce and sharing a communal meal, the kitchen often hosts special events or plans themed menus, such as Dumplings from Around the World and a ŌĆ£canning kitchen,ŌĆØ which focused on food preservation. Duboff believes that adding an educational component to some of the kitchens helps keep participants engaged.

ŌĆ£Everyone has a different reason for being there,ŌĆØ she explains. ŌĆ£Some people want to escape the isolation of eating alone; others want to learn new recipes and skills. Some members have a lot of experience in the kitchen, and others are new to cooking.ŌĆØ