Which Should Come First: The Chicken Or The Egg?

Farmers are taking a stand, saying that the quality of chicken’s lives affect the outcome of their eggs. 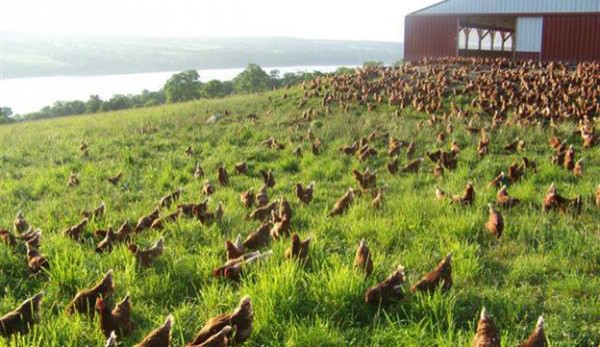 We’ve all heard the saying, “What came first, the chicken or the egg?” But what should come first? As we’ve seen in large-scale farms, the desire to produce as many eggs as possible overshadows the need for quality care of the hen, especially if income is a huge factor. As many small-scale producers are beginning to see, though, the quality of the hen should come first in order to produce the highest quality egg.

The Alexandre family is one that believes the chicken should come first. Ten years ago the Alexandre parents “visited a Mennonite farm where the owner had used a flock of laying hens to teach his children business principles and instill values like responsibility and care for nature,” New York Times reports. They then took the same idea home to their own farm, Alexandre Family EcoDairy Farms, and told their two sons, Christian and Joseph, that they were in charge of keeping 150 chickens alive. After just five years, the boys were in charge of 1,500 hens and were set to supply eggs to Whole Foods stores in their area.

With chickens outnumbering cows 10 to 1 on the farm, they will produce about 5 million eggs this year, which are currently being sold for up to 53 cents each. These eggs, dubbed Alexandre Kids Eggs, are pastured, meaning the hens “live in housing that allows them to spend much of the day in open pasture,” New York Times reports.

Handsome Brook Farm’s Betsy Babcock told New York Times, “What we’ve seen over the last year or so, though, is a revolution, with pastured eggs going from being a niche-y segment in the natural food market and Whole Foods to being a thriving business in places like Kroger.”

The problem for consumers, however, is the labeling. Because there are no federal regulations dictating how terms such as “pastured” should be used on egg cartons, each farm has its own definition. “Pastured” can mean egg-laying hens have access to large areas or perhaps just a small corner of land. Consumers, then, must do their homework. The Cornucopia Institute is updating its Organic Egg Scorecard (an egg rating system) to clarify terms on egg cartons.