Photo by Rick Gush White asparagus is mostly grown in Germany, but I can find it here in Italy just fine. One of the things I love about the Internet is that it is full of lies, but it is also a great place to do research. So good, that I’ve gotten rid of all […] 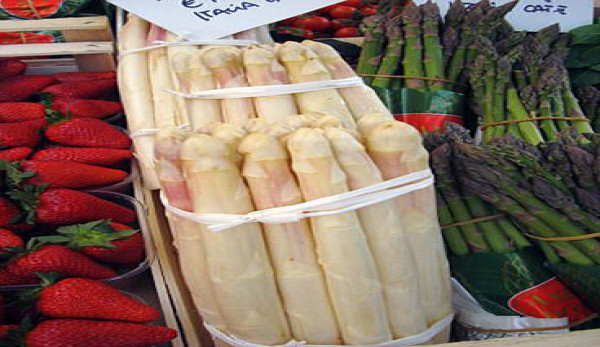 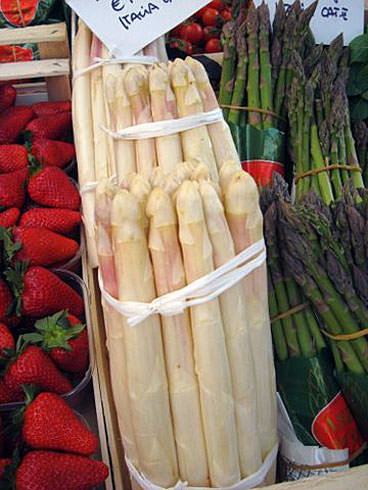 White asparagus is mostly grown in Germany, but I can find it here in Italy just fine.

One of the things I love about the Internet is that it is full of lies, but it is also a great place to do research. So good, that I’ve gotten rid of all the thousands of agriculture reference books that I had spent decades collecting. But the net has more copiers than original information sources, and a great deal of the information on there is sullied by this rampant practice.

Because of the fact that the stems on white asparagus are very bitter, the stems must be peeled before consumption. And since the stems need to be peeled, the white asparagus varieties place a particular emphasis on extra-thick stalks. Most of the green varieties have considerably thinner stalks, and would be inappropriate peeling candidates.

Asparagus crops are somewhat like carrots in that they prefer very sandy soil because of the lower soil pressure (It can be pushed aside with less energy.) allows the developing asparagus stalks grow easier in diameter and height. Harvesting is also much easier in a sandy soil.

In Germany, which is probably the country where the most white asparagus is produced and consumed, the farmers often use a clever two-sided piece of plastic — one side black and one side white — to shade the heaped-up asparagus beds. When the weather is cool, the farmers turn the black side up because the black side will heat and transmit heat down to the developing asparagus shoots. When the weather is hot, the farmers turn the plastic over, so that the white side is up, which will reflect heat away from the soil and keep it cooler. Simple and clever, but labor-intensive, since turning all the plastic in a big field can take hours.

There are also some good things on the Internet. For example, here’s a link to a video showing a bit of spargel (white asparagus in Germany) harvesting and processing. http://www.youtube.com/watch?v=8FkL75vcJdo

One of the really amusing things about the net is that one can find him or herself scattered about here and there. While doing a bit of search engine browsing before writing this blog I stumbled across an old article I wrote for Hobby Farms magazine back in 2003 and completely forgot about. Luckily, I don’t sound like an idiot, and the article is actually a fairly good summary of asparagus cultivation. Check out the article here.