Who Has Been Munching On Your Potato Plants?

The potato stalk borer could cripple your potato crop, so nip it in the bud before it becomes a problem. 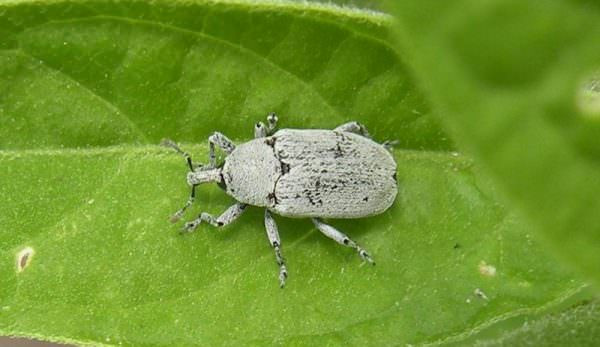 The potato stalk borer (Trichobaris trinotata) is a common native pest found in Mexico and in the eastern half of the United States. Unlike other voracious stalk borer species, the potato stalk borer is primarily considered a nuisance insect and, fortunately, not a major pest species in most regions. As the common name suggests, potatoes are their primary food source, the only major exception being its love for eggplant.

Potato stalk borer eggs are laid by adult beetles in the stems of host plants, such as the potato plant. The larvae emerge from the eggs and tunnel within the stem, often down to the root system, feeding while they excavate larger and larger tunnels as they grow. This excavation activity is where the major damage occurs, often killing the plant or lowering its productivity. Unfortunately, most of the damage from the larvae is not easily identified unless you visibly encounter a larva borer while removing dying plants. The larval form of the potato borer is legless and has a light white- to yellow-colored body and a brown head. The last instar of this pest will reach nearly 1/2 inch long.

The adult form will later emerge to mate and feed on the vegetation of the host plant, leaving behind rather minor nondescript, irregularly shaped holes. Adult potato stalk borers are tiny gray, almost blue, beetles with three small, dark spots on the rear of the wing covers. The exterior of the beetles are covered in short, coarse hairs that lend them their gray coloration. They are classified as weevils and feature the classic weevil elongated snout. Adult potato stalk borers are pretty tiny, often only measuring 1/10 inch in length.

Because the potato stalk borer is not a major pest, there are no recommended sprays or treatmentsâ€”organic or otherwiseâ€”to control populations of these beetles. Like with many pests, good garden sanitation will help keep populations in check. Removing overwinter shelters, such as dead potato plants and debris and eliminate attractive wild host plants, such as horse nettle and other wild nightshades.