Why Do Beekeepers Smoke Their Hives?

When it comes time to do a hive check or harvest honey, a smoker will help calm the bees and protect the beekeeper from stings. 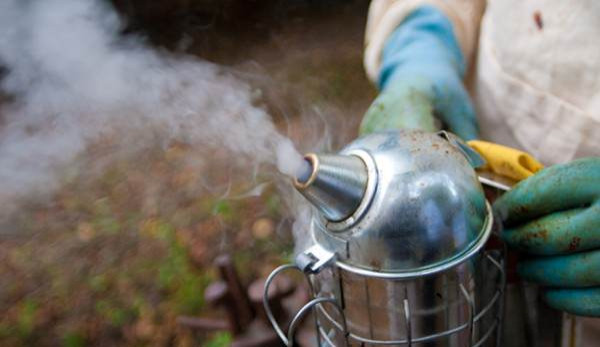 If youâ€™ve ever watched a beekeeper harvest honey, youâ€™ve probably seen him use smoke to protect himself while he harvests. Have you ever wondered exactly why this is? The reasoning is fairly simple: Bees will sting hive trespassers in self-defense, and the smoke will help you stay sting-free and keep the bees safe at the same time.

The Role of Smoke

One of the main reasons to use smoke when harvesting honey is to interfere with the beesâ€™ lines of communication.

That sense of smell is one of the main ways bees communicate. The alarm pheromone bees emit when they feel an imminent threat smells similar to banana oil, according to Shump. The colony is also similarly alerted when a bee stings you, increasing the likelihood youâ€™ll get stung repeatedly in the same spot. If you do end up getting stung, make sure to wash your clothing before approaching the hive again, as bees will smell the pheromone left on your clothing on future visits.

Smoking bee colonies also makes bees less likely to sting because they go into survival mode, making you less of a concern to them. “When bees smell smoke on the colonies, it makes them think the hive is going to catch on fire,â€ť Shump says. “Their natural reaction to this is to try and save as much honey as they can. If the hive is going to melt, theyâ€™re going to need to make a new one.â€ť

When the smoke enters the hive, the bees begin storing up as much honey in their bodies as possible in preparation to build a new hiveâ€”it takes 8 pounds of honey to make a pound of wax, which theyâ€™ll need in the construction. Once theyâ€™re full, theyâ€™re less apt to sting; stinging you will cause them to die, meaning the honey wonâ€™t make it to their new home.

The disruption caused by the smoke is temporary, so it wonâ€™t hurt the long-term health of your colony. Once the smoke dissipates, bees recover their pheromone sensitivity within 10 to 20 minutes.

How to Smoke a Hive

The traditional smokerâ€”a metal can with a hole on the bottom, with bellows attached and covered by a cone lidâ€”is the preferred method used by modern beekeepers. To use one, first, you need to start a fire. Fill the smoker with fuel material, such as pet bedding, wood chips or shavings, dead pine needles, or untreated burlap, and light with a grill lighter. Take care not to overfill, adding just enough that it will create a nice smolder.

“Once we get a bit of a fire going, weâ€™ll snuff out the open flame, and stuff more fuel on top of it,â€ť Shump says. “Weâ€™ll try to get the cinders burning. You donâ€™t want an open flame in your can because if you hit the bellows, they can become like flamethrowers, and you can melt the wings on the bees.â€ť

Once youâ€™re satisfied with the amount of heat and smoke being produced, return the lid to the smoker. Puff smoke around the hive using the tips below. When the smoker is not in use, keep it in a safe spot where itâ€™s not likely to start a fire. Puff it occasionally to keep the embers burning. Once youâ€™re finished with the smoker, extinguish it completely by dumping the fuel material in water.

Tips for Using a Smoker:

Smoking your hive shouldnâ€™t take more than a few minutes. To get the job done safely and effectively, use these tips from the University of Kentucky.

Understanding how to properly smoke a hive will help make your beekeeping hobby more safe and efficient. And as you know, soon enough, youâ€™ll be reaping the sweet benefits.

Get more beekeeping help from HobbyFarms.com: