Why Does My Chicken Have A Bruise On Its Beak?

Is your bird looking black and blue? A few different things can cause a bruise on the beak, but don't worry—it's common and typically clears up itself. 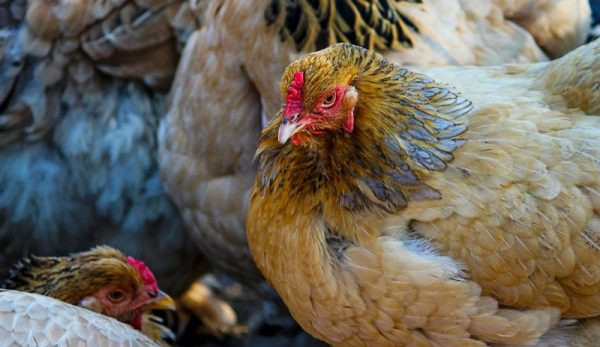 Sometimes, chickens can be just like children. One minute, they’re perfectly fine and happily running around the yard. The next minute, they’re sadly sitting off by themselves, nursing some sort of injury.

Shelly’s White Orpington girl, Maizie, was not eating with her usual gusto. Nor was she foraging and cavorting with her flockmates like usual. Instead, the year-old pullet was keeping to herself, her feathers droopy and her disposition even more so.

Concerned, Shelly carefully examined her languid layer, only to discover a dark grey-purple spot on the side of the bird’s pale pink beak. Thinking it was dirt, Shelly attempted to rub the smudge off. Maizie reacted accordingly, squawking loudly and indignantly leaping off Shelly’s lap. Shelly was shocked.

“I didn’t think chickens felt pain,” she messaged me. “Could that be a bruise?”

According to Dr. Laurie Hess, DVM and Diplomate of the American Board of Veterinary Practitioners (Avian Practice), a chicken’s beak can bruise or bleed. And the wounded bird may noticeably feel the pain of its injury because of this network of nerves and capillaries.

Read more: Keep your flock in tip-top shape with these 5 health tips.

Just as in humans, a bruise on chickens’ beak results from some sort of physical trauma. This trauma causes the capillaries near the site of impact to break, releasing blood that pools beneath the surface of the skin.

In the case of a beak injury, the blood pools beneath the outer keratin layer. This produces a bruise that may appear purple, gray, blue or brown, depending on the color of the beak.

Since chickens use their beaks for everything from preening and eating to fighting and mating, there are ample opportunities for a beak injury to occur. An aggressive pecking-order battle or an overzealous rooster could be the cause behind the bruise.

Not all injuries originate from another bird, however. Chickens can hurt themselves by falling off their perch while they sleep or by running into a wall, a tree or other immoveable object while their attention is temporarily diverted (by, for example, a butterfly).

Lamentably, little can be done to treat a bruise other than icing it and gently massaging the injury. But neither of these treaments would work on a beak due to the thickness of the keratinous layer.

Fortunately, a chicken’s beak, like its talons, is in a continual state of growth. This means that the bruise mark will slowly work its way down to the very tip of the beak, where it will be ground away by regular daily use.

There are, however, several steps to take should you notice that your bird’s beak is bruised:

Fortunately, Shelly found no further injury upon inspecting Maizie’s beak. Since her microflock consists of the White Orpington and three other sweet-natured Orpington pullets—all of whom worriedly hovered close by while Maizie was being examined—Shelly could only conclude that Maizie’s bruise was somehow self inflicted.

“I guess that’s life with chickens, huh?” she messaged me later. I couldn’t have said it better myself.