Why Make Your Own Solar Oven?

Two kids dish on why making a solar oven is the best family project ever. 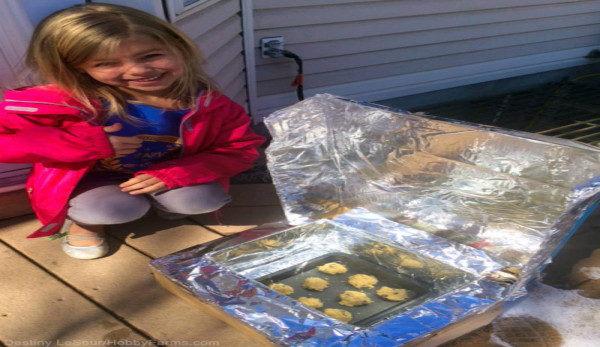 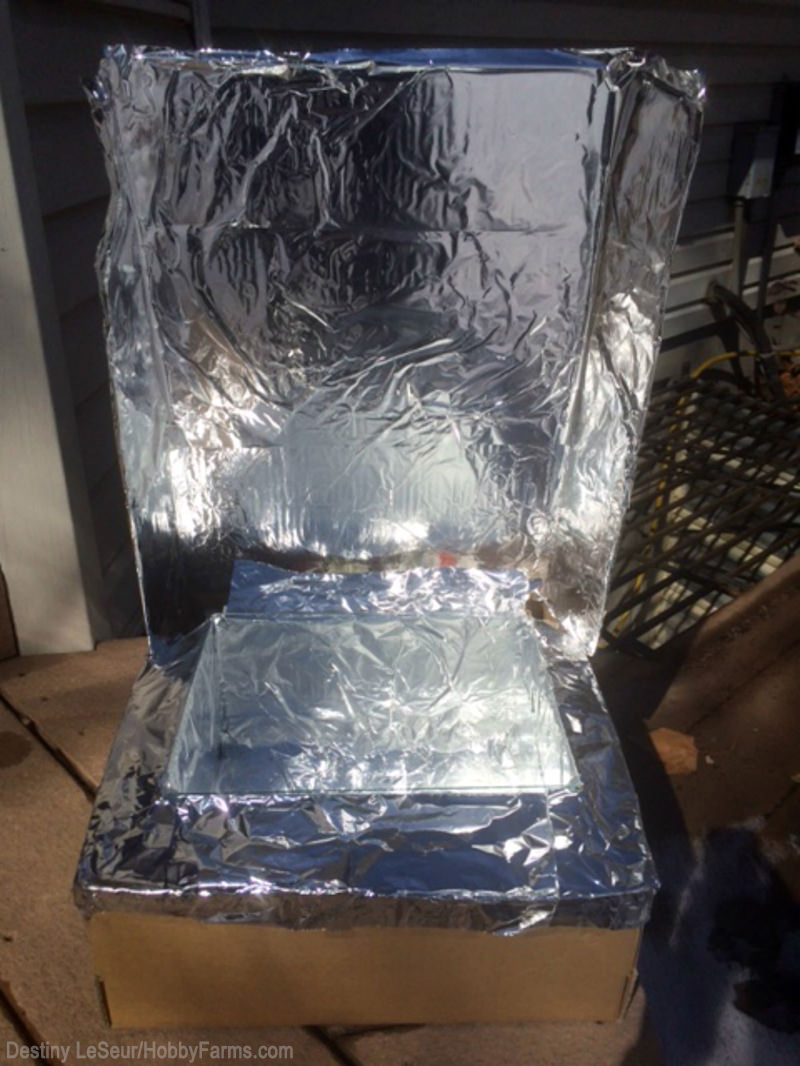 Have you ever heard of a solar oven? Until a few years ago, I didnâ€™t know such a thing existed! An oven that requires no electricity or gas and works entirely with the solar energy of the sunâ€”what is this magic?

After some research, our family decided to buy a brand-name solar oven and learn to use it. The process has gone really well in our sunny climate. The best part for this distracted homestead mom is that itâ€™s really hard to overcook things in the solar oven, though the size is a bit too small for our family of seven.

Weâ€™ve considered building our own solar oven to create some additional cooking space, and fortunately, we have some school friends who have paved the way for us. They recently made their own solar oven, so we picked their brains a bit on how to do it. Our friends Maddie, age 6, and Lindon, age 9, share their insight below about making your first solar oven and what to bake in it. 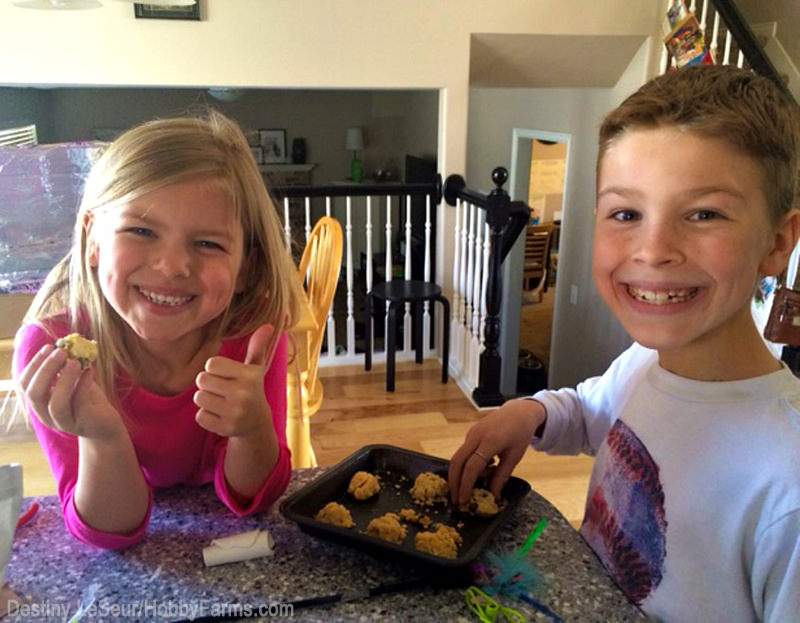 Why Make Your Own Solar Oven?

As Maddie and Lindon discovered, the best reason to make your own solar oven is because you can. The design is simple enough that children can make one themselves, maybe with some light supervision depending on their ages. My friends used two boxes, one that fit inside the other. They insulated the inner box using wadded up newspaper and used aluminum foil to reflect the sun into the oven. They also used a sheet of sturdy glass to cover it with so that the heat stayed inside.

CommonSenseHome.com offers several different solar-oven designs, including one using an inner tube, as well as a few recipes. Building your own will allow you to fiddle around with the size and shape so that you can get it just right for your family. Plus, building versus purchasing will save you a lot of money. Maddie and Lindon talked as if it was really no big deal to put it together; you just need to assemble all the parts and you have a working oven.

What Should I Make In a Solar Oven?

Cookies! I suppose I could have guessed that, and we agreed that this was a great reason to make a solar oven. Cookies are a rewarding first recipe, but bear in mind that the cookies will have to bake bit longer than they would in a conventional oven. 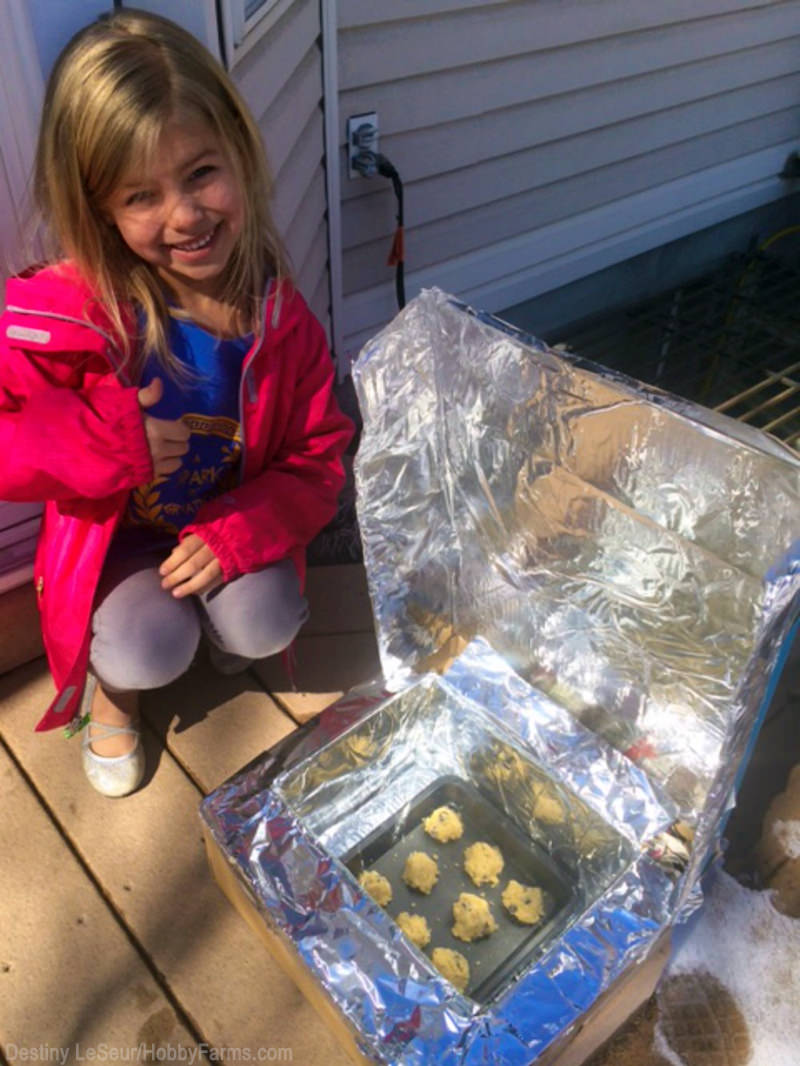 Maddie and Lindonâ€™s cookies took between one and three hours to bakeâ€”there was some contention between the siblings on this pointâ€”because it was a little cloudy. Plus, they were baking in winter, and the sun is never as strong in the winter as it is in the summer. Thatâ€™s not to say it wonâ€™t cook, because it willâ€” even if thereâ€™s snow on the ground! We did have a discussion about how itâ€™s important to remember to turn your solar oven to follow the sun so that your cookies will continue to bake. I fessed up that when I fail at solar oven cooking, itâ€™s usually because I forget to do that very thing.

Maddie and Lindon plant to tackle brownies next. I asked if they might cook some real food in their solar oven and Lindon said noâ€”heâ€™s sticking with the treats. Maddie would like to try hot cucumbers, though. Interesting. Then she settled on pizza. Wise girl. We talked about how you can use racks in a solar oven to bake several things at once.

We agreed that cookies are a necessity, so we decided that having a solar oven on hand is a good idea in case thereâ€™s a blackout or earthquake and you canâ€™t use your regular stove. Plus, in emergency situations, you canâ€™t just go to the store and buy cookies. I told them that when I lived in Russia, several times I had money but couldnâ€™t buy anything because the stores were empty due to the struggling economy. American children donâ€™t really get that idea but I could see that they were thinking about it. These are good kids who have been taught that gratitude is a virtue.

Maddie and Lindonâ€™s solar oven didnâ€™t take long to construct and was made from materials they already had around the house. Plus, once theyâ€™re done with it, they can recycle all the parts. So thereâ€™s no significant cost to construct it (if youâ€™re using cardboard boxes), no negative impact on the earth to run, and once itâ€™s served its purpose, you can send it off to become something else at the recycling plant. Sweet.

We also chatted a bit about taking it camping, and although Maddie was game, Lindon was hesitant to do that because of possibly damaging it. I told them about a friend of mine when I was younger that would go to the beach and bake potatoes on the dashboard of his car just by using a reflective material like aluminum foil and a pan.

We decided we are grateful for the sun and all the wonderful things it does for us. Special thanks to my friends Maddie and Lindon and their awesome mom, Destiny, for letting me chat with them. When I asked them if there was anything else they wanted to say, Lindon replied, “It was awesome!â€ť and Maddie agreed with an “It was super awesome!â€ť So there you go.

Get more kid-friendly projects on HobbyFarms.com: