Why Pastured Pigs Are Better

When it comes to raising pigs, sunshine and open air makes all the difference. 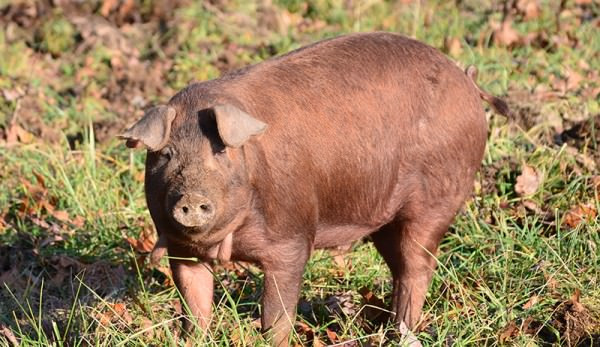 Iâ€™m a sustainable farmer, and I feel your painâ€”even I donâ€™t know what the food label of the momentÂ means half the time. Thereâ€™s a whole lot of, ahem, “compost“ going on in terms of food marketing these days, and the natural-food section houses some of the most confusing examples of this ballyhoo. Grassfed, grass-finished, cage-free, free-range: Does any of this even mean anything?

While some natural-food labels mean almost nothing (Iâ€™m looking at you, cage-free), Iâ€™m here to personally vouch for one specific term, the adjective that modifies the farming methods I employ: pastured. Over the years, Iâ€™ve pastured chickens and, of course, cows, but the animals I feel most benefit from pasturing (which, in turn, benefits humanity) are pigs. I whole-heartedly believe that pastured pigs areÂ better than raising them via conventional methods.

Better For The Animal

Itâ€™s no secret that conventional livestock farming methods generally sustain operations at the expense of animal welfare, and this reality is perhaps most true in the case of pork farming. In concentrated animal feeding operations (CAFOs) used on factory farms, pigs are raised inside a large warehouse-like structure, on bare, concrete floors. Conditions created by manure build-up are technically poisonous, a situation remedied by regular administration of antibiotics to the animals. Piglet tails are snipped at an early age, as close quarters and boredom would lead them to chewing otherwise, and sows are kept in metal cages that squeeze the animalsâ€™ sides and prevent movement, with regular breeding occurring via artificial insemination.

The appeal of raising pigs outside, on grass and soil, is evident: Pigs get to be pigs, rather than just a commodity exploited from birth to death for a few packs of bacon. Watching pigs run through open sunny pastures or waddle up a forest hill seems so natural. Pork is one of my favorite proteins, and I wonâ€™t deny my pigs experience one bad day, but Iâ€™m proud that all the days preceding it are pretty great.

Better For The Environment

Thousands of pigs raised inside undersized warehouses generate literal tons of waste: One finishing pig can produce up to 6 cubic feet of manure per month. In conventional hog operations, this material drains into gigantic lagoons, but these fill up quickly and require emptying. One common (and perfectly legal) way of disposing of liquid manure is to blast it from whatâ€™s known as a â€śmanure cannonâ€ť into the air over fields, ostensibly as fertilizer. The airborne fecal matter also drifts to neighborsâ€™ living spaces and into whatever water sources are nearby. Elevated rates of health issues are common in such communities.

Pastured pig operations stink, too, but the stench isnâ€™t comparable to a factory farm. For starters, pastured-pig farmers raise far fewer pigs than conventional operations, which are specifically designed for maximum production, so manure output is also less. And while manure management is still a concern for pastured operationsâ€”we donâ€™t want it getting into local streams and riversâ€”pasturing allows feces to drop directly to the ground, improving soilâ€™s health. Finally, in pastured operations, nobody makes it rain hog poop, which seems inherently superior to me.

Better For The Farmer

While conventional hog operations do offer unprecedented numbers of pigs, volume is just one of the factors that affect a farming operation. The conditions associated with conventional hog farming require routine treatment to maintain pig health, including daily antibiotics, deworming medication and lice treatment. These treatments arenâ€™t free.

In comparison, on my farm, weâ€™ve never had to buy a single medication for our pigs. While pasturing doesnâ€™t eliminate the potential for pathogens or parasites, sunshine, fresh air and manageable herd sizes go a long way to producing healthy pigs. Furthermore, pastured pigs raised without unnecessary antibiotics carry a much higher value for customers who want, and are willing to pay for, meat farmed this way.

Better For The Consumer

If youâ€™ve ever had a pastured pork chop, then you know the best reason to buy the more expensive cut is that it tastes amazing. The most common comment Iâ€™ve heard at market goes something like, â€śYour meat actually tastes like pork!â€ť And while taste is certainly a valid reason to choose pastured, there are health benefits, as well.

Antibiotic-laden meats are thought to contribute to antibiotic resistance and infection frequency in humans; pastured meats, on the other hand, donâ€™t deliver unnecessary drugs to the eater. Pastured pigs also deliver better-quality fat, with a healthier omega 6:omega 3 ratio, which is kind of ironic when you consider low-fat CAFO meat was once touted as the healthy choice.