When it comes to farm problems, changing the way you farm may be better in the long-term than a reactionary solution. 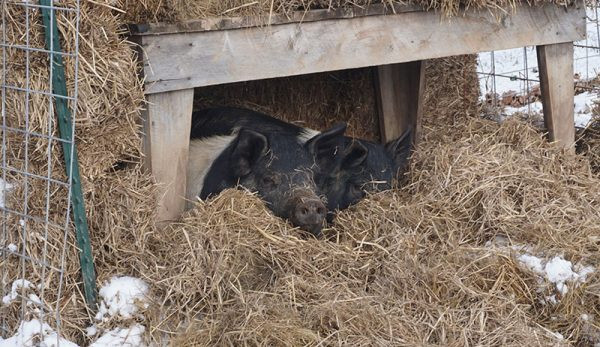 Everybody know that pigs squeal. That squeal is pretty loud, but just how loud?Ā Measured in decibels (Db), or the intensity of a noise, a pig squeal (around 115 Db) is about as deafening as a jet engine (130 Db). As a farmer, you will probably come a lot closer to a pig than you will a jet, so for the sake of comparison, consider that a tractor may rumble along at about 85 Db, a normal conversation might be around 40 to 60 Db, and a whisper could be around 15 Db.

Despite 9,000 years of domestication and selective breeding, pigsā voices hold onto their wild heritage. Iāve listened all day long toĀ happy pigs that grunt, bark and coo at each other, whining from time to time, and then let out a piercing screeee!! just because a sibling got too close for comfort while they were eating. Pig sounds harken back to natureās intelligent design to keep these animals safe and connected with their families in the wild, not unlike most wild creaturesāand humans, for that matter. Matriarchal sows grunt reassuringly with their group of young, interestingly called a sounder. Boars scream warnings at their competitors during rutting season.

The loud vocalization is a good attempt at scaring off predators, too. The jet-engine-like intensity of sound waves pummeling the ears of an attacker could be a life-saving strategy for pig survival. This relatively naked, short-sighted, short-legged animal with its face in the dirt is pretty vulnerable, so making a lot of noise is one way to compensate for itsĀ lack of defenses.

So Why Are We Talking About Pig Squeals?

“Tractors, forage harvesters, silage blowers, chain saws, skid-steer loaders, grain dryers, squealing pigs and guns are some of the most typical sources of noise on the farm,” according to “Noise Induced Hearing Loss In Agriculture” by Penn State University Extension. I find it funny that pigs are mentioned in the list of farm machinery.

Sustained exposure to noises of 85 Db or more require some type of ear protection. Even the best earplugs might reduce the impact on your sensitive ears by only 20 Db, especially if they donāt fit properly. Farmers who run small operations or hobby farms mightĀ not suffer from noise-induced hearing loss caused by machines as quickly as large-scale producers who are running equipment all day, but it is important to be aware and protect your ears, even if it’s just for your seasonal spurts of tilling for example.Ā

From a holistic farming perspective, seeking a long-term solution is preferable to reacting to a recurring problem by patching problems up so they can be damaged again. This can apply to farming-related hearing loss, as well. Using the tilling example above,Ā you could look into no-till practices, building up your soil rather than ripping it up.Ā

So back to the pigs. Take that primal pig scream and multiply it by hundreds inside a concrete building and thereās no hope for a farmerās hearing to survive intact. So why would we want to do that to ourselves, much less the pigs?Ā

My experience with pigs is limited, but they have a certain charisma that Iām fond of. Iāve spent time with a couple of American Guinea hogs who let me scratch their bellies, and a trio of Yorkshire/Hampshire crosses that greet me with expectant grunts in anticipation of treats. Watching them coexist peacefully with each other in their 20-by-50-foot penārooting around in the soil, scratching their backs on their water tank, nestling into straw with their siblingsāleaves me wondering whatās the big deal with pig squeals. But then again, this is not a factory. Itās a small farm.

Is your farm a place where natural sounds harmonize with the landscape? Do the sounds of industrial necessities intrude and recede abruptly? If you could draw a picture of your farmās soundscape, what would it look like?

If we can find ways to diminish our reliance on noisy farm machinery, thatās great. Even better, letās try to increase our understanding of farm animals’ natural tendencies and their instinctive needs. Striving for harmony on our farms is one of our basic needs, and it leads to a more humane and peaceful environment for all creatures.