Why You Should Make Bone Broth

Bone broth is a traditional food that has lost its place in modern culture. Make your own to extend the use of your farm-raised meats. 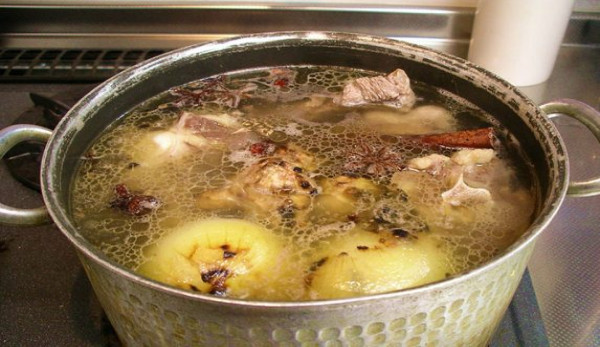 A freezer or pantry full of homemade broth is the sign of a nourishing kitchen. You already know that the bones left after picking clean your roasted chicken or thoroughly enjoying a grassfed-beef-rib meal make great stock. If you’re not going one step further and making these into bone broth, you might be missing out on nutrients that are there for the taking.

The phrase “bone brothŌĆØ can make some people question what exactly it is that they’re eatingŌĆösimilar to reactions you might get to “blood sausage.ŌĆØ But it’s the “boneŌĆØ in bone broth that’s important.

The cartilage and connective tissue in the bones are what give bone broth its flavor, and the collagen from the connective tissue provides gelatin, giving bone broth its thicker consistency, according to the Oklahoma State University Cooperative Extension. If you can get yourself and your family past the name, you can enjoy a nutritive addition to your kitchen repertoire. Rylen Feeney, director of education at The Wellspring School for Healing Arts in Portland, Ore. and Diplomat of Asian Bodywork Therapy & Chinese Herbs, coaxes people through the idea of eating the remnants of marrow, cartilage and connective tissue.

“I try to educate on the wonderful properties of the broth and the ease and cost effectiveness,ŌĆØ she says. “If they are still squeamish, I recommend they start with bought broths and give them resources or tell them to visit a good Vietnamese restaurant and have the pho [Vietnamese soup]. It should taste luscious and goodŌĆöthat is the seller. If it is just another functional-food-as-medicine, it is less sustainable and/or attractive in the long run.ŌĆØ

How to Make Bone Broth

The difference between regular ol’ broth and bone broth is one ingredient: vinegar. This releases minerals including calcium, magnesium, iron, silicon, phosphorus, sulphur and other trace minerals, from the bones. Apple cider vinegar is most often quoted in bone-broth recipes, though white vinegar or lemon juice can have the same effect. (The acid is the key.) Without vinegar, you should cook the broth for longer.

“It is good to soak the bones in water and 2 tablespoons to 1/2 cup of vinegar for 30 minutes to 1 hour before applying heat,ŌĆØ Feeney says.

She uses bones from animals raised humanely, and she likes poultry bones over beef bonesŌĆöthough that’s purely a matter of personal preference. For a beef-bone or lamb-bone broth, roast these bones in the oven before putting them in broth. To make a fish-bone broth, Feeney recommends a non-oily fishŌĆöthink cod, haddock or whiting rather than salmon, trout or swordfishŌĆöfor a milder flavor and less greasy broth.

Feeney also suggests chopping the bones with a cleaver to expose more marrow and surface area for the broth. Throw in whatever vegetable and herb scraps you have, including onions, garlic, carrots (and carrot tops), celery, ginger and turmeric, and put this on the heat. Feeney steers clear of tomatoes when making broth, because she says they will give the broth a peculiar flavor. Sometimes she will add kombuŌĆöa kelpŌĆöand cilantro or parsley toward the end of cooking.

From here, you have two choices: your standard one-shot bone broth or a continuous broth. A one-shot bone broth is good if you want a quick-and-easy broth-making session so you can freeze, can or immediately use a bunch of broth. A pressure cooker or regular pot on the stove is all you need. Bring it to a low boil, then simmer for hours. The Jade Institute, a center for Oriental medicine in Seattle, recommends simmering for six to 48 hours for chicken bones and 12 to 72 hours for beef.

Making a continuous bone broth is useful if you use broth nearly every day. Turn your slow cooker on low, and dip into the broth as needed. Replace that amount with water, plus another splash of vinegar. Over time, the bones will become soft because the minerals have been leached, and then you can throw them away. Feeney shies away from continuous bone broth because it’s not safe to leave a stove on when you’re not keeping an eye on it, and she doesn’t like the consistency of bone broth made in her slow cooker. “I feel like I start to lose flavor at a certain point,ŌĆØ she adds.

“If you are using bone broths daily in large quantities, I see the value of a ‘perpetual’ broth,ŌĆØ she continues. “I typically only recommend daily larger quantities in acute conditions; otherwise, I believe it should be part of a healthy diet, not necessarily daily or in large quantities.ŌĆØ

There are a lot of claims about bone broth’s health benefits, and like any food or nutritional supplement, bone broth can provide benefits when consumed in moderation.

“Americans are frequently of the mind, if a little is good, more is better,ŌĆØ Feeney says. “I rather promote moderation and using foods in a sustainable and reasonable amount that would be akin to how it was eaten in a traditional diet. For example, for healthy or individuals well on the road to healing, I would recommend more broth in the fall and winter months than in the spring and summer; I would use it in traditional ways and not try to use it in a novel way or in everything.ŌĆØ

Broth, of course, is a go-to soup base. It’s also useful for cooking rice (in place of water) or braising vegetables to add nutrition to your dish.

“My favorite use is truly just drinking it as broth with a handful of greens; a scoop of miso (to alkalize and add probiotic) and turmeric (for inflammation and added immunity boost); and some rice or leftover tofu, chicken or an egg, for breakfast. It is a supreme comfort food for me,ŌĆØ Feeney says.

“Bone broths are one of those things, like fermented foods and offals, that just slowly disappeared from the American diet,ŌĆØ says Feeney, who recommends bone broths for clients whose digestive systems have been compromised through use of antibiotics, processed foods and digestive-tract issues; who are recovering from chemotherapy and surgery; and who are experiencing a range of other health conditions, including tendonitis and joint conditions, anxiety, fatigue, anemia, Lyme disease and more.

Feeney points to intestinal health as a cornerstone of holistic medicine and says bone broth can improve digestive microflora and intestinal permeabilityŌĆöthe cause of leaky gut syndrome. Additional health benefits reported by holistic-medicine practitioners include liver detoxification; reducing inflammation and joint and muscle pain; promoting sleep; and improving skin, hair and bones. You can read more about the benefits of bone broth in Feeney’s article, “The Power of the Almighty Bone Broth.ŌĆØ

The only caution, Feeney says, is that if you’re on a strict renal diet, bone broth might not be the food for you: “It is rich in four nonessential amino acids: proline, glycine, alanine and glutamine. So although it’s not high in essential protein, it may be too high in overall protein for daily or frequent consumption by someone who has severe kidney damage.ŌĆØ

There is debate over the validity of bone-broth health claims, but whether you are for these reported benefits or you side with the skeptics, the care and cooking behind bone broth and the return to a traditional foodstuff may still be attractive to you in a fast-food world and a way to get more out of the meat you raise.